On July 30, 2015, Benedict retweeted the Hamas Twitter account, which had posted an Amnesty publication and added: “As evidence of Israel’s war crimes amass, tangible steps towards accountability are needed.” 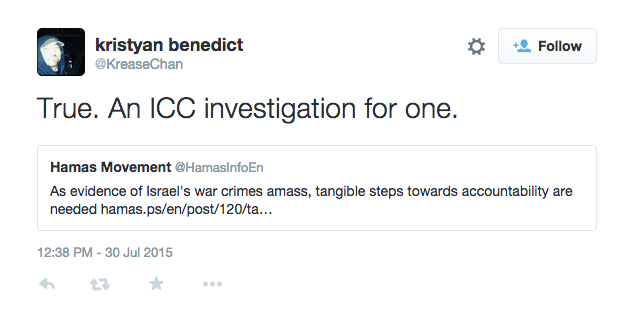 When asked if Amnesty would hold an event on kidnapped Israeli Soldier Gilad Shalit, Benedict answered, “Could do, why not? We will also talk about the thousands of Palestinian prisoners as well. We will have to do that if we want to be consistent.”

Regarding the Amnesty-UK event where a speaker accused Israeli soldiers of carving a Star of David into a child’s arm: an audience member reported that, after he challenged the source of the image depicting the Palestinian boy’s arm, Benedict said he would, “smack me in my little bald head.”