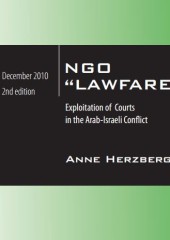 On December 9, 2010, NGO Monitor released an expanded edition of the “NGO Lawfare” monograph. The publication demonstrates and analyzes the ways in which non-governmental organizations (NGOs) using the language of human rights are exploiting European and US courts. These groups have initiated criminal and civil cases against Israeli officials for supposed “war crimes,” as part of lawfare – the use of legal frameworks to achieve political and military goals.

The monograph documents the central roles of groups such as the Palestinian Center for Human Rights (PCHR), Al Haq, and others in implementing strategies for the prosecution of Israelis. PCHR has repeatedly sought to have Israeli officials arrested for the July 2002 targeted killing of Hamas leader Salah Shehade, who had orchestrated terror attacks that killed and wounded hundreds. Al Haq has pursued judicially imposed boycotts and sanctions against Israel in the UK and Canada.

The report details EU funding for PCHR, which was provided in a non-transparent manner. PCHR used these funds for lawfare conferences and strategy sessions. [Click here for image of an EU-funded conference]

The updated monograph also documents the ongoing Goldstone process, in which NGOs have been lobbying Western government to support the implementation of the report’s unfounded recommendations, including cases against Israelis in the International Criminal Court (ICC).

NGO Monitor’s September 2008 Lawfare report was the first in-depth study of the role of NGOs in promoting the expansion of “universal jurisdiction” statutes worldwide; the creation of the lawfare strategy against Israel at the infamous 2001 Durban Conference; and the leading role NGOs have played in these cases. The updated report also documents funding from the EU, a number of European governments, the Ford Foundation, and George Soros’ Open Society Institute for the main NGOs promoting lawfare.

NGO “Lawfare”: Exploitation of Courts in the Arab-Israeli Conflict

The use of courts to prosecute violations of human rights has grown exponentially since the 1990s. This growth has coincided with the vast accumulation of power by nongovernmental organizations (NGOs) and the expansion of the concept of “universal jurisdiction.” NGOs claiming to promote human rights (many funded by European governments, the EU, and prominent foundations such as the Ford Foundation, the New Israel Fund, and George Soros’ Open Society Institute) are engaged in international lobbying, as well as filing civil lawsuits or initiating criminal complaints in Belgium, England, Spain, Switzerland, the United States, and elsewhere against Israeli officials for alleged “war crimes” or “crimes against humanity.”

These legal actions, ostensibly to provide “justice” to “victims,” are a form of “lawfare” [1] – a “strategy of using or misusing law as a substitute for traditional military means to achieve military objectives” – intended to punish Israel for anti-terror operations, as well as to block future actions. They are also a means for actors that are not accountable to any form of democratic check to subvert a country’s foreign policy and interfere with diplomatic relations. While Israel is not the only country that has been subject to NGO lawfare (several prominent NGOs have filed similar suits against US officials in France and Germany), it is a primary target of these efforts. Though claiming to promote universal human rights, these same NGOs have not pursued cases against Palestinian, Hezbollah, Syrian, or Iranian officials involved in terror.

The strategy to delegitimize Israel using legal frameworks was adopted at the NGO Forum of the 2001 UN World Conference Against Racism held in Durban, South Africa (“WCAR” or “Durban Conference”). The NGO Forum crystallized a plan in which Israel would be singled out as a “racist” and “apartheid” state; isolated internationally through a campaign of boycotts, divestment, and sanctions; and explicitly adopted lawfare to advance the political war against Israel. [2] The NGO Forum Declaration called for the “adoption of all measures to ensure [the] enforcement” of international humanitarian law, including “the establishment of a war crimes tribunal to investigate and bring to justice those who may be guilty of war crimes, acts of genocide and ethnic cleansing and the crime of Apartheid . . . perpetrated in Israel and the
Occupied Palestinian Territories.”

This movement is led by Palestinian NGOs such as Al Haq, the Palestinian Center for Human Rights (PCHR), Al Mezan, and Badil, and aided by international NGOs including Human Rights Watch, Amnesty International, International Federation of Human Rights (France), and the Center for Constitutional Rights (New York). Israeli NGOs Adalah, Public Committee Against Torture in Israel (PCATI), Yesh Din, and others also figure prominently. These organizations are largely supported by European governments and receive funding from the abovementioned foundations.

This monograph presents a number of case studies analyzing the central role that NGOs have played in the strategy of lawfare, using it to further their political campaigns against Israel. The study begins with a discussion of NGO involvement in the movement to promote and expand the concept of universal jurisdiction and the creation of the International Criminal Court (ICC). Without these legal developments, this NGO strategy would not be possible.

Second, the paper will detail anti-Israel lawfare at the international level, examining the development of the tactic at the NGO Forum of the 2001 Durban Conference; alternative strategies adopted by the NGO network in lieu of criminal prosecutions of Israelis at the ICC, such as European government- and EU-funded conferences on prosecuting Israeli “war criminals,” and lobbying campaigns; the International Court of Justice case against Israel’s security barrier; and international “fact-finding” missions on the 2009 Gaza war. As in other politicized NGO campaigns, these activities consistently draw an immoral equivalence between anti-terror operations and mass scale atrocities, minimize or omit the context of terror, exploit international legal terminology and rhetoric, level condemnations without providing proper bases or reliable evidence, and use incomplete, distorted, or inconsistent legal definitions.

Third, the monograph discusses NGO-led litigation against Israel in the national courts of Europe and the United States. Because Israel has not ratified its participation in the International Criminal Court (ICC) due to serious political and legal concerns, NGO lawfare has generally been pursued in national courts where “war crimes” statutes or other universal jurisdiction laws have been enacted. The lawsuits detailed in this study include the case against Ariel Sharon in Belgium for his alleged responsibility for the Sabra and Shatila massacres; the arrest warrant issued against Doron Almog in the United Kingdom for alleged “grave breaches” of the Geneva Convention; the private criminal suit filed in Spain against seven Israeli officials for their alleged role in the targeted killing of the founder of Hamas’ military wing, Salah Shehade; attempts in the UK to arrest Ehud Barak and Tzipi Livni for alleged “war crimes” committed in the Gaza war; the filing of a criminal complaint in the Netherlands against Ami Ayalon for “torture”; civil cases in the US against Avi Dichter for his alleged role in the Shehade operation and against Moshe Ya’alon for his alleged participation in the 1996 IDF operation in Qana, Lebanon; and, finally, cases initiated in the US and the UK intended to block corporate trade with Israel.

As a US Court of Appeals observed, these cases seek to engage courts “in the micro-management of military targeting decisions” and are not cases such as those against “an Idi Amin or a Mao Zedong.” [3]  Plaintiffs point to no cases where “similar high-level decisions on military tactics and strategy during a modern military operation have been held to constitute torture or extrajudicial killing under international law.” [4] While these cases were all dismissed in the preliminary stages, the media coverage was highly damaging, fulfilling one of the NGOs’ central
goals.

As a result of these cases, several countries, notably Belgium and Spain, have amended their laws to prevent future abuse. Such amendments have included denying NGOs the ability to apply to a judge directly for an arrest warrant without consulting any government officials. Yet, these lawsuits continue to have serious political and diplomatic repercussions, including severely limiting the ability of Israeli officials to travel abroad. And the media impact remains an important element in the demonization of Israel.

This report also highlights the lack of transparency and accountability of NGOs, and their contribution to diplomatic and political tension, and even greater conflict. Analysts have noted that the “single-issue” focus of many NGOs that claim to promote human rights makes them “less concerned with the balancing of interests required of policy leaders.” [5] NGO officials use lawsuits to promote their personal ideologies and foreign policy goals, and are not accountable to a democratic polity. Instead of engaging in debate and making the difficult choices of nation-states, such as how to weigh sovereignty and security concerns with human rights, these NGOs advance their political agendas regardless of the wider impact of their actions.This self-interested view in the midst of a complex geopolitical environment, such as the Arab-Israeli conflict, entrenches conflict, and paradoxically, leads to a dilution of the universality of human rights.

[2] For more information on the Durban Conference, see Gerald M. Steinberg, “The Centrality of NGOs in the Durban Strategy,” Yale Israel Journal, Summer 2006, available at http://www.ngo-monitor.org/article.php?viewall=yes&id=1958.