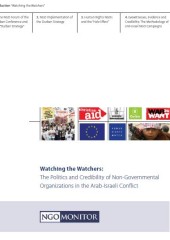 In this publication our goal is to provide an overview of the NGO network as it operates in the Arab-Israel context and to examine the credibility of NGOs in a systematic manner. We begin with the NGO Forum of the United Nations “Durban Conference”, which adopted the strategy to demonize and delegitimize Israel, based on the language of human rights and international law. Specific examples in which the NGO network has implemented the Durban Strategy are then cited and analyzed in detail, including patterns of double standards, in contrast to the claims of universality. Based on these examples, we take a step back to analyze the nature of the NGO phenomenon, and the process by which these organizations – largely unaccountable to any outside body – gained so much political power. We also analyze the “halo effect”, by which journalists, academics, diplomats and other opinion makers have repeated NGO reports, without question or independent verification, thereby enhancing the political impact of biased NGO officials.

Finally, we examine the “research” methodologies that are prevalent in the NGO community, with numerous examples in which NGO claims were shown to be false, lacked credibility, or could not be independently verified. This process reached new levels during the 2006 fighting in Lebanon, in which NGO publications, largely condemning Israeli responses to Hezbollah attacks, were found to be based on “eyewitness” claims which were unsupported and blatantly false. When the details were revealed weeks or months later, the political damage, in the form of further delegitimization, had already been done.