For a PDF Version of this letter, click here.

I am writing as head of NGO Monitor (www.ngo-monitor.org), a Jerusalem-based research institute that analyzes the rhetoric, publications, and funding of non-governmental organizations (NGOs) in the context of the Arab-Israeli conflict. Also, as a professor of political science at Bar Ilan University, I examine NGO credibility, bias, and the implications for journalists and decision-makers who rely on these powerful but unaccountable political organizations.

I would like to raise concerns regarding your statements, Twitter posts (see appendix), and other activities you have undertaken surrounding the village of Susiya in the West Bank.  These appear to reflect an unwarranted reliance on a number of highly biased political advocacy NGOs, including one that participates in the BDS (boycott, divestment, and sanctions) campaign’s efforts to isolate Israel politically, economically, culturally and militarily, and attack corporations that do business with Israel.

The reliance on these NGOs includes your July 28 letter to Prime Minister Netanyahu, social media posts, and sponsorship of a September 28 NGO briefing on Capitol Hill (see appendix). These activities raise major concerns regarding the absence of due diligence. Each item reflects the systematic bias and methodological failures of NGOs such as Rebuilding Alliance and B’Tselem.

In essence, your statements on Susiya reflect the tendentious allegations of these NGOs, erasing key facts that contradict their claims. It is regrettable that only one side of the Susiya story has been presented. I would kindly ask you to examine these omitted details, which can be found in decisions of the Israeli High Court of Justice, from the Israeli Embassy, and elsewhere.2

I would urge you to reexamine the details in the light of this information, and look forward to your response.

Appendices: Tweets, Invitation to briefing, and Information on Rebuilding Alliance 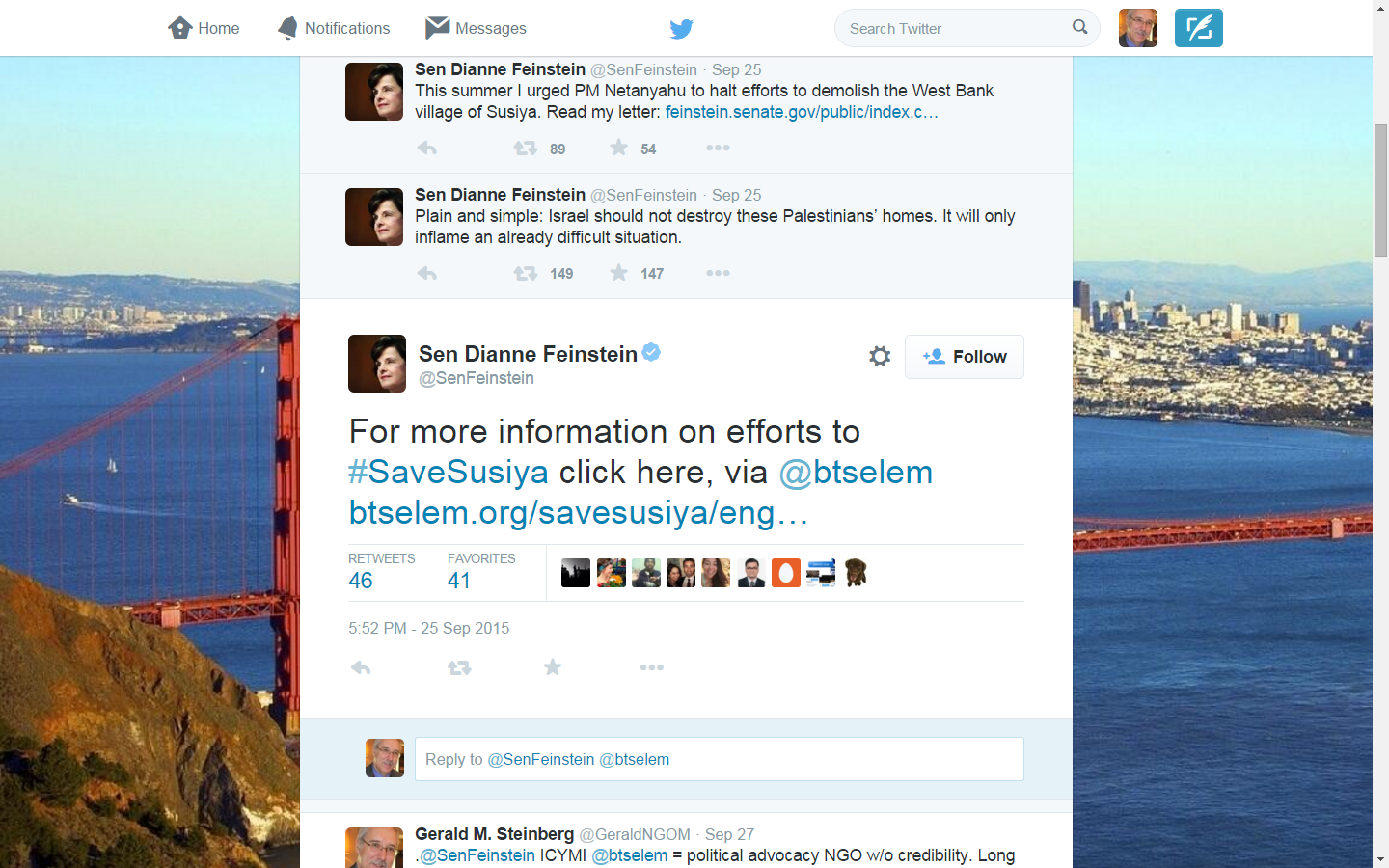 Washington, DC – As a follow-up to her tweets last Friday, the Sen. Dianne Feinstein (D-CA), is sponsoring a briefing on Monday, Sept. 28 at 3 pm in the Dirksen Senate Office Building Room SD106 called, “Face to Face with the Children of Palestinian Villages Slated for Demolition: Calls from Congress Keep their Villages Standing.” The children of Susiya and Umm al Kheir will describe what peace means to them. Their parents, who hold clear and undisputed title to their land, will describe what it is like to live under the threat of village demolition from Israel. The American nonprofit sponsoring the delegation, Rebuilding Alliance, will urge members of Congress to make calls to the State Department and the Israeli Embassy today to stop the bulldozers.

Sen. Feinstein personally met with the delegation on Tuesday, Sept. 22, listened to their stories, asked the Palestinian children from Susiya and Umm al Kheir to sit in her desk chair, and gave them hugs. On Friday, Sept. 25th, Sen. Feinstein tweeted: “Plain and simple: Israel should not destroy these Palestinians’ homes. It will only inflame an already difficult situation.”

Sen. Feinstein’s support follows her July letter written to Israel’s Prime Minister Benjamin Netanyahu in which she wrote: “Instead of taking action to demolish the village, the ICA [Israeli Civil Administration] should reexamine its decision to deny Susiya’s petition for a master plan so that the area’s Palestinian villagers can live in peace and with legal certainty.”

The Palestinian village of Susiya, located near the city of Hebron in the south of the occupied West Bank, is currently home to 55 families who hold title to their land. Half of the homes in Susiya and all of the community’s public structures are located in Area C where, according to the Oslo Accords, Israel was to hold only temporary control over planning and zoning. In 2013, as part of an extensive town planning program funded by the British, French and Belgians, Susiya submitted a professionally developed master plan to Israel’s occupation authorities who rejected it, arguing that the villagers would be better off living somewhere else. With the help of the non-governmental organization Rabbis for Human Rights, the villagers petitioned the High Court of Israel to allow reconsideration of their master plan.  Due to U.S. and international outcry, demolitions were forestalled. Negotiations with the Israeli army are now underway.

“When my family was forced from our homes in 1986, along with everyone in our village, we were devastated,” said Fatma Nawaje, founder and Executive Director of the Rural Women’s Association of the South Hebron Hills. “Our neighborhood never recovered. Don’t let this happen again.  We ask Americans to hear our story and urge their members of Congress to press Israel to recognize our right to plan our future on the land we own, just like people in towns everywhere else in the world.”

It is nearly impossible for Palestinians to obtain permits from Israeli authorities to build in Area C, part of Israel’s policy of restricting the growth of Palestinian population centers there while expanding Israeli settlements on Palestinian land. According to a new UN report, Under Threat: Demolition Orders in Area C of the West Bank, the Israeli Army’s Civil Administration has over 11,000 demolition orders currently pending against Palestinian homes, schools, barns, and water cisterns.

“We’re especially concerned because on June 9th the High Court of Israel denied the right of Palestinian villages in the West Bank’s Area C to plan their own communities, leaving all decisions on zoning and planning to Israeli occupation authorities with no direct Palestinian representation when it comes to the future of their towns,” said Donna Baranski-Walker, Executive Director of Rebuilding Alliance. “Palestinian families are being denied building permits and issued demolition orders without any way to stop this. However, when Congress calls, the Israeli Embassy listens.  Calls from Congress stop bulldozers. This summer, the outcry for Susiya including from members of Congress and the U.S. State Department, stopped the Israeli Army from demolishing their village in July. All that’s needed is for constituents to ask their Senators and Representatives to make these calls, urgently, on their own behalf as constituents.”

Rebuilding Alliance is dedicated to rebuilding war-torn communities and bringing the world together to make them safe. Visit our website here for more information.