Following NGO Monitor’s detailed research on Spanish government funding from 2009 to 2011 for over 40 political advocacy NGOs that promote political warfare targeting Israel, Prof. Gerald Steinberg was invited to address a group of Spanish MPs from different parties across the political spectrum and government officials.

The session on July 17 was organized by the legal committee of ACOM (a Spanish group focusing on the political relationship between Spain and Israel).

The presentations examined the previous federal NGO funding and recent changes, as reflected in the increased transparency and reduction from an average of €5 million annually for 40 NGOs to €1.6 million total for 3 political NGOs, as shown in NGO Monitor’s recent update.

The counterproductive activities of these grantees were also examined in detail. The participants agreed to continue to exchange information and to promote NGO funding transparency and accountability.

“The MPs and government officials that we met with agreed on the importance of continuing to exchange information and promote accountability in NGO funding ,” Prof. Steinberg said. “They noted the significance of our report on Spain for 2009-2011, in which we found that millions of Euros in taxpayer funds were channeled to many of the most radical and least credible NGOs. Since our report was first circulated and discussed in the media, important funding changes have been implemented.”

Following the parliamentary session, Prof Steinberg also gave media interviews on NGO Monitor’s research agenda on Spain, and on the EU and its member states.

Prof. Steinberg (third from left) at the Spanish Parliament with members of the ACOM legal committee 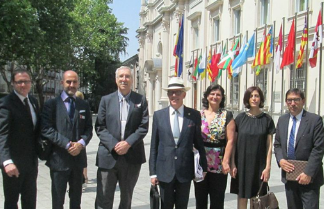 Spanish government funding is allocated to Palestinian, Israeli, and Spanish NGOs that are among the leaders in ideological campaigns to delegitimize Israel via BDS, lawfare, and other forms of demonization.

Key Issues in this Press Release