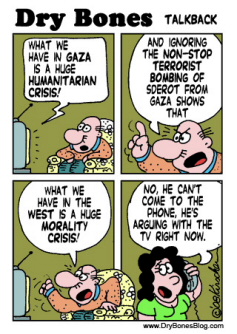 Two distinct groups of NGOs have emerged in recent weeks, with some participating in the campaign of false accusations and double standards against Israel’s responses to Hamas attacks from Gaza, while another group denounced the anti-Semitism of the Durban NGO Forum. The first group includes Amnesty International, Oxfam, World Vision, Human Rights Watch, Christian Aid, FIDH (France), Defence for Children International, as well as other groups (many funded by the European Union and the New Israel Fund) including Adalah, B’Tselem, Gisha, Ha-Moked, PCHR, Al-Haq, Al-Mezan, and BADIL. In their statements, press releases, and submissions to the discredited United Nations Human Rights Council [1], these NGOs aggressively promote the 2001 Durban strategy of demonization, using the politicized rhetoric of human rights, such as “collective punishment” and "crimes against humanity," while ignoring the war crimes and aggression of Hamas. A January 26, 2008 protest event organized and attended by members of ICAHD (funded by the EU) and Adalah (funded by the EU and New Israel Fund), the Alternative Information Centre (AIC), and other groups (with publicity by the American Friends Services Committee) took place near Gaza’s Erez crossing, under the slogan ‘Gaza: Lift the Blockade!’ Speakers from these groups demanded Israel open Gaza border crossings, and condemned the closures as "collective punishment". (For detailed analysis, see NGO Monitor’s January 2008 report: Analyzing the NGO Campaign on Gaza – Beyond the Rhetoric).

In contrast, a smaller group of NGOs led by Magenta (based in Holland), in cooperation with the Jacob Blaustein Institute for the Advancement of Human Rights, published a "Statement of Core Principles for WCAR [UN World Conference against Racism] Follow up".  In condemning the 2001 Durban NGO Forum, the signatories pledged to “reject hatred and incitement in all its forms, including antisemitism, to learn from the shortcomings of the 2001 WCAR, and to work together in a spirit of mutual respect. The statement also highlights the "violations of procedure in the preparatory and drafting processes, … racist treatment including violence, exclusion and intimidation against Jewish participants, and the misuse of human rights terminology in the document related to the Israeli- Palestinian conflict."

Signatories include Rabbis for Human Rights (RHR), Human Rights First, and UN Watch, as well as a number of Jewish NGOs. (See the January 13 Jerusalem Post editorial — "Averting another Durban".)  This statement, which controversially praised Mary Robinson’s very belated protest in the 2001 Conference, will have an impact if signed by many more NGOs, and contributing to a coalition influential enough to prevent abuse in tthe NGO Forum of the 2009 Review Conference, if this takes place.

In addition, on January 23, the Canadian government announced that it will not participate in Durban II and takes a "firm stance" against the conference.  In making the decision, Canada’s Minister of Foreign Affairs remarked that Durban I “’degenerated into open and divisive expressions of intolerance and anti-Semitism that undermined the principles of the United Nations and the very goals the conference sought to achieve” and concluded that despite Canadian efforts, the preparatory process for Durban II would not “remedy the mistakes of the past.’” The policy decision was endorsed by the two main Canadian opposition parties – the Liberals and NDP. (See also "Gearing up for another Durban", Anna Morgan, The Toronto Star, January 20, 2008; "Shun Durban II", Marni Soupcoff, The National Post (Canada), January 25, 2008; "What’s at stake at Durban II", David Frum, National Post, January 26, 2008).

[1]   Al Haq and Defence for Children International submitted a written statement to the Council.

B’tselem, in a January 16 statement, condemned the murder of Carlos Andrés Muscara Chávez, a 21 year old Kibbutz volunteer and visitor to Israel from Ecuador.  He was killed by a Palestinian sniper as he worked in a potato field (video footage of the attack can be viewed here). B’tselem’s statement dismissed Palestinian terror groups’ argument that (in B’tselem’s words) “all means are legitimate in fighting for independence against a foreign occupation,” insisting to the contrary that, “Attacks aimed at civilians undermine all rules of morality and law.” The murder was not condemned by other NGOs claiming to promote universal human rights and international law.

Ha’aretz (January 8, 2008) reported that Ittajah organized a "partially successful Arab boycott of Jewish philanthropists who are visiting the country to learn more about the problems facing Israeli Arabs. The task force, comprised of members of about 70 Jewish organizations from North America and Europe, was set up two years ago to advance social projects and strengthen local Israeli Arab leadership." Ittijah—a radical Palestinian NGO which played a prominent role at Durban 2001, and organized a October 2007 conference to further the anti-Israel boycott campaign—"asked Arab officials to cancel planned meetings with the group because Diaspora Jewry advocates the idea of Israel as a Jewish state." Ittajah also sought assistance from the Islamic Movement (Israel), which joined Ittajah in urging the cancellation of the delegation’s visit to an Islamic Movement pharmacy in Umm al-Fahm. Haaretz also reported that some Israeli Arab leaders condemned Ittajah’s boycott.

The Arab Association for Human Rights (HRA) (which has received funding from the European Union via the Partnership for Peace Programme, the UK Government and Oxfam) states that its mandate is "the protection and promotion of international human-rights standards of the Palestinian Arab minority in Israel." However, HRA often exceeds this mandate, using inflammatory language, selective reporting of "eyewitness" testimony and emotionally charged anecdotes to vilify Israel.

Continuing this pattern, in January 2008, HRA launched a "Discrimination Diary", which will feature reports chronicling "the personal stories of Palestinian citizens who have experienced institutional and individual discrimination in their daily lives." The first such report, entitled ‘Little Arafat‘, describes the "humiliating experiences" a sixteen-month old Arab Israeli child and his father encountered while searching for a nursery in which to place the child. After presenting this vignette, the report asserts that "racial discrimination between Jewish and Arab citizens is found in every day life," and draws a parallel between this specific case of alleged discrimination, and HRA’s reporting on Israel’s security barrier (HRA has called the barrier "a gross violation of international humanitarian law and a serious violation of international human rights."

According to a January 27, 2007 Jerusalem Post article, Adalah (funded by the EU and New Israel Fund) plans to urge a strike among Arab Israelis in response to the Israeli Attorney General Menahem Mazuz ‘s decision not to indict officers "in connection with the killing of 12 Arabs during October 2000 riots in the Galilee." The Association for Civil Right in Israel (ACRI) joined Adalah in the condemnation. Adalah also claimed it plans to "seek international legal mediation, including the intervention of the United Nations." As NGO Monitor has reported, Adalah has been active in anti-Israel activities in the United Nations in the past; the group sent a July 2006 document to member states asking them to convene an emergency session to condemn Israel’s construction of the security barrier.

Oxfam (UK) is seeking an "Advocacy and Media Assistant (Gaza)":

Exchange on Amnesty International and the Durban conference in the Boston Jewish Advocate:

NGO Monitor in the Media

"…In west Jerusalem, a man from the foreign press department of the Israeli Government pressed a folder into my hand. Watching the Watchers is sponsored by an organisation called NGO Monitor, and argues that ‘the NGO exploitation of the rhetoric of human rights in order to attack Israel, their use of double standards, and the consistent absence of credibility in their reports, have eroded and essentially destroyed the core universality of this moral framework’…"

"’There is a learning process taking place. Rabbis for Human Rights are among the first of the NGOs who were too quiet before and during 2001 to have expressed a clear position that seeks to avoid a repetition of that disaster. That’s important.’ At NGO Monitor, ‘we believe there are also some people at Amnesty Israel who understand the importance [of this] and they need to make those concerns public, and we would expect that B’tselem and other groups who claim a human rights mandate would take a leading position along with RHR.’"

Analyzing the NGO Campaign on Gaza – Beyond the Rhetoric, January 22, 2008