Quantitative Analysis of Amnesty Publications in 2008

Using a consistent methodology, NGO Monitor has again examined all of Amnesty International’s activities related to Israel and the conflict in 2008. AI publishes five types of documents addressing human rights. Based on the relative resources required to produce each type of document, as well as its relative impact, NGO Monitor has developed a rating system by which to measure, assess, and compare each of these types of publications. This analysis clearly shows the disproportionate focus on Israel in 2008. 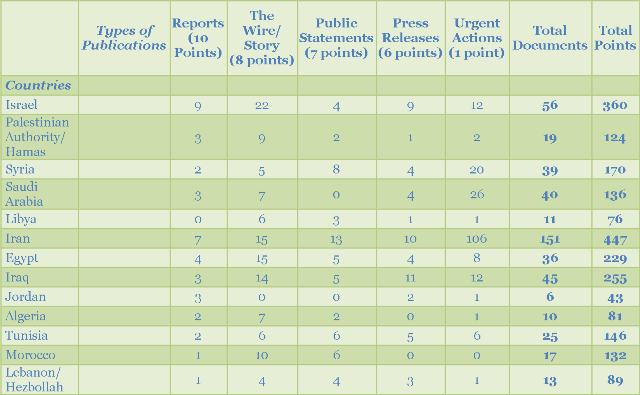 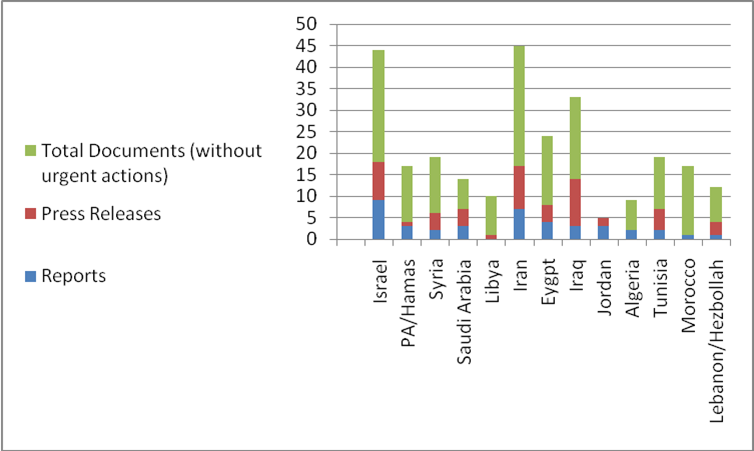 Amnesty International’s 2009 annual report (covering events in 2008) further highlights the NGO superpower’s highly biased approach.  The sections on Israel and the Palestinian Authority present a gross distortion of the conflict, including selectively reports on events which erase the context of terrorism, and ignore human rights issues not related to AI’s political agenda, while repeating un-sourced and anecdotal claims.
The 4-page summary of Israel employs highly exaggerated language and absurd allegations. Amnesty accuses Israel of “unprecedented use of force” in Gaza, “virtual imprisonment,” and bringing the Palestinians to the “brink of human catastrophe,” and charges that “impunity remained the norm for Israeli soldiers.” This echoes the highly tendentious reports and press releases on these issues published by Amnesty throughout the year, and the extreme ideological bias which is entirely inconsistent with universal human rights values.

In discussing the combat in Gaza at the end of 2008, Amnesty falsely blames Israel for “launching” an attack; the long history of terrorism and rocket fire emanating from Gaza, as well as the 6 month cease fire which was used by Hamas to  prepare for this conflict, are totally ignored.  And on the conflict involving Hezbollah and Lebanon, Amnesty immorally presents Samir Kuntar, convicted and imprisoned for murdering a 4 year-old girl, her father and others, as a political prisoner “held since 1979”; Kuntar was released along with four other terrorists in exchange for the bodies of missing Israeli soldiers Ehud Goldwasser and Eldad Regev.

Amnesty only cites alleged Israeli violations within the context of the Israeli-Palestinian conflict, while showing no interest in a genuine evaluation of Israel’s human rights record. Of four pages, only two paragraphs at the end address topics (migrant workers/refugees and prisoners of conscience) other than the Palestinians.  Other areas of concern, notably human trafficking and religious issues, remain unmentioned.

The section on the Palestinian Authority is equally ludicrous in the level of anti-Israel bias. While Amnesty belatedly acknowledges both the continued imprisonment and denial of access for kidnapped IDF soldier Gilad Shalit and the widespread indiscriminate rocket attacks on Israeli civilians in 2008, it also promotes an overwhelmingly Palestinian narrative of events. The end of the Gaza ceasefire (December 2008) is blamed solely on Israel, crudely rewriting history. AI blames Israel for a lack of health care in Gaza – and not Hamas misappropriation of resources for terror attacks, nor intra-Palestinian violence and civil war between the Palestinian factions.  Deaths from the collapse of smuggling tunnels between Egypt and Gaza are also absurdly attributed to Israel; the extensive documentation of the use of these tunnels for transporting weapons into Gaza is also erased.

In 2008, as in previous years, the record shows that Amnesty International has singled out Israel to be falsely labeled as one of the worst human rights offenders in the Middle East. As NGO Monitor’s research has demonstrated, Amnesty’s agenda is driven by ideology, and the drive for media attention and influence, not by universal moral norms. Additionally, Israel’s democratic and open society ironically invites disproportionately negative reporting from Amnesty; access to information facilitates more comprehensive research than in less democratic regimes.

Amnesty’s distortions and skewed reporting policy have greatly damaged its claim to be a defender of universal human rights. As the organization deviates from its original focus and mandate to politicized accusations against Israel, its credibility and objectivity are further eroded.

NGO Monitor’s Methodology
Amnesty International (AI) publishes five types of documents addressing human rights. Based on the relative resources required to produce each type of document, as well as its relative impact, NGO Monitor has developed a rating system by which to measure, assess, and compare each of these types of publications.

Reports (10 points): Detailed documents describing events in depth and analyzing them in the context of international law. Reports may focus either on a specific country or on a particular topic. In the latter case, some of the reports analyze the behavior of a number of countries in the framework of international conventions.

The Wire/Stories (8 points): Amnesty International’s monthly magazine, sent to subscribers and people involved in AI’s campaigns, featuring articles on events that are considered by Amnesty officials to be the worst cases of human rights violations. The articles are usually accompanied by color photographs and captions. There is also a small section at the end of updates about ongoing events or the resolution of tensions reported in earlier issues, as well as a list of Worldwide Appeals initiated by Amnesty International (these were not included in the sum of documents for each country – only feature articles were counted). In contrast to press releases, for example, which are written and published immediately, the articles featured in The Wire reflect greater investment of resources. Also included in this category, for the purposes of this study, are “stories” which focus on a particular human rights issue with supporting photographs and captions.

Urgent Actions (1 point): According to Amnesty International, their “Urgent Action Network provides an effective and rapid response to urgent situations involving prisoners of conscience, detainees, and other threatened individuals.” This usually takes the form of a letter-writing campaign. The lower point value of this category reflects the focus on the plight of specific individuals rather than on national or regional events. Urgent actions often repeat information previously delivered in other types of documents. Moreover, many of these articles serve as updates to previous publications, or announce the end of campaigns and the resolution of the issue at hand.

The value assigned to each type of document by NGO Monitor is then multiplied by the number of such documents issued by Amnesty International concerning each country during the year. For example, if in 2007, Amnesty International produced 2 Reports (20 points) and 2 Press Releases (12 points) on Country X, then that country would be given a score of 32 points. The numerical result is used for analytical comparison of Amnesty International’s attention to the various countries in the region. A higher rating reflects a greater focus on the country, while a lower rating demonstrates a lower priority level and degree of involvement. While different scales may lead to somewhat different numerical results, they are unlikely to affect the overall conclusions.  (The sources used by NGO Monitor are fully documented and references are available upon request.)