On February 20, 2022, over 100 European and international NGOs, self-proclaimed grassroots movements, and politicized trade unions launched another BDS campaign headlined “#StopTradeWithSettlements” calling “for an EU law that will end trade with illegal settlements once and for all.”1

The activists are using an EU mechanism, “European Citizens’ Initiative” (ECI), which “allows EU citizens to participate directly in the development of EU policies by calling on the European Commission to make a legislative proposal.” According to the Commission, in order to qualify for consideration, “an initiative must gather the support of at least one million EU citizens from at least seven member states” – after which point the Commission “must decide whether or not to make a legislative proposal, and explain the reasons for that choice.” (For more information, read European Citizens’ Initiative – “How it works.”)

Organizers have attempted to frame their campaign as not specifically targeting Israel, after a previous iteration was rejected by the Commission.2  An advocacy officer for The Platform of French NGOs for Palestine (PFP), one of the campaign leaders, and a group devoted entirely to an anti-Israel agenda, asserted that “the initiative had nothing to do with the BDS movement.”

However, such claims are inconsistent with the evidence, to understate the case. The campaign initiators are all BDS activists, including current and former senior officials of intensely anti-Israel NGOs (see below). As noted by Human Rights Watch (HRW), which has been a leader of BDS campaigns and other forms of singling out Israel and double standards, the ECI “applies in a clear-cut fashion to the Israeli-occupied West Bank.” The campaign website mentions only one specific situation, “the Occupied Palestine Territory and Israel’s illegal settlements there”; refers to the “current atrocities such as Israeli settlements in Occupied Palestine”; all the background images used on the website are from the Israeli-Palestinian context; and the associated social media materials all revolve around Israel.  The website originally featured a top menu item on “Illegal Israeli Settlements,” but this section was removed shortly after the initiative was formally launched (before and after). Finally, in December 2021, PFP described the project as a “European Citizens’ Initiative (ECI) concerning the banning of products from Israeli settlements.”

Additionally, the initiative received €10,000 funding from a private company owned by a Palestinian BDS activist who also headed an organization tied to the dominant Fatah group (details below). It is reasonable to assume that each NGO behind the campaign will bear additional costs as part of its role in the campaign; for instance, PFP advertised for a remunerated intern to assist in “the implementation and the execution” of the ECI.3

This initiative is part of long-term campaign by NGOs to induce the EU and other governments to incrementally adopt BDS measures against Israel, such as the 2015 product labeling effort.

Launching an ECI requires “a group of organisers composed of at least 7 EU citizens living in 7 different EU countries.”

Each of the organizers for #StopTradeWithSettlements – per the list on the EU website –is a BDS activist and/or a current or former senior member of anti-Israel NGOs that promote anti-Israel narratives such as discriminatory BDS campaigns, accusations of Israeli apartheid, and opposition to the IHRA working definition of antisemitism. This leaves no doubt that Israel is the actual target of this initiative.

Giovanni Fassina and Tom Moerenhout –  “Programme Director” and “Steering Committee” member, respectively, of European Legal Support Center (ELSC), a Netherlands-based initiative of Palestinian NGO Network (PNGO) and Rights Forum. ELSC claims to defend “individuals and organizations that face false and defamatory accusations of antisemitism and repression because of their support for Palestinian rights and particularly for BDS measures to achieve these rights.”

Ana Sanchez Mera – As of 2018, Mera was a senior BDS activist from Spain and the coordinator of the BDS National Committee (BNC). She was denied entry into Israel in that year due to her BDS leadership.

Martine Kleinberg – Former President (2018) of the Luxembourg-based advocacy NGO “Committee for Fair Peace in the Middle East” – CPJPO, which advocates for “sanctions against the State of Israel as long as it does not respect international law.”

Martin O’Quigley – Former Chairman of the Ireland-Palestine Solidarity Campaign that “support[s] and promote[s] the Palestinian led Boycott, Divestment and Sanctions (BDS),” “opposes the ideology of actually existing Zionism as being a form of racism built on the violent and continued denial of Palestinian rights,” and “fully supports the right of Palestinian refugees and their descendants to return to their homeland.”

The EU lists Joy Hotels Ltd as a sponsor and funder of the initiative, providing €10,000. Joy Hotels Ltd is an Hungarian hotel chain owned by a Palestinian businessman, Mazen Al-Ramahi. Until 2018, he served as the head of the General Union of Palestinian Communities in Europe (GUPCE), an organization reportedly “dominated” by the Fatah framework in the PLO.

On February 10, 2022, ten days before the campaign launch, an Arabic language article on the need to “prevent the entry of goods from settlements built on Palestinian lands,” quoted Al-Ramahi: “My brothers and sisters, after winning in the Court of Justice of the European Union and after negotiations with the European Commission, we are now taking the last step to force the commission to take a decision that would prohibit the entry of goods from the settlements into the European Union.”

In 2018, Al-Ramahi participated with Omar Barghouti in a seminar held in the European Parliament that “called on individual EU member states to recognise the state of Palestine and to impose trade embargos on any products produced by Israeli settlements in the Occupied Territories.” 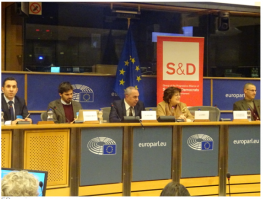 As mentioned above, over one hundred European and international NGOs, politicized trade unions and other groups have announced support for this initiative. This includes Addameer and Al-Haq, two Palestinian NGOs designated by Israel as “terror organizations” because they are part of “a network of organizations” that operates “on behalf” of the PFLP.

Other notable NGO supporters of this initiative include Human Rights Watch and International and Federation for Human Rights (FIDH). HRW, which is based in the US, reported an annual budget of $129 million, and clearly has the resources to contribute substantially to this political campaign advocacy effort. Other participants include European Coordination of Committees and Associations For Palestine (ECCP), Broederlijk Delen (Belgium), Viva Salud, Association Belgo Palestinienne, Association France Palestine Solidarité (AFPS), and Trócaire (Ireland).

Each of these groups has a long record of singling out Israel and double standards used to demonize the nation-state of the Jewish people. In addition, many of these political advocacy organizations receive government funds, including FIDH, Broederlijk Delen, Viva Salud, and Trócaire.