According to DGD, “recognized [Belgian] NGOs” provide funding to local NGOs through “co-financing programmes,” where DGD provides up to 85% of the total grant.

In the context of the Arab-Israeli conflict, many Belgian-funded NGOs promote delegitimization and anti-Israel narratives, including promoting lawfare and BDS (boycott, divestment, and sanctions) campaigns. Some of these groups also have ties to the Popular Front for the Liberation of Palestine (PFLP), designated as a terrorist organization by the EU, US, Canada, and Israel.

On December 19, 2019, the Israel Security Agency (Shabak) announced it had uncovered a 50-person PFLP terror network operating in the West Bank. The Shabak published pictures of weapons and bomb making materials confiscated during these raids.

Among those arrested were individuals allegedly responsible for the August 23, 2019 bombing attack in which 17-year-old Rina Shnerb was murdered, and her father and brother were injured.

The Shabak statement named multiple leading PFLP figures, several of whom currently or previously worked in senior positions for Palestinian NGOs.  Critically, these included NGO accountants and financial directors, responsible for handling grants from foreign governments. Some of these NGOs receive funding from Belgium. For example: 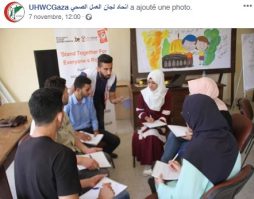 UHWC is identified by Fatah as a PFLP “affiliate” and by a USAID-engaged audit as “the PFLP’s health organization.” HWC is UHWC’s former West Bank and Jerusalem branch.

On June 9, 2015, Israel’s Defense Minister declared that “the group of people or institutions or association known as the ‘Union of Health Work Committees-Jerusalem’…or any other name that this association will be known by, including all of its factions and any branch, center, committee or group of this association is an unauthorized association, as defined by the Defense Regulations” (emphasis added, p.6489). At the time of this declaration, DGD was funding Viva Salud for programs in partnership with UHWC and HWC.2

In 2017-2018, Oxfam reported that DGD provided €288,002 for the project “Protecting Lives in Closed Borders.” The project partners included UAWC. DGD reports that the project had a budget of approximately €1.2 million. In addition, Oxfam Solidarité reports that a DGD-funded program “Cash-for-work” (funding details unknown) was implemented in partnership with UAWC.

UAWC is identified by Fatah as a PFLP “affiliate” and by a USAID-engaged audit as the “the PFLP’s agricultural organization.” According to academic work published by l’Institut français du Proche-Orient, “UAWC is an agricultural NGO linked to the Popular Front for the Liberation of Palestine.”

In 2014-2016, DGD provided Solidarité Socialiste (SolSoc) with €1.1 million for the project “Capacity building of youth for the creation of a social movement that supports equality, freedom, human rights and social, political and economic justice.” During the years of the grant, SolSoc listed three Palestinian NGOs partners including Bisan Center for Research and Development (Bisan).6 Since 2017, SolSoc has not listed Bisan as a partner.

In January 2017, SolSoc interview Itiraf Rimawi, “director of Bisan…[who] has been held in administrative detention for 2 years before beeing freed.”
https://www.facebook.com/watch/?v=1253895367990896

An academic dissertation by scholar Sbeih Sbeih (Université de Versailles Saint-Quentin-en-Yvelines) on Palestinian NGOs indicates that “some [NGOs], because of their link to PFLP, opposed the Oslo Accords. Such was the case of Bisan.”

In 2017-2021, DGD is providing the Belgian NGO Broederlijk Delen (BD) with €1.3 million for “Enhance[ing] Palestinians’ dignity through better access to rights and creating opportunities for personal and community development.” BD lists eight local partners including DCI-P, a PFLP-linked Palestinian NGO that seeks to convince government officials, UN bodies, and the general public that Israel is systematically abusing Palestinian children. In 2017-2019, according to the International Aid Transparency Initiative (IATI) database, BD provided DCI-P with €92,900. In addition, in 2014-2016, the last year BD detailed its funding to NGOs on its annual reports, BD provided DCI-P with €120,000, including €96,000 from DGD.9

Numerous individuals with alleged ties to the PFLP terrorist organization have served as employees and as board members at DCI-P. In June 2018, in light of these PFLP links, Citibank and Arab Bank closed accounts belonging to DCI-P. Global Giving, a US-based crowdfunding resource, also removed DCI-P from its website.