It appears that Bensouda exclusively met and replied upon groups representing the Palestinian narrative, which is reflected in the significant bias in her analysis.

Meetings with Biased Actors and Organizations

Bensouda met with the following representatives from terror-tied and/or delegitmization NGOs. There is no evidence of her office contacting or her personally meeting with any NGOs representing Israeli victims despite several groups filing materials with her office and seeking meetings with her. (See Appendix I for details about NGOs mentioned in this report.) 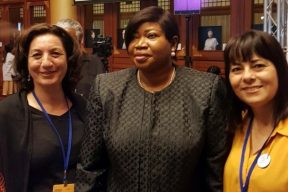 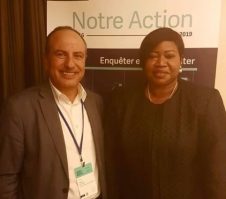 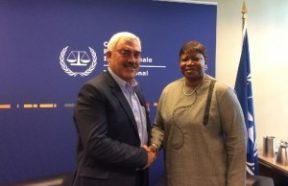 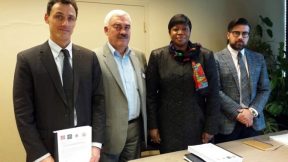 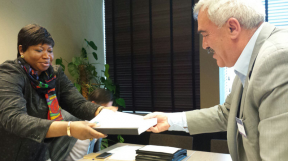 Bensouda also met with a number of government officials from repressive regimes. For example, on September 22, 2017, Bensouda met with Iran’s Foreign Minister Mohammad Zarif at the UN General Assembly regarding “strengthening #MENA-ICC engagement.” 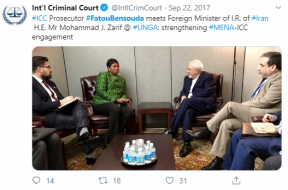 On July 9, 2017, Bensouda traveled to Qatar and met with Qatar’s Foreign Minister Sheikh Mohamed bin Abdurrahman Al-Thani. During the meeting, the two discussed “cooperation between the State of Qatar and the Office of the Prosecutor as well as the raising of awareness about international criminal justice and international humanitarian law.” 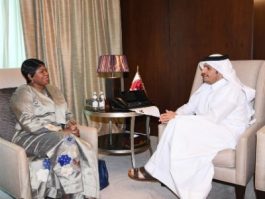 Bensouda has also met with Palestinian officials, including numerous meetings with Foreign Minister Riyad al-Maliki and President Mahmoud Abbas. Although in a January 13, 2020 interview with the Times of Israel, Bensouda states “My office has not met with any individuals identified as representing Hamas or the PFLP,” a December 30, 2019 article in the Jerusalem Post notes that the ICC met with officials from the Hamas and PFLP terror group, including “Ghazi Hammad…one of Hamas’ leaders” and “Khalida Jarrar [] represent[ing] the PFLP.” Jarrar was indicted in November 2019 of heading the PFLP in the West Bank since June 2016.

The ICC has also relied heavily on these NGOs in her various reports and briefs. In a number of instances, these documents uncritically repeats claims contained in non-credible UN reports that originated from these same NGOs.

Additionally, Bensouda’s December 2019 brief to the Court, seeking jurisdiction to open an investigation against Israel, relies almost exclusively on non-legally binding, highly controversial resolutions from the UN General Assembly (UNGA) and the UN Human Rights Council (UNHRC), as well as reports from the Special Committee and the UN CERIPP committee – bodies that disproportionately single out Israel and whose activities clearly meet the IHRA definition of antisemitism. Her filings completely erase the politicized context surrounding these resolutions and reports.

On December 20, 2019, Chief Prosecutor of the International Criminal Court (ICC) Fatou Bensouda announced that she intends to investigate alleged war crimes in the “State of Palestine.” This move is to a significant degree the product of consistent and heavy lobbying of the ICC for over a decade by NGOs.