During the 29th Session of the UN Human Rights Council (UNHRC—June 15- July 3, 2015) one of the central topics of discussion was “the report of the Independent International Commission of Inquiry [COI] on the 2014 Gaza conflict.” The COI’s report was initially headed by William Schabas and then taken over by Mary McGowan Davis after the former’s resignation over his undisclosed paid work for the PLO.

On June 29 the topic was presented to the Council, where a number of highly active political advocacy NGOs submitted oral and written statements, accusing Israel of “intentionally targeting the civilian population,” “war crimes,” “crimes against humanity,” “systematic human rights violations,” and “unlawful policies of impunity.” The statements also called for states to adopt BDS (boycott, divestment, and sanctions) measures against Israel and echoed the “Commissioners’ support of international justice mechanisms such as the International Criminal Court [ICC].” The vast majority of the statements altogether omitted the numerous war crimes committed by Hamas and other Palestinian terror groups against Israeli civilians.

These same groups, which receive extensive funding from European governments, had been highly instrumental in initiating calls for the UN to conduct a “fact-finding” investigation into alleged Israeli war crimes during the conflict. This foreign funding enables them to disseminate baseless and unverifiable allegations.

In fact, a number of the NGOs received “emergency funding” from the Human Rights and International Humanitarian Law Secretariat (joint funding from Sweden Switzerland, Denmark and the Netherlands) for use in documenting “large scale violations of human rights and international humanitarian law – the majority against Palestinian civilians and civilian objects” in Gaza. The purpose of this emergency funding was to support “current and future documentation and investigation efforts by CSOs [civil society organizations] for the purposes of assisting and supporting national and international mechanisms” such as the UNHRC’s investigation and the campaign to open cases against Israelis in the ICC.

These groups do not employ professional fact-finding standards and lack credible research methodology, as well as the necessary legal and military expertise to make such allegations. Yet, these baseless and unverifiable claims are repeatedly cited in UN reports and voiced in the UH Human Rights Council, thereby fueling the international demonization and delegitimization campaign against Israel.

Excerpts from NGO statements to the 29th session of the UNHRC

[BADIL does not publish financial information, reflecting a lack of transparency and accountability. Research reveals that it receives funding from the Human Rights and International Humanitarian Law Secretariat (joint funding from Sweden, Switzerland, Denmark, and the Netherlands). BADIL has also received funding from DanChurch Aid (Denmark) and Trociare (Ireland)].

Medical Aid for Palestinians Oral Statement in the Interactive Dialogue with the Commission of Inquiry on Gaza, United Nations Human Rights Council, June 29, 2015

American Association of Jurists – Human rights situation in Palestine and other occupied Arab territories, Interactive dialogue with the Independent Commission of Inquiry

We recall the COI considerations that this report should be viewed in the context of the “structural issues that fuel the conflict.” Specifically denial of Palestinian self-determination through prolonged occupation, and the fragmentation and annexation of land through the construction of separation walls, settlements, the illegal annexation of East Jerusalem and the 8 years long blockade of Gaza Strip. These illegal policies remain the root causes of the recurring violence. It must be noted the blockade constitutes collective punishment…

A complex web of laws and regulations has created a system designed to ensure impunity for violations committed against Palestinians.

Like the COI we are deeply disturbed “by Israel’s decision to close its criminal investigation into the case of the killing of four children on the beach in Gaza on 16 July 2014.” This case is a blatant example of the pattern of impunity that reigns in Israel for grave violations of international law committed in the OPT.

The time has come for the international accountability mechanisms. We second the Committee’s call for the States to support the work of the ICC.

Our organizations call on all member states to support the commission recommendations that the Council consider conducting a comprehensive review of the implementation of recommendations addressed to the parties, in particular those pertaining to this current commission of inquiry and the fact-finding mission in the aftermath of Cast Lead in 2009.

International Organization for the Elimination of all Forms of Racial Discrimination, Palestinian Children in Israeli Military Detention, June 29, 2015

Statement by the Women’s International League for Peace and Freedom (WILPF) on behalf of the Palestinian Women National Coalition of 1325 on the accountability for human rights violations in Palestine, June 29, 2015

Immediate action needed to guarantee accountability: Israel’s persistent impunity is the root cause to the continuing deterioration of human rights in the OPT, May 25, 2015

Israel’s armed forces and grave violations of children’s rights, May 26, 2015 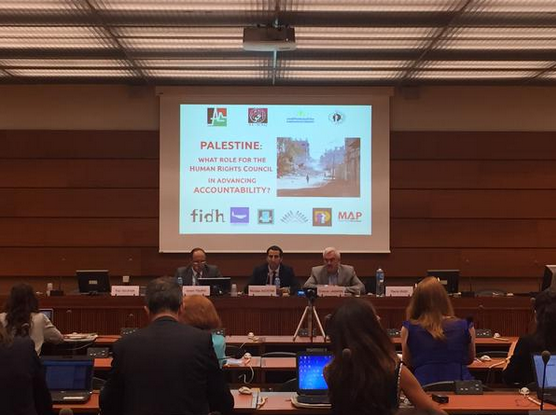