Amnesty International is continuing to lose credibility as a human rights organization. Its London-based staff is staging another strike that the AP describes as “an embarrassing setback for an organization that campaigns for the rights of workers and is considered one of the world’s pre-eminent human rights advocates.”  As NGO Monitor’s Gerald Steinberg told the AP, “They really are in trouble. They’ve been in crisis for a number of years.”

In parallel, Amnesty continues to engage in highly unprofessional anti-Israel advocacy related to the violence from Gaza, falsely blaming Israel alone for “re-igniting the conflict” and calling for an arms embargo against Israel. Amnesty’s statements are consistent with its long-established ideological agenda of pursuing sanctions (BDS) and legal attacks (“lawfare”) against Israel in order to isolate the Jewish state (“Durban strategy”).

Amnesty’s activities during the current fighting also demonstrate a systematic lack of professional ethics. Amnesty “researchers” are not experienced forensic investigators or military experts, and lack access to the information needed to make complex factual and legal determinations. Furthermore, some Amnesty staffers have used their Twitter accounts for unprofessional, anti-Israel and antisemitic comments.

Israel/Gaza: All sides must step back from the brink to protect civilians, November 14, 2012
In the weeks prior to the commencement of Operation Pillar of Defense, when scores of rockets were fired at Israeli civilians, wounding dozens, Amnesty did not issue a single statement in condemnation of Hamas’ targeting of Israeli civilians.

Amnesty only reacted after Israel killed acting Hamas military chief of staff Ahmed Jabari on November 14, 2012. Amnesty issued a statement blaming Israel for the crisis: “Israel’s assassination of Ahmad al-Ja’abari, the head of Hamas’ military wing has placed civilians in Gaza and southern Israel at grave risk by re-igniting the armed conflict there.”

Hamas and other Palestinian terror groups in Gaza are not part of Amnesty’s analysis and are not assigned blame. Only at the end of the press release, in the eighth paragraph, does Amnesty mention violations of Israeli human rights, and then, without referencing rocket fire (each one a war crime, collectively crimes against humanity) before November 10.

Amnesty also claims in this statement it has “gathered evidence that suggests at least two of these [Israeli] attacks, on 8 and 10 November, were indiscriminate and, therefore, in violation of international humanitarian law.” Despite this allegation, Amnesty provides no evidence that Israel engaged in “indiscriminate” responses.  As demonstrated repeatedly in previous conflicts, Amnesty uses no identifiable methodology in making its claims and lacks the necessary information and expertise, including knowledge of Israeli military intelligence and rules of engagement, to make these determinations of international law. It is also noteworthy that Amnesty chose not to “gather evidence” about attacks against Israelis.

Israel/Gaza conflict: UN must impose arms embargo, send international monitors immediately, November 19, 2012
In its second press release on the conflict, Amnesty engaged in a direct assault on Israel’s right to self-defense, calling for the UN Security Council to impose an “international arms embargo on Israel, Hamas, and Palestinian armed groups in Gaza.”

As in past Amnesty statements, this statement has a façade of balance by calling for an embargo on all parties. It equates Hamas, a designated terrorist organization (EU, US, Canada, UK, Australia, and Japan) that engages in war crimes and crimes against humanity with Israel, a sovereign country legally acting to defend its citizens from deliberate attacks on civilians.  It also ignores that vast body of international law relating to the prevention of financing and commission of terrorist acts, such as Security Council Resolution 1373, all arms transfers and other support to Hamas and other groups in Gaza are expressly forbidden.

This is immoral approach makes a mockery of the foundations of universal human rights and international law.  Amnesty’s attempt to equate the transfer of weapons to Israel for legitimate defense with clandestinely smuggled arms to a terrorist organization is defamatory, immoral, and absurd.

Despite this impression of balance in the press release, in practice, Amnesty’s regular campaigning on this issue focuses solely on Israel.  For instance, Amnesty has been active in lobbying and testifying at the UK Parliament to block export licenses to Israel. Meanwhile, Amnesty has done little to no campaigning to prevent weapons smuggling to Gaza from Iran, Syria, China, and Libya.

In fact, Amnesty has done exactly the opposite with relation to Hamas.  It has repeatedly condemned Israel’s naval blockade on Gaza and actively sought its removal, even though the blockade is in place precisely to enforce an arms embargo on Hamas.  The UN Secretary-General’s Panel of Inquiry on the 31 May 2010 Flotilla Incident, chaired by Sir Geoffrey Palmer, found that the “naval blockade was imposed as a legitimate security measure in order to prevent weapons from entering Gaza by sea and its implementation complied with the requirements of international law.”

Despite claims to conduct “fact based” research, Amnesty “researchers” are not professional forensic investigators bound by industry guidelines and standards. They are not military experts, privy to targeting and battle information. Amnesty does not reveal its research methodology (if any), nor does it provide any information regarding a chain of custody for the “evidence” it possesses.  Moreover, some of the rhetoric disseminated on the Twitter accounts of Amnesty staff is not in keeping with ethical and professional standards for human rights researchers.

One example of this lack of professionalism is Kristyan Benedict, a staff blogger at Amnesty-UK and Middle East campaign manager. He has used his Twitter account for anti-Israel rants and antisemitic jokes, including a November 20 tweet, 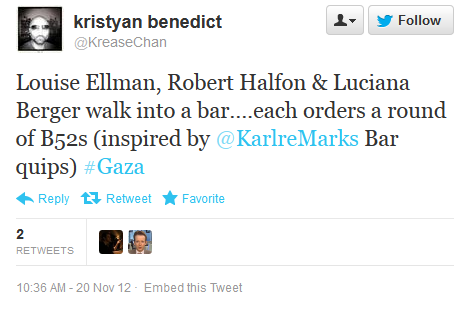 The three people he appears to characterize as warmongers are British Members of Parliament, all of whom are Jewish.  This tweet prompted an inquiry by John Mann MP, chair of the UK All-Party Parliamentary Group against Antisemitism, to Amnesty seeking clarification on the organization’s policies towards preventing antisemitism. It appears that the organization has initiated disciplinary action.According to news reports issued on November 21,

Amnesty statements on the conflict

November 15, 2012 kristyan benedict @KreaseChan
How soon before Israel brings out the flechettes & white phosphorus given that “All options are on the table”?#Gaza#IndiscriminateAttacks

November 15, 2012 Razan Ghazzawi @RedRazan
Israel continues to “defend” its apartheid state by bombing families in#Gaza. Palestinians will not sit back and receive your death wishes.
Retweeted by kristyan benedict

November 19, 2012  kristyan benedict @KreaseChan
True RT @AliAbunimah: One consequence of Israel’s murder campaign in Gaza will undoubtedly be that more people will come to support #BDS

November 19, 2012 kristyan benedict @KreaseChan
Cha.. this Gilad Sharon thing is taking off..so I have to read it..should be working on #Syria..Israel/Palestine work is like an addiction

November 16, 2012 Sunjeev Bery @SunjeevBery.@ammanalquds I agree that #Israel is the occupier in #Gaza. But targeting civilians is always wrong. And that includes the blockade.