Established in 1993 in cooperation with the PFLP-affiliated Addameer, Al-Dameer is a Gaza-based non-governmental organization (NGO) that claims to work on “development, upholding, protecting, publicizing and strengthening human rights in Palestinian society in the Gaza Strip, strengthening the importance of Palestinian civil rights, including the rights of detainees and children and the right of freedom of association…” Al-Dameer is a member of the Palestinian NGO Network (PNGO).  As detailed below, it has received significant funding from the European Commission and has also received government funds from countries such as Switzerland and the US.

Since NGO Monitor published its previous report in January 2020, Al-Dameer has introduced new executives and members of its Board of Directors. As detailed below, many of these individuals have links to the Popular Front for the Liberation of Palestine (PFLP), a designated terrorist organization by the US, EU, Canada, and Israel. In addition, the NGO itself has partnered with other PFLP members. For example, according to the website of a program under the title of “Contributing to the respect, protection and promotion of the right to association in the Gaza Strip”, on December 30, 2019, Al-Dameer held a conference on “The reality of the right to association in accordance with international obligations of Palestine”; among the participants was Mariam Abu Daqqa, a member of the PFLP Central Committee.

Multiple staff members of Al-Dameer are also members of the Democratic Association of Lawyers and Jurists (DALJ); some hold high-ranking positions. According to the PFLP, DALJ is the “Front’s [lawyers’] union framework,” a PFLP subsidiary that regularly collaborates with the PFLP and participates in the latter’s rallies, celebrations and official meetings. Furthermore, DALJ regularly praises PFLP members and disseminates its official content.

Details regarding the affiliation of several Al-Dameer members with DALJ include:

Alaa Skafi is the Acting Executive Director of Al-Dameer as of April 2020. Skafi also held the position of Deputy Director during 2019 and Legal Unit Coordinator in April 2019–January 2020, according to Arab media sources and Al-Dameer.3 According to Al-Dameer, Skafi has been working at the NGO since 2018.

Previously, Skafi was a lawyer at Al-Mezan, another NGO with ties to the PFLP, from March 2011 to November 2018. (For more information on Al-Mezan’s PFLP ties, read NGO Monitor’s report “Al Mezan Center For Human Rights’ Ties to the PFLP Terror Group.”) 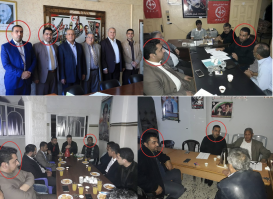 Alaa Skafi, accompanied by Al-Dameer staff members Yousef Balousha and Fathi Al-Helou, participating in a PFLP march “to support the prisoners and against Trump’s visit to the Palestinian territories.” 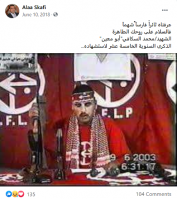 Alaa Skafi posted a picture of Muhammed Skafi and wrote, “We knew him as a gallant revolutionary knight, may your pure soul rest in peace, the martyr Muhammed Skafi, ‘Abu Mu’in’…” 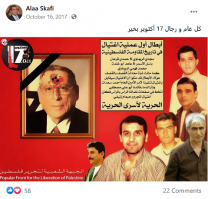 Skafi’s poster hailing PFLP members involved in the assassination of the late Israeli Minister of Tourism, Rehavam Ze’evi. Skafi wrote in his post, “May the men of October 17 be well every year.”

Maher Al-Attar held the position of Chairman of Al-Dameer’s Board as of August 20205 and Head of the PFLP’s DALJ as of February 2019.6 Al-Attar was a member of the Union of Health Work Committee (UHWC)’s Board as of July 2019.7

(UHWC is identified by Fatah as an official PFLP “affiliate” and by a 1993 USAID-engaged audit as the “the PFLP’s health organization.” For more information on UHWC’s PFLP ties, read NGO Monitor’s report “Union of Health Work Committees’ Ties to the PFLP Terror Group.”) 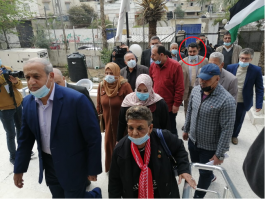 Ilham Jarghoun is Al-Dameer Vice Chairman of the Board since December 2019.8

Mousa Ayyad is the Secretary of Al-Dameer’s Board as of August 20209, and the Head of the PFLP’s Progressive Scouts Groups as of June 2015.10 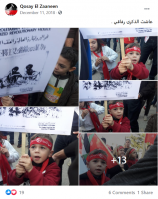 Al-Zaaneen’s pictures from the PFLP event, and his post: “Long live the anniversary my comrades.”

Al-Zaaneen’s PFLP poster referring to him as a “comrade.” 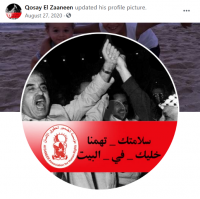 Al-Hour’s pictures from an official PFLP rally, and post: “…All salutations and appreciation to all who participated in commemorating the anniversary of the glorious start. 52 years of sacrifice and maintaining the principles.” 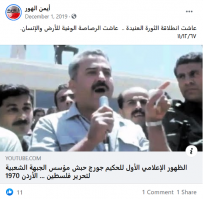 Al-Hour shared a YouTube link of a PFLP rally with George Habash and wrote, “Long live the launch of the stubborn revolution. Long live the bullet that is faithful to the land and people.11/12/67.”

Many of Al-Dameer's current and former officials, employees, and board members have links to the Popular Front for the Liberation of Palestine (PFLP), a designated terrorist organization by the US, EU, Canada, and Israel.