On May 30, 2017, DanChurchAid (DCA) posted a response to criticism against its partnerships with organizations and individuals with alleged ties to terrorism and that promote antisemitism.

According to DanChurchAid, “The critisism [sic] is mainly directed towards Shawan Jabarin,” General Director of Palestinian NGO Al-Haq and General Secretary of International Federation for Human Rights (FIDH, based in France).

DCA acknowledges that “Jabrin was in prison for 9 months back in the 1980’s accused of helping two members of the organisation PFLP to travel for a training.” The group further claims that “Jabrin denies any involvement with PFLP and states that he has had no contact with them since his imprisonment.” (The Popular Front for the Liberation of Palestine [PFLP] is a terrorist organization designated as such by the US, EU, Canada, and Israel. The PFLP is involved in suicide bombings, hijackings, and assassinations, among other terrorist activities targeting civilians.)

DCA, however, does not relate to all the readily available facts. According to an Israeli statement to the UN, Jabarin’s connections to the terror organization continued beyond his conviction in 1985. DCA further omits the following evidence connecting Jabarin to the terror group:

DCA also defends its annual funding to the Palestinian NGO Badil (DKK 300,000) and attempts to deflect allegations of antisemitism associated with this funding by claiming that “The ammunition for this has chiefly been two drawings. One from 2010 and another from 2015.”

According to DCA, “the one from 2015 – was just submitted for a competition and as such is not a Badil product and was not published by Badil.”

However, the 2015 drawing in question, which depicts a fist punching through the entire State of Israel, was indeed published by Badil: 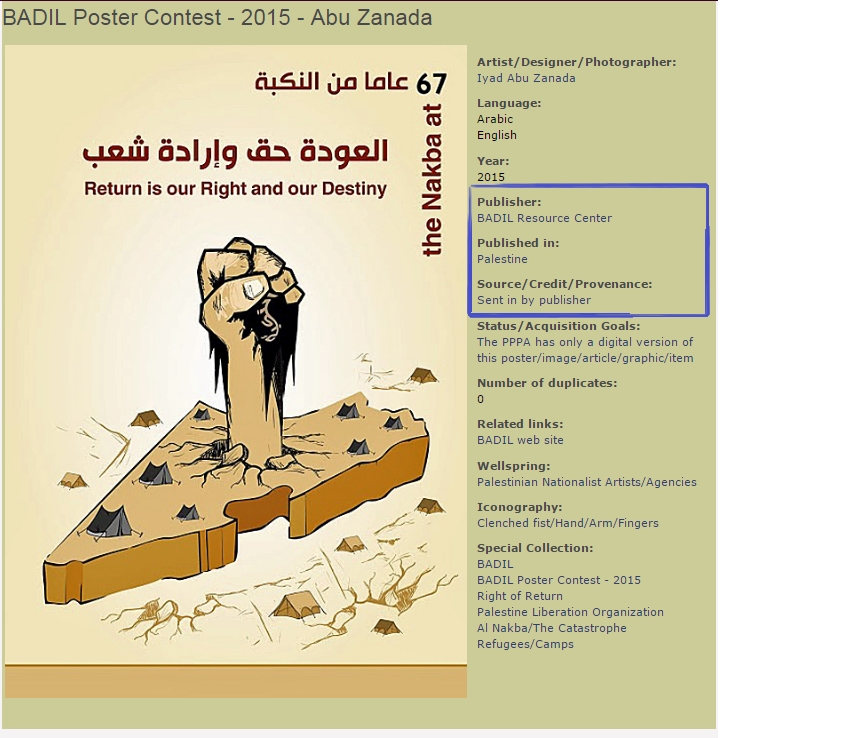 Furthermore, Badil’s website currently displays numerous similar images depicting the elimination of Israel. This includes a 2016 poster that contains the Badil emblem. In addition to its graphic publications, Badil maintains a narrative of Israel as a “settler colonial and racist state.”

Regarding the 2010 image, DCA agreed “that this caricature is anti-Semitic.” This acknowledgement only came following correspondence with NGO Monitor during which DCA requested that NGO Monitor provide them with the “…definition of anti-Semitism used by NGO Monitor to reach your very serious conclusions” and “the specific interpretation and analyses of the alleged anti-Semitic language of the several posters you say you have identified as being anti-Semitic.”

DCA’s defensive and misleading response to criticism reflects a lack of due diligence in its funding of and partnerships with NGOs. In both cases, DCA proceeds based on the self-reporting of its NGO partners, and ignores the plethora of publicly available information that contradicts their claims.

Given the evidence, DCA ought to conduct real investigations into the activities and rhetoric of its grantees and partners. As a recipient of over €11 million in funding from the European Union, a good place to start would be the International Holocaust Remembrance Alliance working definition of antisemitism, adopted by the European Parliament on June 1, 2017: “antisemitism manifests itself with regard to the State of Israel taking into account the overall context could include: denying the Jewish people their right to self-determination, e.g., by claiming that the existence of a State of Israel is a racist endeavor” (emphases added).