Similar to previous years (see NGO Monitor reports for 2014, 2013, 2012), many politicized NGOs and well-known charities have been exploiting the 2015 Christmas season with anti-peace campaigns, some of which glorify terrorism.

Groups such as Sabeel (funded by Sweden, via Diakonia, and the Netherlands via ICCO and Kerk in Actie), War on Want (funded by UK, EU, and Ireland), Adalah-NY, Kairos Palestine, and Amos Trust are again using religious and holiday themes to demonize Israel. These organizations utilize inflammatory and offensive rhetoric in their Christmas carols, holiday messages, appeals, and religious imagery.

At the same time, their messages strip the context, omitting references to deadly Palestinian terrorism and other violence against Israelis. They fail to condemn the escalation of attacks against civilians in the last quarter of 2015 – stabbings, car rammings, and drive-by shootings. For example, many of these so-called Christmas messages allege that the security barrier causes harm to Palestinians, while failing to mention its role in protecting civilians against terror attacks.

The abuse of Christmas messages is part of a broad international campaign of political warfare conducted against Israel in some churches. Palestinian Christian NGOs, such as Sabeel and Kairos Palestine, provide the theological and ideological frameworks for these attacks.

Despite claiming to promote moral agendas with messages of peace, these NGOs and charities actually abuse this holiday and religious symbols.  Their intolerant and theologically charged messages aggravate an already polarized and violent conflict.

The Politicized anti-Israel NGOs exploiting the message of Christmas

Al Quds University, which has received funding from the EU’s Partnerships for Peace program, displayed a “martyrs tree.” The tree’s decorations included pictures of terrorists who had conducted attacks against Israeli civilians over the previous few months.  The tree was revealed in an event attended by the University’s President and the Mufti of Bethlehem. 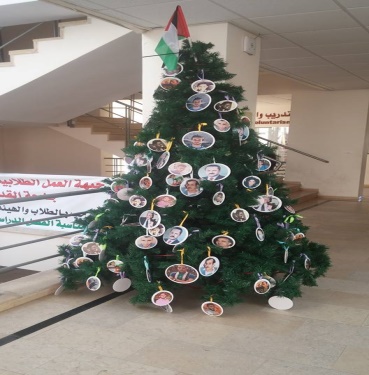 Kairos Palestine is an NGO that promotes the 2009 Kairos Palestine document, drafted by a small group of Palestinian Christian clergy. It calls for BDS (boycotts, divestment, and sanctions) against Israel and denies the Jewish religious and historical connection to any part of the Land of Israel. The Kairos Palestine document also ignores more than fifty years of Jewish-Christian reconciliation and repeats ancient antisemitic themes, including the dogma that Judaism was superseded by Jesus and Christianity (“replacement theology”).

Additionally, on the first day of Advent, Kairos Palestine released a statement marking the UN International Day of Solidarity with the Palestinian People.  The statement blames the victim by putting the onus for terrorism against Israeli civilians on Israel itself:

Sabeel claims to be an “ecumenical grassroots liberation theology movement among Palestinian Christians,” which “encourages Christians from around the world to work for justice and to stand in solidarity with the Palestinian people.” Sabeel is active in anti-Israel political campaigns, including church divestment campaigns, and supports a “one state” formula, meaning the elimination of Israel as a Jewish state.

As in previous years, Naim Ateek uses Sabeel’s 2015 annual Christmas message as a vehicle for demonization of Israel:

UK-based Amos Trust advertises an annual Bethlehem Pack, which contains the following theological references to promote advocacy against Israel, including indoctrinating Sunday school children with a theologically motivated political message.  Much of the text, including the examples below, is the same as in years past:

Wi’am is involved in BDS, supports the Kairos Palestine document, and often distorts the context of terror.  This year Wi’am released a Christmas Smile Proposal, under the headline “WE WILL NOT ALLOW THE GRINCH TO STEAL CHRISTMAS,” to raise money to fund a Christmas event.  The proposal claims that:

HCEF is an ecumenical group of American Christians. It promotes the Kairos Palestine document, and applies a Palestinian liberation theology that fuses Christian theological antisemitism with Palestinian nationalist ideology.

In the picture, children are holding a picture which says “Allow the little children, and don’t forbid them to come to me.”

PAX Christi, established in Europe in 1945 as a “global Catholic peace movement,” promotes the Palestinian narrative of the “Nakba” [catastrophe] and urges the international community “to hold Israel accountable for its statist crimes of oppression and collective punishment.” 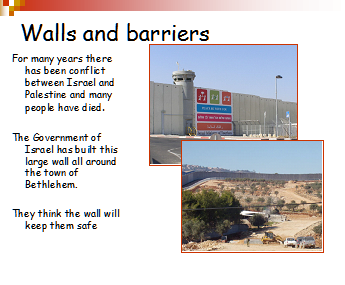 Embrace the Middle East runs schools, and organizes programming and other community development initiatives. It also promotes an entirely biased and distorted view of the conflict based solely on the Palestinian narrative of victimization and Israeli aggression.

AFSC actively promotes BDS campaigns against Israel; accuses Israel of “apartheid against Palestinians”; and advocates for the “right of return,” meaning the end of Israel as the nation state of the Jewish people.

NGOs Use Christmas to Glorify Terrorism

At the height of the holiday season, NGOs, well-known charities, and church groups are once again exploiting Christmas to conduct political warfare against Israel.

Yitzhak Santis asserts that the political warfare attacks against Israel this Christmas season were made possible by extensive governmental funding of highly politicized NGOs.

NGOs (non-government organizations) and well-known charities are exploiting the 2013 Christmas season with political warfare against Israel.

Groups such as Christian Aid (UK), Kairos Palestine, Sabeel, War on Want (UK), Amos Trust, and Adalah-NY are once again using theological themes to advance immoral anti-Israel campaigns and, in some cases, antisemitism.