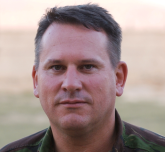 Richard Kemp CBE (Commander of the Order of the British Empire) served in the Army for 29 years. During his final period of military duty, he was head of the international terrorism and Iraq team for the Joint Intelligence Committee from 2002-2006, and was also Chairman of the COBRA Intelligence Group. In both of these roles he handled all major global terrorist attacks, including those against British interests. He was made CBE for his work on the July 2005 London bombings.

Based in Kabul, he was Commander of British forces in Afghanistan in 2003. He fought in the first Gulf War in 1991 and spent much time in Baghdad, Mosul and Fallujah with US forces and the CIA in 2004-05. He commanded an armoured infantry company with the United Nations Protection Force in Bosnia in 1994, and was awarded the Queen’s Commendation for Bravery. He was counter-terrorism adviser to the government of Macedonia in 2001-2002. He commanded his battalion in Londonderry from 1998-2000, the last of his eight tours of duty in Northern Ireland. He was made MBE (Member of the Order of the British Empire) for intelligence work in the province.

Col. Richard Kemp on NGO Monitor: “The work of NGO Monitor is a cause I believe is vital to securing universal human rights. The Middle East is a hotbed for NGOs that pursue their own political ideologies, and we’ve seen the detrimental impact of NGO false claims and misinformation in the universal arena. By increasing the transparency of their operations and sources of funding, we can begin to eliminate many of the false allegations in some of their reports.”