On March 25, 2022, the Palestinian NGO Al-Haq, brought a PFLP-affiliated individual to appear before the UN Human Rights Council (HRC). Al-Haq was designated as a terror organization by the Israeli Ministry of Defense on October 26, 2021, which identified it as a   part of “a network of organizations” operating “on behalf of the ‘Popular Front’,”).

Al-Haq presented an oral statement under the HRC’s Agenda Item 4 on human rights situations, “highlighting the ongoing and increasing suppression of Palestinian resistance in Beita village…” According to Al-Haq, the statement “was delivered by Mr. Said Hamayel, father of Mohammad Hamayel, 16, who was killed by the Israeli occupying forces on 11 June 2021 in the context of a peaceful protest against settlement expansion,” near the West Bank village of Beita.

During his statement, Hamayel claimed that “My family’s struggle with the Israeli occupation started when I was two years old. They killed my father, my brother and my sister…I was arrested and wounded [by the Israeli occupying authorities].”

Undisclosed to the HRC, the PFLP embraced both Mohammad and Said in a statement following Mohammad’s death, labelling them both “comrade[s]” in the internationally designated terrorist organization and producing an official mourning poster to honor Mohammad.1 The PFLP also noted that Said had been previously arrested.

Additionally, the Al-Haq statement downplays the violent nature of the clashes during which Mohammad was shot.

Beita has repeatedly been the site of riots during which Palestinians have lobbed explosive devices, hurled stones, burned tires, and shoot fireworks at Israeli forces, including during the clashes in which Mohammed Hamayel took part.

Notably, In an interview with Al-Jazeera, Said Hamayel said that, “Mohammed was raised in a family, I do not want to say much on it, but everyone knows that it is a family of martyrs, fighting and loyalty – this naturally had a strong impression on his behavior, personality, loyalty…I am so happy that my son was martyred, even if sometimes I seem sad, I am not saddened by his martyrdom…his martyrdom is a source of pride for us…” 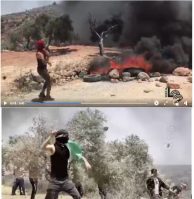 Rioters throwing stones with a slingshot at Israeli soldiers during the Beita riots on June 11,2021, as reported by Wafa and Anadolu Agency

The PFLP official poster mourning: “The martyr hero…Mohammed Saed Hamayel, who went up to the heavens while protecting Palestine and defending mount Sabih