The latest example of Amnesty International’s anti-Israel activity occurred during the weeks of March 6 and March 27, 2017 in South Africa, when Amnesty’s campus clubs took part in “Israel Apartheid Week” (IAW).

Annually, events take place on campuses around the world under the banner of IAW, in order to “raise awareness of Israel’s settler colonial project and apartheid system over the Palestinian people and to build support for the growing Boycott, Divestment and Sanctions (BDS) movement.”

In other words, seeking to delegitimize the State of Israel by spreading false information through emotive posters erected in the center of academic institutions. 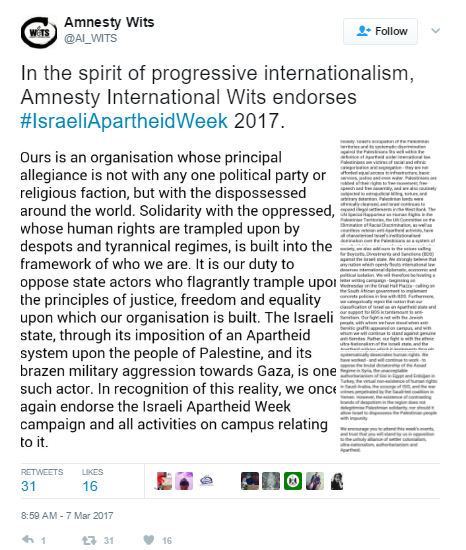 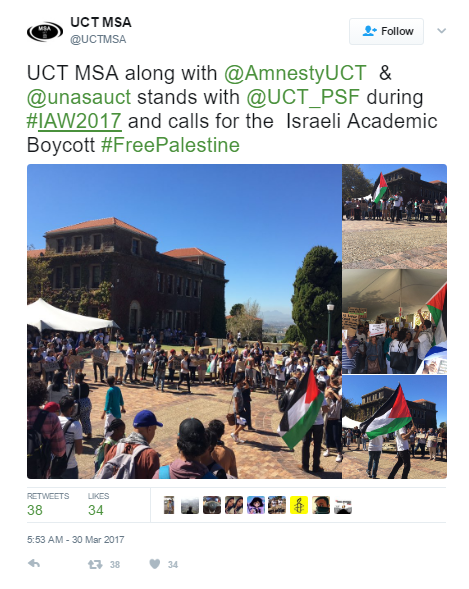 During a joint statement by Amnesty International UCT and United Nations Association of South Africa UCT, an Amnesty activist stated that she was there to “call out the white, oppressive, racist state that is Israel” and that “we are here to dismantle any form of the white supremacist state.”

Additionally, Amnesty UCT was tagged in a tweet by UCT MSA (University of Cape Down Muslim Students’ Association) that stated, “UCT MSA along with @AmnestyUCT & @unasauct stands with @UCT_PSF during #ISAW2017 and calls for the Israeli Academic Boycott #FreePalestine.” 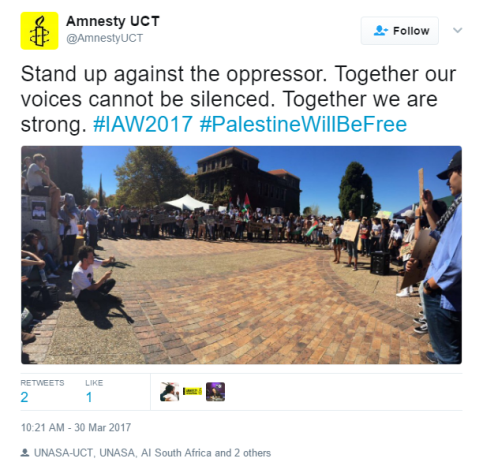 If Amnesty International was an earnest, universal human rights organization, it would avoid events that demonize Israel and erase the Jewish right to equal self-determination. It certainly would not participate in hate campaigns involving “die-ins,” Hezbollah and Hamas flags, Nazi salutes and goose-stepping, and antagonism of Jewish students.