On December 10, NGO Monitor will hold our annual conference, “Terror Leaders as Human Rights Activists – Exposing the Façade”. The virtual conference will focus on ties between NGOs and terrorist organizations, our research exposing the groups currently receiving taxpayer support, and and the impact of this funding. 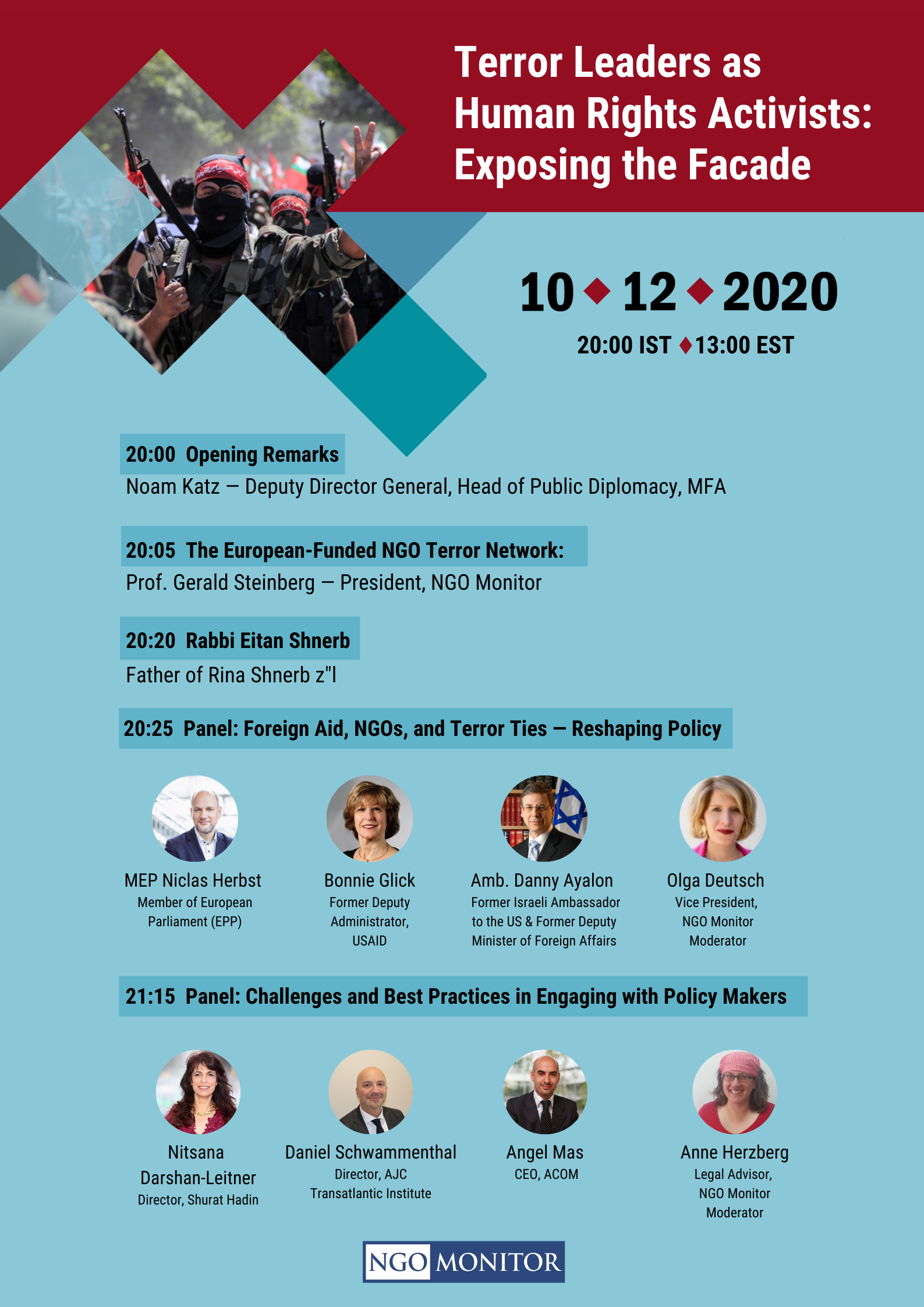 Amb. Noam Katz was born in Jerusalem, Israel in 1964 and currently serves as the Minister of Public Diplomacy at the Embassy of Israel in Washington, D.C. Prior to his current position, Mr. Katz served as Director of the Public Affairs Department for the MFA from 2007-2009. From 2002 to 2007, Mr. Katz was the Ambassador of Israel to Nigeria, Ghana, and the Economic Community of West African States (ECOWAS). Under his leadership, his Embassy won the MFA’s “Outstanding Embassy” award in 2005.  Mr. Katz is married to Einat Katz and is the father of three children.

Bonnie Glick is a Senior Advisor to the Center for Strategic and International Studies in Washington, DC.  In January 2019, she was unanimously confirmed by the Senate to serve as the Deputy Administrator and Chief Operating Officer of the US Agency for International Development from January 2019-November 2020. One of Glick’s duties at USAID was serving as the Senior Agency Vetting Officer to ensure that US Government funds were not inadvertently transferred to organizations that support terror.  At CSIS, Bonnie will continue to focus on important issues she championed while at USAID including 5G, digital transformations, the Abraham Accords, and the COVID-19 response worldwide.

Amb. Danny Ayalon is the President of Hod Ayalon LTD, a private consulting firm for governments and international corporations, and the Chairman of Silver Road Capital, an investment banking firm for business owners and companies. From 2009 until 2013, he served as Israel’s Deputy Foreign Minister and as a Member of Knesset. From 2002 until 2006, Ayalon served as the Ambassador of Israel to the United States. Prior to his ambassadorship, he worked for half a decade in the Israeli Prime Minister&#39;s Office as the senior foreign policy advisor to Prime Ministers Benjamin Netanyahu, Ehud Barak, and Ariel Sharon.

MEP Niclas Herbst is a German politician of the Christian Democratic Union (CDU) who has been serving as a Member of the European Parliament since 2019. From 2017 until 2019, Herbst served as advisor to Minister-President Daniel Günther. He has since been serving on the Committee on Budgets and the Committee on Fisheries. In addition to his committee assignments, he is part of the Parliament’s delegation to the ACP–EU Joint Parliamentary Assembly and the European Parliament Intergroup on Seas, Rivers, Islands and Coastal Areas.

Rabbi Eitan Shnerb has spent over two decades as an educator. He today manages an institute of advanced religious study in Lod and lectures in the local high school. A father of 13, Rabbi Shnerb was among the founders of a group which sought to provide social and religious programming for an underdeveloped area of Lod. Rabbi Shnerb and his son were injured in the attack that took the life of his 17 y/o daughter Rina in August 2019.

Nitsana Darshan-Leitner, Israeli activist and attorney has been leading the legal fight against Israel’s enemies in the courts worldwide. She and her colleagues pioneered the strategy of combating terror financing, the anti-Israel boycott campaigns (BDS) and the multitude of lawfare threats against the Jewish State by its enemies using civil lawsuits. As the president of the Tel-Aviv based civil rights organization, Shurat HaDin–Israel Law Center, she has represented hundreds of terror victims in legal actions against terror organizations and their supporters, and has won hundreds of millions of dollars in compensation on their behalf.

Daniel Schwammenthal is the Director of the AJC Transatlantic Institute and the Secretary General of the Transatlantic Friends of Israel (TFI) group. Before joining the AJC Transatlantic Institute, Mr. Schwammenthal worked for seven years as an editorial page writer and op-ed editor for The Wall Street Journal Europe  Europe in Brussels and Amsterdam, writing about EU politics and economics, the Arab-Israeli conflict, Iran, radical Islam and terrorism. Prior to that, Mr. Schwammenthal worked for six years as a reporter for Dow Jones Newswires in Bonn, Berlin and Brussels covering German and European politics, economics and regulatory affairs.

Angel Mas is President of ACOM, the main pro Israel advocacy group in Spain. With a group of activists, over the last ten years, he has created a highly influential political action team that has become instrumental in the fight against antisemitism and the defence of Israel’s political interests in a relatively hostile environment. In addition to its public diplomacy political work, ACOM is the reference voice of the pro-Israel Spanish civil society in traditional and social media.

Prof. Gerald Steinberg is founder and president of NGO Monitor and professor emeritus at Bar Ilan University. His current research focuses on the politics of human rights, soft power, and non-governmental organizations (NGOs). His book, Menachem Begin and the Israel-Egypt Peace Process: Between Ideology and Political Realism, was published in 2019.

Olga Deutsch is the Vice President at NGO Monitor. She is an expert on EU funding to politicized NGOs, German funding to politicized NGOs, and BDS in Europe through the lens of NGOs. Before making Aliyah in 2009, she served as the chairperson of the European Union of Jewish Students, an umbrella organization for 34 national unions. She is fluent in English, Hebrew, Serbian, and German.

Anne Herzberg is the Legal Advisor at NGO Monitor. She is the author of NGO Monitor’s “NGO Lawfare: Exploitation of Courts in the Arab-Israeli Conflict” and the “International Law, Human Rights and NGOs Series,” as well as co-author of Best Practices for Human Rights and Humanitarian NGO Fact-Finding and other academic publications. She is one of the leading experts on NGO “lawfare” cases against Israeli officials and companies doing business with Israel. She is regularly invited to speak at international conferences, and her op-eds have appeared in Ha’aretz, The Wall Street Journal, and the Jerusalem Post.