On December 4, 2011, more than 350 people packed the Menachem Begin Heritage Center for the official launch of The Goldstone Report “Reconsidered” – A Critical Analysis, a comprehensive volume on international law and the principles of universal human rights. 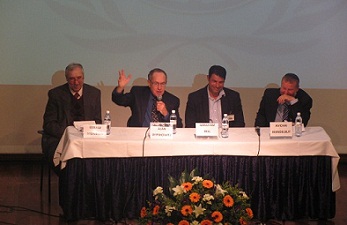 Herzel Makov, head of the Begin Heritage Center, opened the evening by welcoming the crowd and introducing Anne Herzberg, legal advisor of NGO Monitor. Herzberg discussed the timeliness of Reconsidered, explaining how the book, published jointly with the Jerusalem Center for Public Affairs (JCPA), will further the important conversation about the power of non-governmental organizations (NGOs) in exploiting the language of international law and human rights to achieve political objectives. As the Israeli public and Knesset officials engage in heated and healthy debates about NGO funding sources and influence, the UN’s Goldstone Report remains the quintessential example of the negative impact of the powerful NGO-UN-academic network.

An excerpt from the evening (with thanks to Batya Medad)

In particular, Prof. Dershowitz, a member of NGO Monitor’s international advisory board, commented that in Israel, there is no such thing as a “domestic issue.” Israel’s internal debates and military actions almost always become international news, with figures throughout the world opining on Israel’s affairs. He praised NGO Monitor for its work in disclosing the funding sources and agendas behind NGOs that often provide misinformation on these issues and participate in the delegitimization campaigns against Israel.

Maj. Gen. Mandelblitt noted that Israel’s enemies are in the advantageous position of having to meet no expectations regarding international law. While Israel – both by its own standards and the world’s – is bound by the rule of law, terrorist organizations seek to exploit these rules. This is the new era of modern warfare, and it is the basis of asymmetric war, a very dangerous front. He emphasized the need to prepare for the “next wars” in multiple arenas – political, legal, and on the ground.

Prof. Bell emphasized the legal discrepancies of the report, including the shoddy application of internationally-accepted legal standards. He underscored the biases of members of the Goldstone commission. In particular, he cited their public statements against Israel which would have rendered them unfit to serve as a judge in typical judicial proceedings. As Professor Bell pointed out, though the Goldstone commission was never meant to be a legal body, the report continues to be used as a platform to bring legal actions against Israel.

Following the panel, Herzl Makov and Moshe Nissim, chairman of the Begin Prize Committee, presented Prof. Dershowitz with The Begin Award of Honor. Prof. Dershowitz expressed his great appreciated, and remarked that Menachem Begin was a nuanced individual who would appreciate the healthy discourse in which Israelis are engaged.

The Goldstone Mission – Tainted to the Core
Irwin Cotler, Canadian Member of Parliament

The U.N.’s Book of Judges
Ed Morgan, University of Toronto

Report of an Expert Meeting which Assessed Procedural Criticisms made of the U.N. Fact-finding Mission on the Gaza Conflict (The Goldstone Report)
Chatham House

The Case Against the Goldstone Report – A Study in Evidentiary Bias
Alan Dershowitz, Harvard University

The Application of IHL in the Goldstone Report: A Critical Commentary
Laurie Blank, Emory University

A Critique of the Goldstone Report and its Treatment of International Humanitarian Law
Avi Bell, Bar Ilan University/University of San Diego