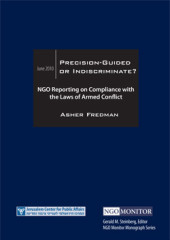 International human rights NGOs are playing an increasingly influential role in shaping the policies of states and international institutions. Decision-makers, media and the public frequently turn to NGOs such as Amnesty International and Human Rights Watch for perspective on international events. Yet despite the growing importance of these NGOs, few scholars have subjected the content of their reports to critical scrutiny.

This monograph analyzes the output of two of the most powerful NGOs, Amnesty International and Human Rights Watch, regarding the 2008-2009 conflict in Gaza and southern Israel. Their factual and legal claims, particularly relating to Israel’s use of White Phosphorus and UAVs, are considered in light of military sources, state doctrine, and the academic literature.

The analysis demonstrates that many of the factual claims made by the NGOs are contradicted by military sources, weapons experts, and media reports. From the legal perspective it is shown that their presentation of key aspects of international law is inaccurate or incomplete. This suggests that these NGOs should carefully evaluate their areas of competency, and take steps to ensure that ideological biases do not affect their work. Policy- and opinion-makers should carefully examine NGO reports before allowing them to influence their positions.

PDF of the full report

Human Rights NGOs And The Laws Of Armed Conflict

AI And HRW’s Claims Of Israeli LOAC Violations: The Framework

International human rights NGOs play an increasingly influential role in shaping the policies of states and international institutions. Directly through consultations and lobbying and indirectly through public advocacy and media campaigns, NGOs publicize their analyses and promote their policy recommendations. One area in which NGOs such as Amnesty International (AI) and Human Rights Watch (HRW) have been particularly active is in evaluating compliance with the Laws of Armed Conflict (LOAC) by parties to hostilities.

While scholars have dedicated attention to questions of NGO formation, activity, and impact on the international system (see Keck and Sikkink, 1998; Welch, 2001; Mathews, 1997), there has been relatively little critical evaluation of the factual and legal claims in NGO reports. It appears that the positive values associated with the promotion of human rights tend to engender positive and uncritical treatment of the NGOs’ substantive claims. This monograph aims to take a first step toward adding a critical perspective.

The case selected for analysis is NGO reporting regarding the 2008-2009 conflict in Gaza and Southern Israel. Few other conflicts have generated as much NGO activity or public interest relating to LOAC. The study focuses on the information disseminated by two of the largest and most influential human rights NGOs, Amnesty International and Human Rights Watch. Their claims and conclusions are considered in light of the academic literature on LOAC, military sources, and state declarations and practice.

It is shown that the NGOs’ [1] descriptions of the means and methods of warfare contain numerous unwarranted assertions and unsubstantiated claims. In other cases, the NGOs present unrealistic depictions of the nature of modern combat, leading them to problematic evaluations of Israeli actions. It appears that these result at least in part from a lack of expertise in relevant areas.

From the legal perspective, it will be argued that the NGOs’ presentation of several key LOAC principles is inaccurate or incomplete. In other instances, AI and HRW present controversial interpretations of LOAC treaties as widely accepted customary law. This suggests that the NGOs may be engaged in “standard setting” [2] rather than in objective evaluations.

Following the introduction, Section 2 discusses the growing role of NGOs in shaping the policies of more powerful actors such as states and international institutions. Section 3 presents the framework for an analysis of AI and HRW’s claims regarding Israel’s LOAC compliance.

Sections 4 and 5 present two case studies of NGO reporting. Each focuses on a topic that drew significant attention during and following the Gaza fighting: Israel’s use of white phosphorus (WP) munitions and its use of unmanned aerial vehicles (UAVs). In each case, LOAC concepts and standards necessary for evaluating Israel’s actions are explored, and the NGOs’ claims and arguments are analyzed.

Among the findings are that:

Section 5 examines the primary NGO arguments regarding Israel’s use of UAVs: That Israel a) failed to take feasible steps to verify the status and nature of intended targets; and b) failed to distinguish between military and civilian persons and objects, or intentionally targeted civilians.

Among the findings are that:

The findings of this study indicate that at least in their reporting on the Israeli-Palestinian conflict, AI and HRW’s reports contain many factual inaccuracies and problematic presentations of international law. It is therefore suggested that AI and HRW, as well as other NGOs dealing with similar issues, carefully evaluate their areas of competency, and ensure that factual and legal assertions are made with the proper degree of expertise. It is further suggested that the NGOs take steps to maintain standards of objectivity and ensure that ideological predilections do not color their analyses. When claiming to evaluate the lawfulness of a party’s actions, the NGOs must not conflate lex lata (the law as it exists) with their preferred lex ferenda (what the law should be).

Policy-makers, diplomats, and journalists should more carefully scrutinize NGO-generated information. Subjecting NGO reports and statements to careful analysis will help ensure that these documents are produced at the highest standards. This would enable NGOs such as AI and HRW to most effectively fulfill their mission of promoting and protecting human rights.

[1] Unless otherwise indicated, all references to “the NGOs” in this monograph refer to AI and HRW.
[2] C. E. Welch (2001) uses the term “standard setting” to describe NGO involvement in the creation of human rights instruments. Here the term is expanded to include efforts to determine how those instruments should be interpreted.