Staff and boards of NGO Monitor, Prof. Gerald Steinberg, and Dov Yarden mourn the passing of our founding donor and longtime mentor and friend Dr. Harry Wechsler, of blessed memory. Prof. Steinberg authored the following letter to the Wechsler family in memory of Dr. Wechsler: 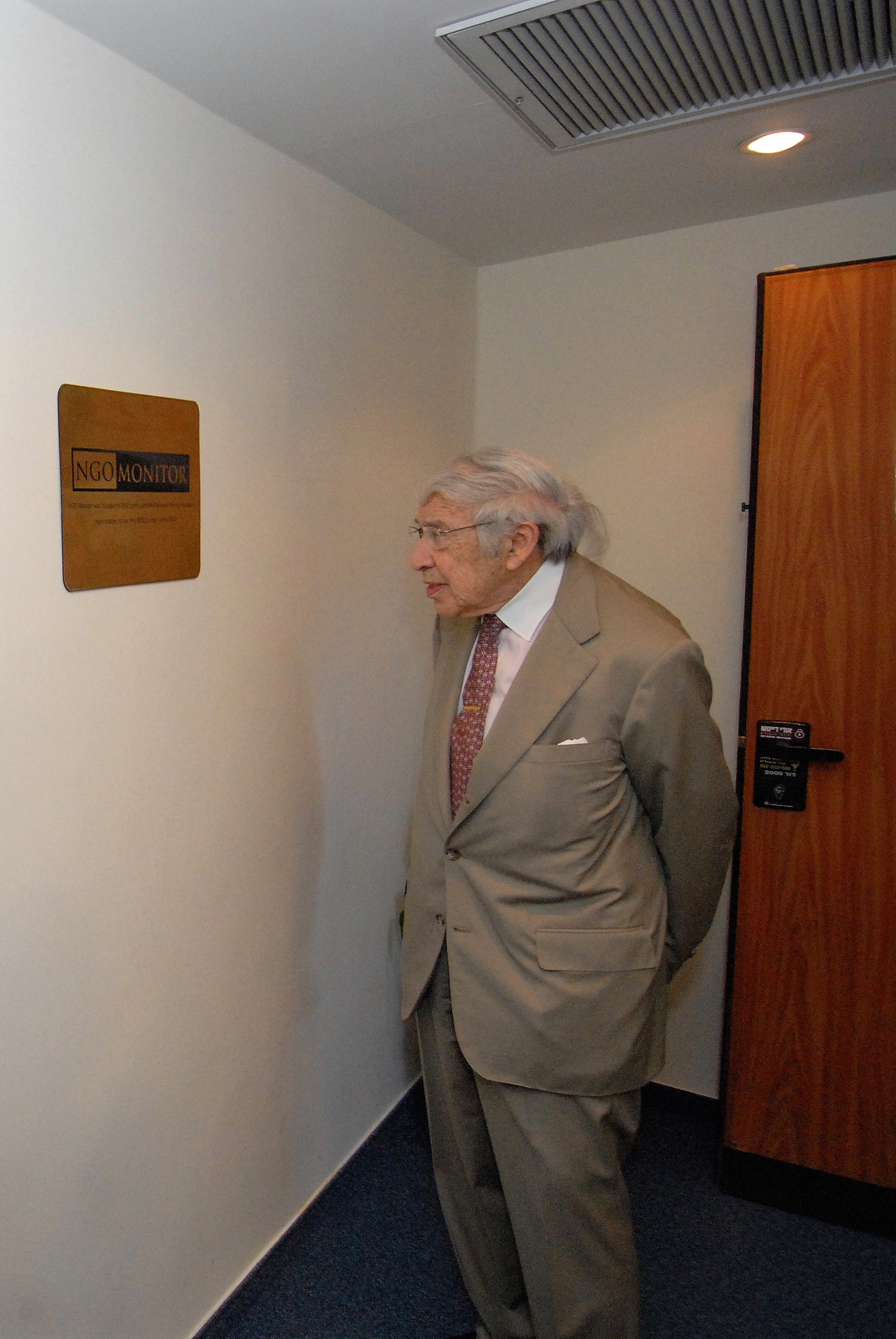 I first met Dr. Wechsler in 2002. It was a very difficult time in Israel, with terrorist attacks on buses, and in restaurants and shopping malls taking a terrible toll; Jerusalem felt like a city under siege. There were almost no guests in the usually full hotels, and we were the only ones in the King David’s small breakfast room. The fact that Harry had come to Jerusalem at this time was remarkable. As I gradually learned more about him and his life, I came to understand that for him, this was not exceptional at all.

I met Harry to discuss a small project that I had begun in cooperation with Ambassador Dore Gold at the Jerusalem Center for Public Affairs. As a US-educated professor of politics, based in Israel for 20 years (at the time), I was interested in exposing the irresponsible and damaging role played by powerful non-governmental organizations (NGOs) that exploited the language of human rights to demonize Israel. When I started to explain the importance of this work, which developed out of the notorious 2001 UN Durban NGO Forum a few months earlier, Harry immediately understood where I was going, and began probing with questions.

“Has no one had ever done something like this before? How would we get credibility and media attention? Could we really turn this academic research project into something effective? Who could we contact in Washington and London that could help us gain impact?” (This conversation went on for well over an hour.)

Shortly afterwards, Dr. Wechsler and the Wechsler Family Foundation became the co-founders of NGO Monitor, providing the first substantial donation to set up a website and hire the first researcher assistants, working under my direction. Harry was not a passive funder by any means, and we held monthly conference calls to discuss details and strategy. As I learned, he had a unique talent in turning abstract concepts into reality, and many of his suggestions were crucial in sharpening NGO Monitor’s product and impact.

Every year, he came to Jerusalem for detailed reviews of our work and meetings with the growing staff (NGO Monitor now has 25 employees). These reviews, like the hour-long phone calls, went into great detail – they forced us to be on our toes, while allowing us to show-off our accomplishments.

After the Ford Foundation came under harsh public scrutiny and criticism for funding the Durban debacle, NGO Monitor reports convinced the Foundation to pay more attention to its funding for NGOs that demonized Israel, and over the years, this funding ended. As we exposed the follies of Human Rights Watch (a major Durban player), including false allegations and fundraising efforts in Saudi Arabia, the “halo” that protected this and other NGO giants wore away. As the NGO-led political warfare and anti-Israel BDS campaigns expanded, we devised counter-strategies to “name and shame” the perpetrators.

As our partner, Harry took great pride in these accomplishments, including in recent years when NGO Monitor triggered debates and reforms in European NGO policies, and when we presented our research in the UN Human Rights Council.

After our intense meetings, Harry invited the JCPA and NGO Monitor teams to a joint dinner, where he would give a welcoming speech, talking about the centrality of Zionism to the Jewish people, recalling memories from the 1947/8 struggle for survival, quoting from classical Jewish sources, and praising us for the contributions that we were continuing to make. (Harry rarely talked about the important roles that he and his brother played in the miracle of the rebirth of Jewish independence after the Holocaust.) His words were exhilarating and helped us to renew the energy needed for the next round of NGO battles.

Over the years (over 15) NGO Monitor has gone on to demonstrate that we were on to something very significant. As a direct result of our research and analysis, the credibility of NGOs such as Human Rights Watch, that took the lead in bashing Israel under the façade of human rights and international law, has declined considerably; after seeing our reports, key individuals spoke out, such as Robert Bernstein, the founder of HRW, who denounced this organization on the pages of the New York Times. Gradually, the irresponsible NGO funding from European governments, which was diverted to BDS and demonization of Israel, has been reduced. In Israel, our contribution was widely recognized, including being awarded the Menachem Begin Prize in 2013 and the Bonei Zion Prize in 2017. In addition to many other achievements in his rich life, Harry’s role in NGO Monitor marked another milestone.

We will miss Harry and his close collaboration – his wise counsel will continue to resonate. NGO Monitor remains a joint project, and the Wechsler Family Fund will always be our Founding Donor.

May his memory be a blessing for his family and for the Jewish people.