On March 8, 2017, the Swiss Parliament voted (111 to 78 with 4 abstentions) to “amend the laws, ordinances and regulations so that Switzerland can no longer subsidize, even indirectly, development cooperation projects carried out by NGOs involved in racist, antisemitic or hate incitement actions, or in BDS (Boycott, Divestment and Sanctions) campaigns.”

Per Swiss procedure, the bill moves to the Swiss Council of States for another vote this week (June 13).

The votes follow a year of intense activity by NGO Monitor.

As reported in the Tages-Anzeiger, one of Zurich’s most widely circulated newspapers, NGO Monitor President Gerald Steinberg and Europe Desk Director Olga Deutsch visited Bern, Switzerland in March 2016. The trip was organized by the Swiss Israel Parliamentary and Friendship group. During the visit, Professor Steinberg briefed a group of parliamentarians on Swiss funding to NGOs active in the Arab-Israeli conflict. The parliamentarians took time to learn about direct Swiss funding and Swiss contributions via the Human Rights and International Humanitarian Law Secretariat (“Secretariat”). 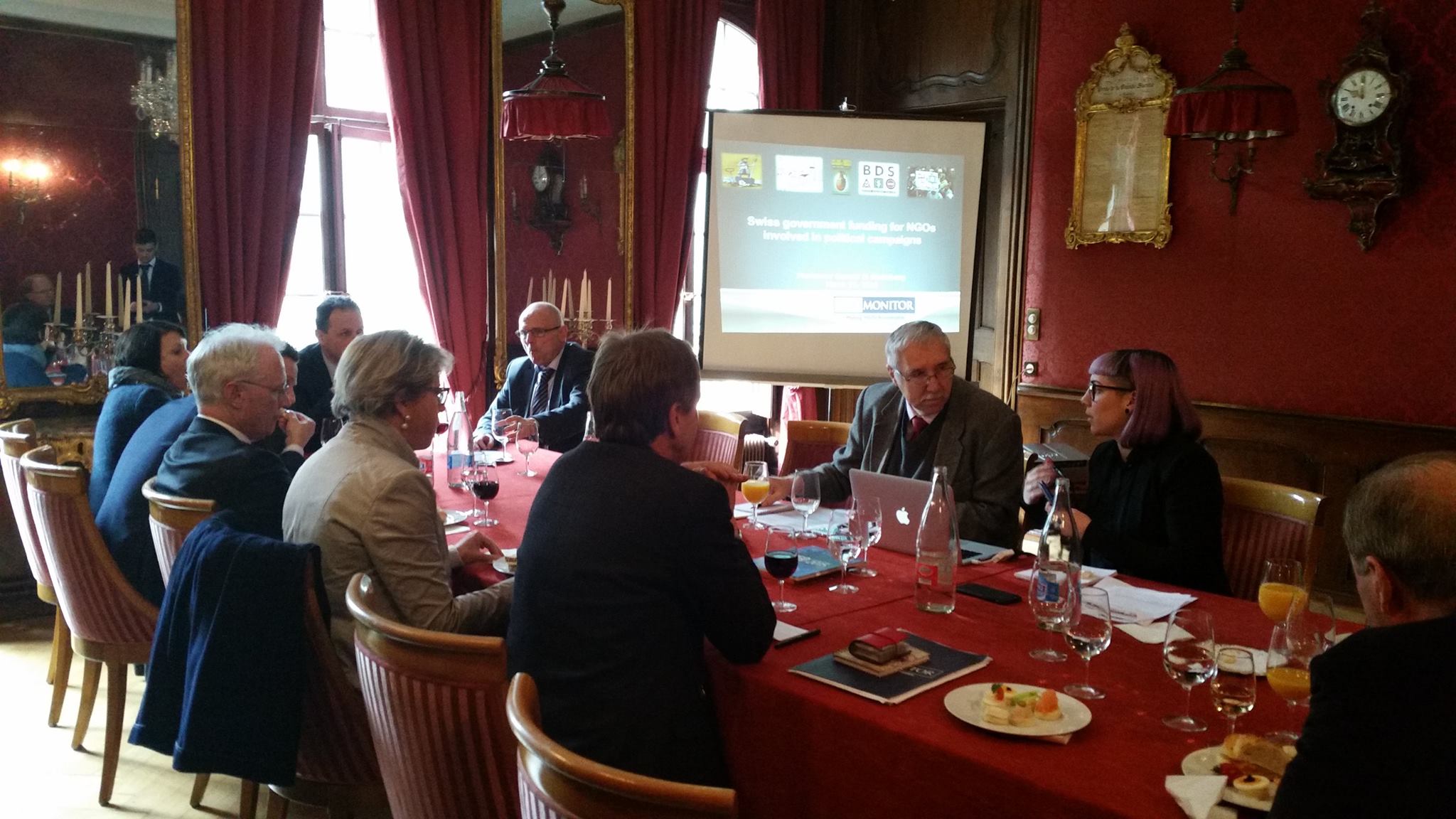 The Secretariat is a funding consortium, jointly supported by Switzerland, Denmark, Sweden, and the Netherlands, which funds Israeli and Palestinian NGOs. NGOs funded by the Secretariat engage in “lawfare” against Israeli officials and companies that do business with Israel, promote BDS (boycott, divestment, and sanctions) campaigns, advance a “1948 agenda,” exploit the false “apartheid” analogy to demonize Israel, and/or even promote antisemitic propaganda. NGO Monitor has extensively documented numerous concerns relating to the Secretariat.

In April 2016, Tages-Anzeiger reported that one of the participants in the March meeting, Swiss MP Christian Imark, initiated a motion signed by 41 MPs. The MPs asked the government to adjust the regulations through which Swiss taxpayer money is directly and indirectly distributed, in order to prevent NGOs that support racist, antisemitic, and hate activities from receiving Swiss development aid funds. This motion was later rejected by the government. (MP Imark credited NGO Monitor in a May 2016 interview on i24 news [beginning at 24:30].)

In late May 2016, Benjamin Weinthal reported in the Jerusalem Post on a series of front-page articles by Dominik Feusi in the Basler Zeitung (German). Feusi’s article “Opposition in Swiss Parliament to Money for Campaigns Critical of Israel” highlighted Swiss funding that mainly, if not exclusively, goes to organizations that are active in campaigns against Israel. MP Imark was again quoted, “It is clear that neutral Switzerland should not fund biased organizations anywhere in the world, nor organizations that are opposed to the principles and goals of Swiss foreign policy.”

Based on these articles, MP Imark submitted parliamentary questions to the Swiss EDA, asking about exorbitant salaries to Secretariat employees and other funding concerns. According to Basler Zeitung, in June 2016, Didier Burkhalter, head of the Department of Foreign Affairs, did not respond concretely to the questions related to the Secretariat contract signed by the Department of Foreign Affairs, “admit[ting] that Imark was better prepared than he and he did not know the contract. He invited Imark to discuss this with a coffee.”

In February 2017, Basler Zeitung published another article on Swiss funding to organizations in the Middle East, stating, “Switzerland finances in different ways organizations in Israel and the Palestinian territories that call for the annihilation of Israel and for the death of Jews.” According to the Jerusalem Post, “Silvia Müller, a spokeswoman for the Federal Department of Foreign Affairs, told the Post that ‘Switzerland decisively condemns calls for hate, violence, forms of racism and antisemitism….Switzerland works together with organizations that uphold democratic values and principles and work for human rights and humanitarian international law.’”

In March 2017, the lower house of the Swiss Parliament voted on the issue. Prior to the vote, MP Imark’s speech summarized the importance of the bill, and highlighted NGO Monitor’s research on the lack of due diligence in funding NGOs on the part of the EDA. NGO Monitor has unofficially translated the full text of Imark’s speech. Imark argued:

We have tried many times, with parliamentary questions and written correspondence, to elicit an explanation from the Swiss government and the corresponding departments for the concrete allegations and facts presented. But until now, unfortunately, we are without success.

For example, Switzerland funds the NGOs BADIL, Addameer, Al-Haq, Al Mezan, Breaking the Silence, the Gaza Community Mental Health Program, Adalah, Zochrot, and Social TV, with several millions of Swiss Francs, directly or indirectly. These are organizations that carry out and promote boycott and sanctions against Israel, that lead anti-Israel propaganda, legal warfare, anti-Zionist and racist campaigns, that call for the abolishment of the State of Israel, or even have direct ties to terrorist organizations.

Burkhalter, from the Department of Foreign Affairs responsible for providing the problematic funding, also gave a speech to the parliament before the vote, opposing the bill. He failed to respond to issues raised by the motion – namely the problems with funding “NGOs involved in racist, antisemitic or hate incitement actions, or in BDS (Boycott, Divestment and Sanctions).” Instead, he argued in favor of freedom of speech of Israeli NGOs.

In April 2017, the Swiss Foreign Affairs Commission issued a statement claiming that it “supports the aim of the motion, which is to ensure that public funds for development aid are used responsibly, in accordance with the fundamental values of Switzerland. However, it considers that the wording chosen is not judicious: it wishes to eliminate from the text any geographical or political indication explicitly referring to the conflict in the Middle East.” NGO Monitor documentation was used in the Commission’s report.

On January 11, 2017, the Swiss government denied freedom of information requests from a concerned Swiss citizen and NGO Monitor to provide documentation about Swiss funding to the Secretariat. The government’s response claimed that “access to official documents is likely to affect the interests of Switzerland in matters of foreign policy and international relations.” In April 2017, upon appeal, the Department of Foreign Affairs released 10 documents relating to the Secretariat, as well as several evaluations of Swiss projects in the region.

On June 13, 2017, the Swiss Council of States will vote on an amended resolution, with explicit references to BDS removed. The resolution is expected to pass, leading to increased accountability and scrutiny of Swiss funding to NGOs. The Swiss government will be forced to “amend the laws, ordinances and regulations so that Switzerland can no longer subsidize, even indirectly, development cooperation projects carried out by NGOs involved in racist, antisemitic or hate incitement actions.”

NGO Monitor will continue in our dialogue with the Swiss government to ensure that the necessary amendments are made, and that NGOs in contravention of the new regulations will no longer receive Swiss governmental support.