A new report by NGO Monitor details 50 incidents from the May 2021 Gaza conflict in which members of terror groups, such as Hamas and Palestinian Islamic Jihad, were listed as “civilian casualties” by NGOs. The report is accompanied by an interactive system, showing details about each case and revealing the misinformation hidden by NGOs.

Anne Herzberg, NGO Monitor’s legal advisor commented, “As in previous conflicts, NGO Monitor’s report demonstrates that NGO claims regarding specific incidents in Gaza are often false or grossly distorted and are not a reliable basis upon which to evaluate  legality. This lack of credibility largely stems from hastily drawn conclusions without access to the relevant evidence as well as the terror affiliations and political agendas underpinning NGOs and their publications. That the UN and most media outlets continue to uncritically repeat unverified NGO claims similarly calls into question the quality of their own reporting.  Policy makers and the media would do well to end their blind reliance on these actors.”

As seen in the report, one method used by NGOs to inflate civilian casualty numbers for political campaigns, as in the past, is to obscure or omit essential details about specific incidents – thereby erasing the role of terrorist groups. NGOs falsely classify Palestinian terrorists as civilians and ignore evidence that implicates terror groups in the deaths of Gazan civilians.

Our report also notes the failure of NGOs to identify the location of Hamas military installations and their proximity to civilian areas.

In one such example, NGOs claim a “passerby” was killed in an Israeli airstrike, despite Hamas’ admission he was a combatant and was killed adjacent to a military site.

NGO Monitor’s report also relates to Palestinian deaths caused by Palestinian munitions. Approximately 15% of the 4,300 missiles fired towards Israel in May fell short and impacted in Gaza. Whereas NGOs are unambiguous when they believe an Israeli airstrike caused civilian casualties, they use vague and inconclusive language when, in all likelihood, a failed Palestinian attack was responsible.

Many of these NGOs, such as the Palestinian Center for Human Rights (PCHR) and the Defense for Children International – Palestine (DCI-P) are funded by the European Union and European governments. Their information has been delivered to the International Criminal Court to build a case against Israel and is also used as a credible source by media outlets. 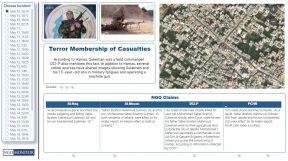 NGO Monitor research has identified 50 incidents in which Hamas and Islamic Jihad operatives killed in Gaza were falsely labeled by NGOs as civilian casualties, or in which civilians killed by Hamas were implicitly attributed to Israel.