Summary: Human Rights First (HRF), based in New York and Washington, D.C., serves as an example of a human rights NGO which generally provides proportionate analysis and advocacy on the Middle East and elsewhere throughout the world.  In contrast to politicized groups such as Human Rights Watch and Amnesty International, HRF presents a measured appraisal of human rights without erasing the context and while preserving the core principles of universality and single standards.  And although HRF officials, in an earlier framework, participated in NGO Forum of the 2001 Durban conference, Michael Posner, Executive Director of the organization, later denounced the racism and antisemitism that marred the Durban meeting.

Founded in 1978 as the Lawyers Committee for Human Rights, Human Rights First (HRF) is “a non-profit, non-partisan international human rights organization based in New York and Washington, D.C.”  According to HRF’s mission statement, the NGO “believes that building respect for human rights and the rule of law will help ensure the dignity to which every individual is entitled and will stem tyranny, extremism, intolerance, and violence.”

HRF’s core aim is to protect people at risk, including “refugees who flee persecution, victims of crimes against humanity or other mass human rights violations, victims of discrimination, those whose rights are eroded in the name of national security, and human rights advocates who are targeted for defending the rights of others . . . Human Rights First works to prevent violations against these groups and to seek justice and accountability for violations against them.”

HRF activities cover a wide range of issues in many countries throughout the world, including campaigning for the release of political prisoners held by non-democratic regimes.  For instance, HRF mounted a grassroots campaign to free Kurdish Iranian political and women’s rights activist, Dr. Roya Toloui, who was released from jail in October 2005.  The organization also worked to bring to justice the killers of Indonesian human rights activist, Munir.  In the US, HRF worked in support of the McCain Amendment, which bans cruel and inhuman treatment of prisoners.  HRF has been active in the Darfur campaign,  calling for the appointment by the UN of a senior peace envoy to deal with the crisis and has met with President Bush to urge him to work harder at bringing peace to the Darfur region.

HRF has consultative status at the UN and on occasion submits statements with official UN bodies, including the Human Rights Council.

Activities on the Arab-Israeli conflict

In contrast to many other NGOs claiming to promote human rights, HRF’s advocacy with respect to the Arab-Israeli conflict is generally balanced, acknowledging the harm caused to both sides and avoiding commentary that distracts from the pursuit of universal human rights.  To its credit, HRF does not selectively apply demonizing language or exploit international legal terminology such as the terms “war crimes,” “collective punishment,” or “violations of international law”.  Instead, the organization utilizes such terms sparingly.  HRF also explicitly and consistently recognizes Israel’s right to self-defense, stating that the Israeli government has a “right, indeed [an] obligation, to protect the security of its own citizens.”

In an article from 2002, HRF notes deep concern “about the rapid deterioration in condition in the Palestinian territories as a result of recent military incursions by the Israel Defense Force (IDF),” while also drawing attention to “raids that have been conducted into the offices of prominent Palestinian human rights organizations, and the severe restrictions on their ability to operate.”  In the same document and at its outset, however, HRF also condemns “Palestinian attacks on Israeli civilians” and calls on Palestinian leaders, specifically Yasser Arafat, to “make clear that the deliberate targeting of civilians, including suicide bombings, are grave breaches of the fundamental principles of international humanitarian law.”

The following graph provides a statistical picture of Human Rights First’s relative emphasis on Israel in 2006, in comparison to the lack of proportionality demonstrated by Amnesty and HRW 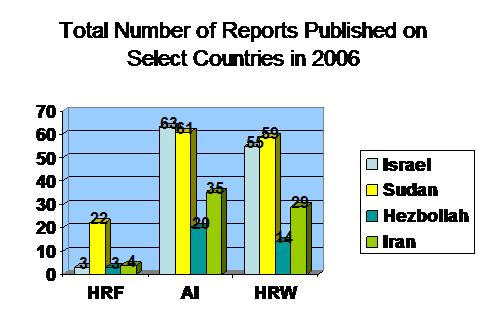 HRF’s publications on Israel and on Hezbollah were roughly equal and limited, while this NGO focused far more resources on the continuing carnage in Sudan.  Conversely, AI and HRW published more on Israel than on Hezbollah and Iran together and devoted roughly the equal efforts to condemnations of Israel and of Sudan.

HRF’s publications during the 2006 Lebanon war also demonstrate the credibility absent HRW and Amnesty reports.  For example, HRW claimed that it “found no cases in which Hezbollah deliberately used civilians as shields to protect them from retaliatory IDF attack.”  Similarly, Amnesty International alleged that “[t]he extent of [Hezbollah’s use of human shields] and its qualification in terms of international humanitarian law remains unclear.”  NGO Monitor’s detailed report comparing HRW’s and Amnesty’s coverage of the war with independent sources showed that many of these NGO claims were without basis.

In contrast, HRF’s reports were measured, credible, and did not single out Israel unjustly for condemnation.   One HRF statement called “upon Hezbollah and the Israeli government to exercise every precaution to protect civilians caught up in the conflict,” as “the international law of armed conflict imposes on all parties to the conflict strict requirements to protect noncombatants.” Another statement unequivocally declared that Hezbollah is bound by international law and called for an end to the use of human shields:  “We urge [that Hezbollah] refrain from using civilian populations to shield their military activities. Hezbollah is bound by the rules of international humanitarian law and they must not target civilians or civilian infrastructure.”   Rather than concluding, as HRW and Amnesty, that Israeli had already committed “war crimes” and violated the rule of “proportionality”, HRF refrained from premature and uninformed legal conclusions, asking that the “government of Israel respect the principle of proportionality in its military operations, so as to prevent the unnecessary suffering among civilian populations in Lebanon.”

In another example of upholding the universality of human rights, HRF issued a press release shortly after the war, criticizing the UN Human Rights Council for condemning Israel and ignoring Hezbollah.  The group stated, “[b]y addressing violations by Israel but not those committed by Hezbollah, the Human Rights Council has failed to respect its mandate in its consideration of the recent conflict in Lebanon.”

HRF, under its previous name, the Lawyers Committee for Human Rights, took part in the infamous NGO Forum of the 2001 Durban Conference on Racism.  As such, the officials of this NGO shared responsibility for the adoption of the “NGO document,” which demonized Israel.  Among other claims, this document stated that “targeted victims of Israel’s brand of apartheid and ethnic cleansing methods have been in particular children, women, and refugees” and adopted “a policy of complete and total isolation of Israel as an apartheid state….”

Like other NGO officials, including Ken Roth of HRW, Executive Director Michael Posner belatedly sought to disassociate his organization from this incitement. He stated that “there are serious human rights violations in the West Bank and Gaza that need to be condemned and we find the language [in the NGO statement] inaccurate and reject it…The zeal of one group on behalf of victims to make their point should not infringe on the rights of others.  But I agree with Irene [Khan of Amnesty International] that there is much of value in this document.”  However, Posner then admitted that the Durban process was disastrous for human rights, commenting that “the world needs to continue the global conversation about combating racism…To do this, though, it was clear we needed to address the very racism that marred the Durban meeting:  antisemitism.”

HRF has gone beyond lip-service regarding the need to address antisemitism and its expression through the pretext of “criticizing” Israel or Zionism, and has taken concrete steps to do so.  HRF has a section on its website devoted to the issue of antisemitism, has released several statements and reports, and has testified at the OSCE Conference on antisemitism.  In June 2007, HRF released a comprehensive survey on hate crimes including attacks on Jews, Muslims, the Roma and Sinti, as well as violence based on sexual orientation, and disability bias.  In the report, HRF notes “that in Europe and North America, authors of antisemitic threats and attacks frequently invoke Israel and Israeli policies as justification even while employing the language and symbols of Nazi Germany.”  This statement stands in sharp contrast to the many NGOs that employ Holocaust terminology and antisemitic imagery in order to condemn Israel.

Unlike other NGOs that use human rights claims to promote biased political agendas, HRF maintains balance with respect to its activities relating to the Arab-Israeli conflict and elsewhere.  HRF’s clear pursuit of universal human rights without an overarching political agenda serves as an example that other human rights advocacy organizations should emulate.