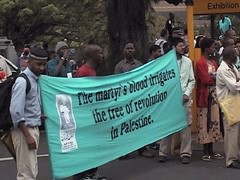 NGO Monitor has contacted the embassies of EU member states, as well as Switzerland and Norway, requesting information on their policy towards the UN Durban Review Conference scheduled for 2009. Specifically, NGO Monitor asked whether these governments had defined principles required of NGO grant-recipients regarding participation in the Durban Review Conference, and what lessons were learned from 2001.

Various governments have already made public statements expressing their concern over the Review Conference.

On January 23, 2008, the Canadian government announced that it would pull out of the conference and maintained that it will not fund NGO participation, marking a major change in comparison to the 2001 policies.

On February 15, 2008, French President Nicolas Sarkozy said “France will not allow a repetition of the excesses and abuses of 2001…I say to you: if ever our legitimate demands are not taken into account, we will disengage from the [Durban Review Conference] process."

On April 6, 2008, U.S. Permanent Representative to the United Nations, Zalmay Khalilzad, said that "[W]e will not participate [in Durban Review Conference] unless it is proven that the conference will not be used as a platform for anti-Semitic behavior." He also noted that the U.S. voted against U.N. resolutions seeking to convene a Durban Review Conference in 2009 because “we [the US government does] not believe there will be a meaningful review of any of the problematic aspects of the original Durban Conference.”

As seen below, many of the preliminary responses that NGO Monitor received from European governments were vague and did not answer the questions. Follow-up requests have been sent.

Extracts from some of the preliminary responses:

The following governments had replied as of 13 April 2008 (this includes embassies which informed NGO Monitor they are awaiting responses from their Ministry of Foreign Affairs):

The following governments have not responded to NGO Monitor as of 13 April 2008:

For more information on the Durban Review Conference, including coverage of the April Preparatory Committee, click here