NGO Monitor has identified a number of virulently antisemitic statements made by officials of the German Society for International Cooperation (GIZ)- a German government-owned agency that implements Germany’s humanitarian and development aid around the world.  GIZ has funded Israeli and Palestinian NGOs (non-governmental organizations).These statements include comparisons between Israel and the Nazis, blaming the downfall of Arab leaders on a “Hebrew spring” and depicting Israel as a two-headed monster.  GIZ members also posted messages to Facebook that justify Palestinian rocket attacks on Israeli civilians and endorse BDS (boycotts, divestment and sanctions) efforts.

Some of the antisemitic content was promoted by GIZ officials responsible for directing German funding to Palestinian NGOs, as well as by other colleagues at the agency.  Among these Palestinian groups are those that have glorified violence and terrorism.  According to its website, “GIZ currently employs a staff of 145 in the Palestinian Territories.”

In January 2016, Luke McBain, head of GIZ’s “Civil Society Programme Palestine” and of the program for “Strengthening Women in Decision-Making in the Middle East,” described Zionism as a “settler-colonialist movement,” claiming that this “explains everything,” including the “endless occupation.”

Referring to the 2014 Gaza war, McBain accused the Israel Defense Forces (IDF) of adhering to an “illegal military doctrine,” and claimed that “Responding to violence originating from a territory which you occupy is not self-defense.” 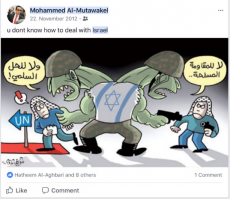 Mohammed Al Mutawakel’s Facebook post from July 11, 2014: “May the curse of Allah be upon you. Your days are numbered.” Translation by NGO Monitor

Safa Kamal el Naser is a GIZ regional advisor in Jordan. In December 2017, he shared a Facebook post claiming that a “Hebrew spring” was behind the downfall of Arab dictators Saddam Hussein, Muammar Qaddafi and Ali Abdullah Saleh.

Before joining the GIZ program “Values for Religion and Development” in 2016- a program that he heads, Ulrich Nitschke led the Local Governance and Civil Society Development Program and Future for Palestine at GIZ Palestine” and the chairperson of the GIZ’s Sector Network Governance for the Middle East and North Africa region.

He has used Facebook to promote BDS, advocate for Ahed Tamimi, deny the Jewish connection to the Temple Mount, accuse Israel of misusing the term “antisemitism” and stake out other anti-Israel positions. 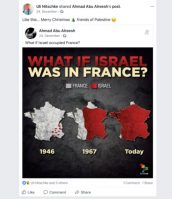 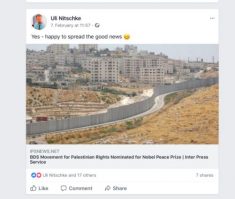 Ulrich Nitschke’s Facebook post from February 7, 2018, celebrating the reported nomination of the BDS movement for the Nobel Peace Prize 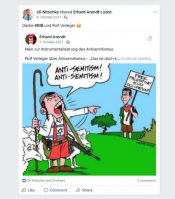 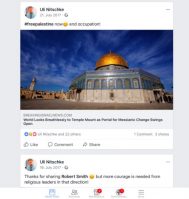 Ulrich Nitschke’s Facebook post from July 25, 2017, in which he shares a call for “the nations of the world” to defend “the Palestinian right for free access to Haram ash-Sharif.” The post also refers to the site as being referred to as the “Temple Mount” by “the West and Israel”. Translation by NGO Monitor 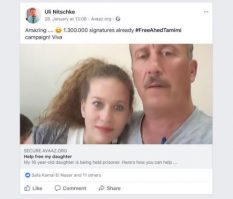 Henner Kirchner is a GIZ project manager. On Facebook, he advocated for charging Israeli Prime Minister Netanyahu with Holocaust denial in German court.  He has also defended Hamas rocket attacks against Israeli civilians and argued that Israel does not have the right to defend itself.

Henner Kirchner’s Facebook post from October 22, 2015: “It would be interesting to know whether Netanyahu was guilty of Holocaust denial. Maybe just present it to the next public prosecutor’s office – he is coming to Berlin”. Translation by NGO Monitor

Rudolf Rogg, has been GIZ’s country director in the West Bank and Gaza since 2009.  He has called on the EU and the UN to “end Israeli collective punishment”, and to claim that Hamas was not responsible for the abduction and murder of three Israeli teenagers in June 2014. 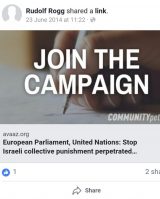 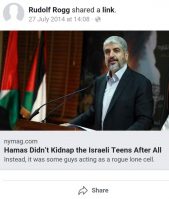 Tobias Thiel heads GIZ’s “Strengthening Reform Initiatives” project.  He has shared articles claiming that Israel committed a “deliberate massacre” in Gaza, and arguing that Israel does not have the right to defend itself. 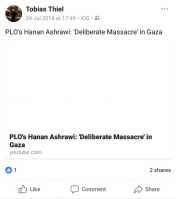 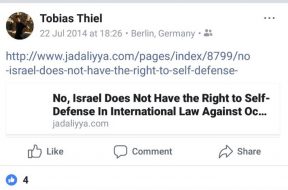 Tobias Thiel’s Facebook post from July 22, 2014, alleging that Israel does not have the right to defend itself from Hamas attacks from Gaza

Due to a severe lack of transparency, it is impossible to compile a comprehensive list of GIZ’s local NGO partners. According to available information, however, GIZ’s local partners in the region have included MIFTAH, PASSIA, and the Palestinian NGO Network (PNGO). MIFTAH and PASSIA have both celebrated Palestinian terrorism targeting Israeli civilians.

In addition to collaborating with GIZ on a project in East Jerusalem, a number of high-ranking GIZ officials – including Rudolf Rogg, Ulrich Nitschke, and Luke McBain (see above) – have regularly met with PASSIA and participated in workshops with them.