For over a decade, NGO Monitor has documented and analyzed the obsessive targeting of Israel by Ken Roth, the head of Human Rights Watch (HRW). In this process, we have examined Roth’s numerous false factual claims regarding events involving Israel, as well as blatant double standards and large-scale distortion of international law in order to promote his personal and ideological objectives.

This summer’s 51-day Gaza war was no exception, and if anything Roth’s activities, particularly on Twitter, reflected even greater personal animus towards the Jewish state and even less credibility.

NGO Monitor has catalogued more than 400 Ken Roth tweets about Israel between July 5 and September 2, 2014.  On average, the number of tweets on Israel constituted a quarter of his feed. During some periods, this number approached 50-60%. (For different aspects of this phenomenon, see also “The Twitter Hypocrisy of Kenneth Roth” by Jonathan Foreman in Commentary Magazine and “Most of Ken Roth’s most popular tweets are anti-Israel lies” on the Elder of Ziyon blog.)

Roth’s tweets include significant levels of sarcasm, vitriol, and deep-seated hostility. The content consists almost entirely of condemnations and attacks against Israel. Many involve retweeting of hostile articles and false or unverified claims, based on rumors, from fringe sources. Common themes include labeling Israel’s actions in Gaza as “war crimes,” “indiscriminate,” “unlawful,” and “collective punishment”; denying Hamas human shielding and other fundamental violations; sarcastic comments solely towards Israeli leadership; promotion of Hamas propaganda while attacking Israeli PR efforts; silence on the rise in global antisemitism and denigration of those speaking out against it; and obsessive attacks on critics as “Israel partisans” and part of the “Hasbarah crowd.” No similar sarcasm or animosity is expressed towards pro-Palestinian activists – Roth’s personal and emotional agenda of hostility towards Israel clearly stands out.One of Roth’s most offensive Twitter moments was his retweet of a highly propagandistic advertisement published in The New York Times and The Guardian equating “Nazi genocide” with “the massacre of Palestinians in Gaza.” (Professor Deborah Lipstadt refers to this as soft-core denigration of the Holocaust.)

This advertisement was placed in the names of 327 “Jewish survivors and descendants of survivors and victims of Nazi genocide” who “unequivocally condemn the massacre of Palestinians in Gaza.” In the text, Israel is condemned for “colonialism, racism, and genocide” and unnamed “right-wing Israelis” are compared to Nazis, and it ends with support for BDS in the form of a “full economic, cultural, and academic boycott of Israel.” (The ad was sponsored by the International Jewish Anti-Zionist Network.)

The picture was originally posted, under the tagline “‘Never again’ must mean NEVER AGAIN FOR ANYONE!,” by HRW European Media Director Andrew Stroehlein, and was also tweeted by HRW EU Director Lotte Leicht. 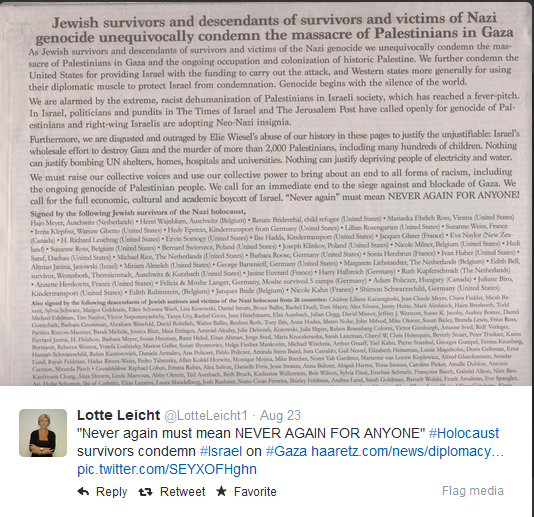 As noted, Roth’s twitter campaign against Israel and his wider moral failures are consistent with other expressions of extreme hostility, as demonstrated in numerous examples over the past several years, including: