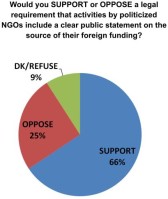 In advance of the joint conference marking the 60th anniversary of the Universal Declaration of Human Rights, and the Convention on the Elimination and Prevention of the Crime of Genocide, NGO Monitor and Bar Ilan University commissioned a poll on Israeli attitudes towards human rights and NGOs. Israelis overwhelmingly support human rights, but expressed skepticism about NGOs and their objectivity in the Arab-Israeli conflict.

89% said that human rights are important, but only 19% of respondents thought that NGOs claiming to promote these values are equally concerned with Israelis and Palestinians, and 51% recognize NGO favoritism toward Palestinians. 64% concluded that, in light of the UN´s World Conference Against Racism in Durban in 2001, NGOs are inherently biased against Israel. Over two-thirds of those questioned said that critical NGO reports hurt Israel´s image internationally.

Additionally, 66% of respondents demanded transparency regarding foreign government funding for NGOs in Israel. As NGO Monitor´s detailed study, Europe´s Hidden Hand and other publications have demonstrated, there is a lack of transparency and accountability in government funding of NGOs in the region, and some of the most radical, anti-Israel groups receive money and support from European governments.