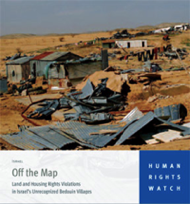 On March 31, 2008, Human Rights Watch issued a 130-page report entitled “Off the Map: Land and Housing Rights Violations in Israel’s Unrecognized Bedouin Villages.”  NGO Monitor published an initial analysis on April 1, 2008 entitled, "HRW´s Report on Israel and the Bedouin: Destructive Contribution to a Complex Problem," and has been preparing a detailed analysis of HRW’s claims since then.

The report’s central allegation is:

"Tens of thousands of Palestinian Arab Bedouin, the indigenous inhabitants of the Negev region, live in informal shanty towns, or ‘unrecognized villages,’ in the south of Israel. Discriminatory land and planning policies have made it virtually impossible for Bedouin to build legally where they live, and also exclude them from the state’s development plans for the region. The state implements forced evictions, home demolitions, and other punitive measures disproportionately against Bedouin as compared with actions taken regarding structures owned by Jewish Israelis that do not conform to planning law". [1]

– Terms such as “indigenous people” and "ancestral land" in reference to Bedouin land claims are misleading. Bedouin culture is nomadic, and they did not lay claim to specific lands until recently. [2]
– Referring to Bedouin land claims as "land rights" is similarly misleading. The Bedouin living in "unrecognized villages" have no title to the land, and did not have registered land title under Mandatory Palestine or Ottoman rule.

History of the Bedouin: OverviewLand and Property Issues Regarding the Bedouin

Challenges Presented by the Bedouin Community

History of the Bedouin: Overview

The Bedouin come from nomadic tribes which originated in the Arabian Peninsula, but have since moved across the political boundaries of Israel, Egypt, Jordan, and other countries in the area. An accurate count of Bedouin is virtually impossible, but most sources estimate that there are currently around 170,000 Bedouin in Israel, at least 1,250,000 in Egypt, and according to the Jordanian government, the majority of Jordan’s population is Bedouin, although no estimate is provided.

Land and Property Issues Regarding the Bedouin: "Off the Map" ignores and distorts Property Law and Planning Law.

Section Summary: HRW’s central claim in "Off the Map" is that Israel "confiscates" Bedouin land. Most Bedouin have traditionally chosen, however, to live a nomadic lifestyle without a systematized property system, grazing their livestock across large areas of land. In other words, Bedouins have not traditionally owned land, and Bedouin tribes did not take steps to acquire legal ownership at any time in history, including under the British Mandate in Palestine and the Ottoman Empire. The HRW report acknowledges the historical difficulties in encouraging Bedouin to blend into a modern state property framework [3],  yet the important implications of this point are largely ignored. Indeed, most of HRW’s report proceeds as if exactly the opposite were true – that is, as if the Bedouin have legal title to lands on which they squat.
A) Land Registration:
As HRW mentions [4], in 1858, the Ottoman Empire created a modern system of private ownership. Land owners were required to enroll their land in the land registry (known as the tabu). Those who failed to register would be denied title. Such a system gives potential buyers the ability to insure that sellers indeed have legal title and that the land has no extant restrictions, thus avoiding potential conflicts with third parties.

Bedouin therefore had the opportunity to register for land ownership during Ottoman rule and consequently, during the British Mandate as well, but most failed to do so. Human Rights Watch claims, nonetheless, that Israel "steals" Bedouin land:

Analysis: There is no recognized human right granting individuals or communities the right to opt out of a state’s property laws and instead claim legally cognizable rights under an alternative “traditional” system.
Analysis: HRW provides no evidence to support its claim that the Bedouin had any less information about the registration process than other groups at the time.
Analysis: It is unclear in what sense HRW intends this statement to establish Bedouin land rights. In fact, the statement suggests that Bedouin willingly and knowingly waived legal title to lands they used in order to avoid paying property taxes and comply with military conscription laws. There is no recognized human right to engage in tax evasion or “draft-dodging,” and no recognized human right to establish property rights by alternative means in order to abet tax evasion or “draft-dodging.”

B) Distortion of Planning Law

"One of the problems of the unrecognized villages, as mentioned previously, is that in the original Israeli master plan the government zoned the land that the villages already occupied as non-residential land, in most cases agricultural land. Under Israeli law it is illegal to plan or build buildings on land that is not zoned as residential . . . in cases where construction by Jewish Israelis occurred . . . without obtaining necessary permits, the authorities provide retroactive legalization. One example is the individual farms mentioned in Chapter IV, many of which had not secured appropriate zoning and building permits at the time they were built and which are now being retroactively legalized."  [8]

This is a disingenuous and misleading comparison. The term "unrecognized" creates the misimpression that Israel has discriminated against Bedouin by creating exceptionally restrictive zoning rules. In fact, zoning violations are the least of the Bedouin’s illegal practices: the villages in question are "unrecognized" because they consist of squatters residing on stolen state lands. The correct comparison is not with other Israeli citizens who have violated planning laws, but with other Israeli citizens who squat on stolen state land.

Challenges Presented by the Bedouin Community:

Section Summary: "Off the Map" creates the illusion that Israel has the overt intention of oppressing the Bedouin: "Israeli policies have created a situation whereby tens of thousands of Bedouin citizens in the Negev have little or no alternative but to live in ramshackle villages and build illegally in order to meet their most basic shelter needs. [9]"  Central aspects of this issue, however, including environmental impact, the Bedouin birth rate, polygamy, and drugs are erased.

"Off the Map" condemns Israel for not allowing the Bedouin to continue their "traditional means of livelihood such as herding and grazing" [10]  Israel’s policy of demolishing illegally built homes in unrecognized Bedouin villages (on state-owned lands) is "discriminatory, exclusionary, and punitive." [11]  However, this one-dimensional analysis erases the considerable damage the nomadic lifestyle has on the environment:

B) Birth Rate and Polygamy

The Bedouin population in Israel has the highest rate of population growth in the Middle East (roughly 5%). This central fact – and its contribution to Bedouin poverty – is totally ignored in "Off the Map", but it presents severe challenges to Israel’s policy of providing free and subsidized medical and social services to the Bedouin community, especially those in semi-urban contexts. As a group of Israeli and American researchers have argued in a 1998 issue of the Journal of Infectious Diseases, "the high Bedouin birth rate coupled with settlement in non-urban areas are both major factors contributing to the several fold higher hospitalization rates in the Bedouin youth population," They use the example of diarrhea as an example, but there are others.

According to estimates, roughly a quarter of Bedouin men have more than one wife — a situation with serious emotional, economic, and social consequences. For example:

Furthermore, as Farouk Amrur, chairman of the Beit Berl Jewish-Arab Institute, has noted, Israel has avoided responses "’because it fears confrontation with Bedouin society, even though polygamy is illegal [under Israeli law]." Government programs in coordination with Ben Gurion University faculty members [13] have been instituted, which include seminars on rehabilitating families, on financial management of households, and couples therapy. But HRW totally ignores this issue in its discussion of Israel’s challenges with respect to the Bedouin.

The Bedouin are the major vehicle of drug and weapons trafficking in Israel, the Palestinian Authority, and Egypt, according to Joshua Gleis. [14] Because Bedouin society traces back thousands of years, "they are fiercely independent" across all borders. Gleis describes the phenomenon as follows:

"Smuggling of women (known as the "white slave" trade), along with drugs, weapons and terrorist operatives is achieved by a number of methods: on foot, by all-terrain vehicles and SUVs, through tunnels and even by camel. Having entered Israel, the smuggled goods are transferred to Israeli Bedouin, usually of the same tribe, and transported to larger metropolises like Tel Aviv and Haifa."

HRW completely erases this issue in its discussion of Israel’s challenges with respect to the Bedouin.

Israel’s Considerable Effort to Support the Bedouin
Section Summary: On July 23, 2007, the Israeli Ministry of Justice sent a policy response to HRW’s queries, including details on the considerable effort by the government to support Bedouin moves to planned townships. "Off the Map" ignores or minimizes the importance of the information provided in this document.As the document makes clear, the Israeli government is giving away developed land for free or greatly reduced prices to Bedouin. Such land grants are rarely made by Israel or any other government, and are not available to the general population of Israel. In addition, Israel offers compensation for the structures being relinquished by Bedouins moving to the townships, even though they have no legal title to the structures. In addition, Israeli courts have issued numerous decisions related to government support of the Bedouin, such as HCJ 5108/04 and HCJ 4500/00. HRW makes virtually no mention of these decisions, instead creating the politically charged misimpression that Israeli courts consistently discriminate against the Bedouin.One of the central condemnations of Israel in "Off the Map" centers on the issue of the social and economic support that Israel provides to the Bedouin community within the planned townships.

Analysis: HRW’s statement is inconsistent with the statistics in the Ministry of Justice response: "there are more than 170,000 Bedouins living in the Negev desert area. Most live in urban and suburban centers, legally planned and constructed . . . About 70,000 Bedouins still choose to continue to live in illegal clusters of buildings in tens of communities throughout the Negev, ignoring the planning procedure of the planning authorities in Israel."
Analysis: Israel devotes considerable resources to support Bedouin needs. For example:

Additionally, HRW omits the following incentives the Israeli government grants to Bedouin who move to planned townships, as detailed in the Ministry of Justice memo:

HRW singles out Israel to promote its political goals.

Section Summary: As noted above, the Bedouin live in Israel, Saudi Arabia, Jordan, and Egypt. Conflicts with these governments arise consistently, yet HRW has chosen for political purposes to focus only on Israel.

The following examples illustrate that Israel is not alone in its challenge to deal with the Bedouin:

Despite these problems, a review of HRW’s website reveals that the NGO has not issued any reports on the human rights situation of the Bedouin in any country, except for Israel.

"Off the Map" is a politically charged document. It offers a one-sided view of Israeli property and planning law in general and of the highly complex Bedouin situation. HRW’s simplification of Israel’s challenges regarding the Bedouin, coupled with the organization’s choice to exclude discussion of the Bedouin in other countries is further evidence of HRW’s continued political goal to demonize Israel.