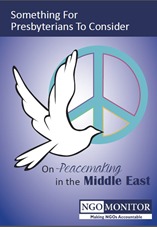 Click to view the full PDF version of this guide.

The Presbyterian Church has a unique opportunity to act as peacemakers in the Israeli-Palestinian conflict. As Christians who care about the Holy Land and the peoples and faiths living there, as well as U.S. citizens whose government remains deeply involved in Israeli-Palestinian peacemaking, Presbyterians hold genuine potential for positive influence in the Middle East.

As an antidote to the pull of politicization that so often moves those who set out to work within this conflict, remembering what it means to be a peacemaker is paramount.

The influence within the church of BDS activists threatens to draw Presbyterians away from their peacemaker responsibility and toward becoming active participants in the Israeli-Palestinian conflict.

Peacemakers do not want to worsen the conflict. Peacemakers seek to create trust between conflicting sides, toward creating an atmosphere of reconciliation.