According to articles published this week by Basler Zeitung (Pierre Heumann, Palästinenser kritisieren EDA, January 16) and Jerusalem Post (Benjamin Weinthal, Swiss government hosts $85,000 event aiming to unify Hamas and Fatah, January 16), the Swiss government and an unnamed Finnish NGO, later identified as Crisis Management Initiative (CMI), spent together $85,000 on a workshop in Geneva whose purpose was to promote reconciliation between Fatah and Hamas.

The articles explain that the Swiss Federal Department of Foreign Affairs contributed nearly $72,000, while the Finnish NGO contributed $18,000, to the event. This is not the first instance of Swiss engagement with Hamas. Switzerland has been directly involved in reconciliation efforts between Fatah and Hamas since 2014, reinforcing these efforts mid-2016.

As reported, a Palestinian NGO, The Palestinian Center for Policy Research & Strategic Studies – Masarat, played a key role at the workshop. Hani Al-Masri of Masarat is a former member of the EU- and US-designated terrorist organization the Popular Front for the Liberation of Palestine (PFLP).

Al-Masri openly supports anti-Israel BDS (boycott, divestment and sanctions), and published an article in 2015 titled “Boycott: an Effective Weapon.” Masarat is also a partner organization in the Oxford Research Group’s Palestine Strategy Group. The Palestine strategy group supports “resistance in all its forms including the growing global movement for boycott sanctions and divestment,” as well as the “right of return” for Palestinian refugees. The Oxford Research Group is funded, among others, by the Swiss government.

No further information on the workshop or on the actors involved is publicly available.

This is not the sole example of the Swiss government partnering with anti-Israel NGOs to legitimize Hamas. A 2015 newsletter from a Swiss NGO swisspeace mentions the “joint effort between the political directorate of the FDFA, swisspeace, the SDC and in partnership with the UN” towards Hamas-Fatah reconciliation. Swisspeace’s website reports that “swisspeace together with PalThink for Strategic Studies and the Birzeit University has facilitated meetings between Palestinian civil society representatives about their role in the Palestinian reconciliation process” – this under the title “Mandate for the Federal Department of Foreign Affairs and UNDP, 2016-2017.” No further information is available – the names of the civil society organizations are not specified.

Swisspeace posted and then deleted a report titled “Conflict Sensitivity in Gaza: Bringing together Fatah and Hamas.” The links found now go to entirely unrelated reports, as seen in this google search: 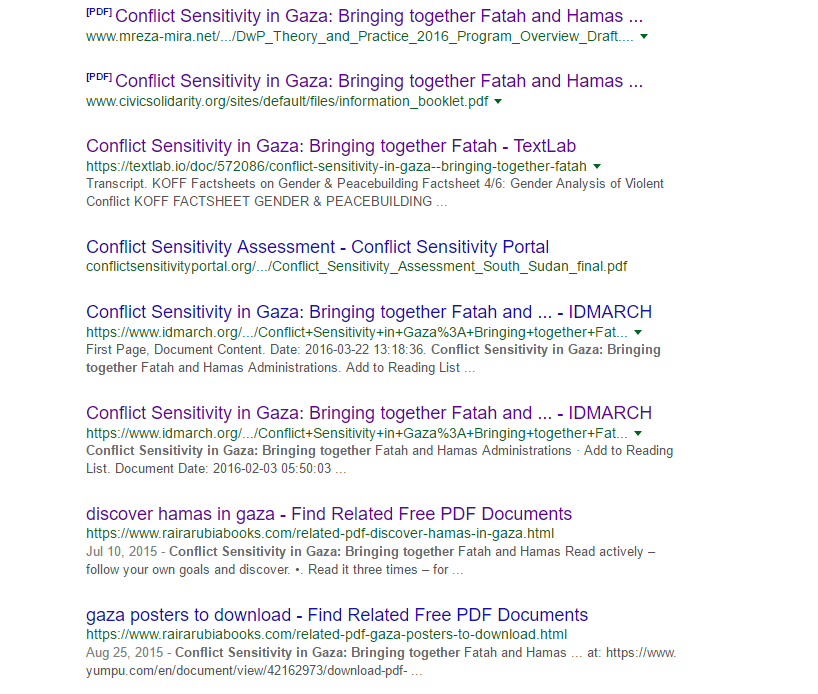 In response to NGO Monitor’s request to receive publication information, swisspeace wrote: “There was some IT-problem that caused, that the title was shown on google, myself I can not explain you in detail why, sorry… But anyway, we can not provide you with the study you search for since it doesn’t exist.”

Like Masarat, swisspeace has a strong partisan approach to the conflict. In its 2015 newsletter on “Swiss Actors in the Israeli-Palestinian Conflict”, swisspeace promoted an event on the Kairos Palestine document, dedicated a section to the publication “EU Differentiation and Israeli Settlements” of the European Council on Foreign Relations (ECFR), and another section to the NGO Ecumenical Accompaniment Programme in Palestine and Israel (EAPPI).

The 2009 Kairos Palestine document characterizes terrorist acts of “armed resistance” as “Palestinian legal resistance.” “EU Differentiation and Israeli Settlements” calls for sanctions against all Israeli entities that have activities in or apparent financial contacts with Israeli settlements, claiming that this does not constitute BDS. EAPPI is a program under the auspices of the World Council of Churches that sends volunteers to the West Bank to “witness life under occupation”; upon their return, EAPPI dispatches these volunteers to promote anti-Israel BDS.

Swisspeace also held an event commemorating the “Nakba” in 2013.