From April 29 – May 6, 2018, the Center for Constitutional Rights (CCR), an American non-governmental organization (NGO) that promotes BDS (boycott, divestment, and sanctions) and lawfare campaigns against Israel, led a trip to Israel and the West Bank labeled as the “Justice Delegation.” This trip, made up of self-proclaimed social justice advocates, claimed to provide a “better understand[ing of] the human rights situation in Israel and Palestine.”

In sharp contrast, participants met exclusively Palestinian and Israeli organizations that promote a one-sided Palestinian narrative of the conflict. These NGOs include those that promote BDS, lawfare, antisemitism, and even some that have links to the Palestinian Front for the Liberation of Palestine (PFLP) terrorist organization. Throughout the trip, delegates tweeted using the hashtag #JusticeDelegation, exposing their own biased itinerary.

On May 2, Vince Warren – Executive Director of the Center for Constitutional Rights – tweeted that the “#JusticeDelegation met with @Addameer…”

The #JusticeDelegation met with @Addameer who calls on the international community, and UN human rights bodies, to use all diplomatic and legal means to pressure Israel to end its violations against Palestinian children in East Jerusalem. Read more: https://t.co/l1IRUKwywG

The Palestinian NGO Addameer is a leader of campaigns in support of Palestinians prisoners convicted of security offenses, referring to them as “political prisoners” and altogether omitting the context of violence and terror.

More importantly, according to Fatah, Addameer is an affiliate of the PFLP. Addameer’s former vice-chairperson Khalida Jarrar is a senior PFLP official. Jarrar was administratively detained on April 1, 2015 by Israeli security forces. On April 15, 2015 she was indicted for various offenses including active membership in a terrorist organization (the PFLP) and inciting violence through a call to kidnap Israeli soldiers to be used as “bargaining chips for the release of Palestinian prisoners.” Jarrar accepted a plea bargain and was reportedly convicted on “one count of belonging to an illegal organization and another of incitement” receiving a 15-month prison sentence with an additional 10-month suspended sentence. She was released from prison on June 3, 2016. According to Addameer, Jarrar was re-arrested in July 2017 for six months. In December 2017, the detention was extended by another six months to July 2018. At least 10 other Addameer staff members have ties and/or have been arrested for being affiliated with the terror group.

On May 3, the CCR delegation held a video session with founder and director of the Palestinian NGO Palestinian Centre for Human Rights (PCHR) Raji Sourani.

The #JusticeDelegation had to be briefed by prominent #humanrights Atty @RajiSourani by skype because no one is allowed in or out of Gaza. Despite what their facing, @pchrgaza has a robust training program for young women and men lawyers.  More here: https://t.co/erRal7Mend https://t.co/DjzcXMkajM

From 1977 to 1990 Sourani was “prohibited from leaving Palestine (sic).” According to a 1995 article in the Washington Report, Sourani served “a three-year sentence [1979-1982] imposed by an Israeli court which convicted him of membership in the illegal Popular Front for the Liberation of Palestine…” He was also denied a US entry visa in 2012. Sourani was imprisoned an additional three times “in 1985 and 1986…” and held in administrative detention in 1988. From 1986 to 1987 he was “restricted from legal work for one year by an Israeli military decision issued by the Israeli Military Governor.”

In February 2014, the PFLP organized a ceremony in Gaza honoring Sourani for winning the “Alternative Noble Prize.” Rabah Muhana, a member of the PFLP Political Bureau, delivered a speech at the prize ceremony.

PCHR is a leader in anti-Israel lawfare campaigns, ignores the existence of terrorism against Israeli civilians, and presents a distorted version of the conflict based only on the Palestinian narrative. PCHR regularly describes Israel’s policies as “apartheid” and accuses Israel of “ethnic cleansing,” “war crimes,” and the “Judaization of Jerusalem.” 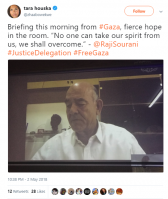 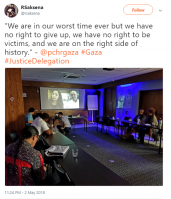 On, May 3, Justice Delegation participant Natasha Lycia Bannan tweeted that the group met with “An Afro-Palestinian legend.” This refers to Ali Jiddah, a member of the PFLP who was imprisoned by Israel for 17 years for carrying out grenade attacks against Israeli civilians in Jerusalem in 1968.

An Afro-Palestinian legend, showing the rubber bullets & tear gas grenades that Israeli soldiers fire at Palestinian children. A former political prisoner, he’s clear on who he is and place in Palestinian history. “I am part of the stones of the old city.” #JusticeDelegation pic.twitter.com/kA5QsKQJBu

According to journalists who were given information directly from CCR, the group also met with Al-Haq, an NGO active in BDS and lawfare. The organization’s General Director has alleged ties to the PFLP. According to a 1995 Israeli submission to the UN, Jabarin was convicted in 1985 for recruiting members for the PFLP. Jabarin was also found guilty of arranging PFLP training outside Israel and was sentenced by Israeli courts to 24-months imprisonment, of which he served nine. In 1994, Jabarin was again arrested for alleged links and placed in administrative detention for six months. An Israeli statement to the UN notes that he “had not discontinued his terrorist involvement and maintains his position in the leadership of the PFLP.”

Meetings with Antisemitic NGOs and Individuals

On May 2, the CCR delegation met with BADIL. Vince Warren noted on Twitter that BADIL has “amazing resources.”

BADIL is a Palestinian NGO that holds annual “right of return” contests and has published virulently antisemitic cartoons as well as imagery promoting the elimination of Israel. 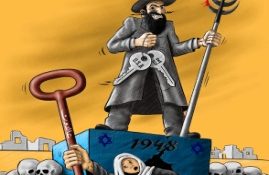 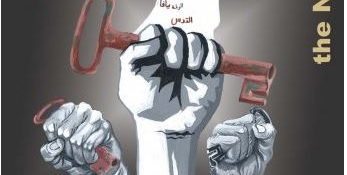 Badil’s rhetoric includes accusations of “apartheid,” “ethnic cleansing,” “genocide,” “war crimes,” “colonization,” and “racism,” as well as supporting a Palestinian “right of return.” In June 2017, BADIL was a signatory to a written statement to the United Nations Human Rights Council that accused Israel of maintaining policies that “amount to colonization.” It further claimed that Israeli acts amount “to grave breaches, crimes against humanity, and/or war crimes.”

The #JusticeDelegation met with @BADIL_Center and learned about colonialism through annexation and denial of the #humanright to self-determination. Read more here about how it works: https://t.co/HKHsr6PbWm https://t.co/5Xci7JfrSs

Manal Tamimi frequently utilizes antisemitic and violent rhetoric and imagery on social media. In August 2015, Tamimi tweeted, “I do hate Israel, i (sic) wish a thrid Intefada (sic) coming soon and people rais (sic) up and kills all these zionist settlers everywhere.” 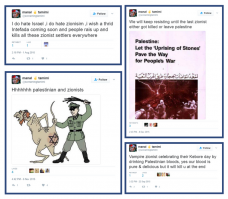 Based on her regular tweets featuring virulently antisemitic imagery, following an official complaint by NGO Monitor, the United Nations Office of the High Commissioner for Human Rights removed Manal Tamimi from a list of “human rights defenders.”

On May 2, the CCR delegation went on a tour of Jerusalem and the West Bank.

The #JusticeDelegation was thrilled to meet with @GrassrootsJlem! They have an *amazing* project called the Kite Campaign which unites the best of experiential tourism, advocacy, economic development and community work. Check it: https://t.co/oNyrihZyPd https://t.co/9xLSs07JRq

Grassroots Jerusalem is an Israeli NGO that promotes BDS, a Palestinian “right of return,” and falsely claims that “Israeli authorities began early on to implement strategic policies of land confiscation, displacement, and colonization in order to re-engineer Jerusalem’s demographic and geographic character.”

Powerful briefing… Anyone visiting Jerusalem should connect with @GrassrootsJlem. I learned a lot. https://t.co/bFU0R9J30o

On May 1, the CCR delegation went on a tour of Hebron with the Israeli NGO Breaking the Silence.

Breaking the Silence makes sweeping accusations based on anecdotal, anonymous, and unverifiable accounts of often low-ranked soldiers. These “testimonies” lack context, are politically biased, and erase the complicated reality in the West Bank. In addition, they reflect a distorted interpretation of the conflict in order to advance the political agenda of Breaking the Silence activists, thereby fueling the international campaigns against Israel.