In April 2021, Human Rights Watch (“HRW”) released a 217-page publication titled “A Threshold Crossed: Israeli Authorities and the Crimes of Apartheid and Persecution.” HRW asserted that Israel is an apartheid state both within its pre-1967 territory as well as in the West Bank and Gaza. The title of the report and its contents assert that recent events and actions have created a situation where Israel has “crossed a threshold” into apartheid. The fact that HRW and other NGOs have campaigned intensively to promote the apartheid label for more than 20 years is not mentioned. HRW’s goal is clear, as evidenced by the report’s narrative and recommendations: end the existence of Israel as the nation-state of the Jewish people, allow all Palestinians worldwide to freely enter Israel, open the borders between Israel and Gaza and the West Bank, and convert the area into a Palestinian majority state.

As documented below in great detail, the HRW publication is fundamentally flawed, using lies, distortions, omissions, and blatant double standards to construct a fraudulent and libelous narrative demonizing Israel. A careful examination of the text shows that HRW conducted almost no primary research. Rather, the text is bloated with cut-and-paste phrases, and quotes and conclusions taken from third-party sources – notably, other political NGOs participating in the same “apartheid” campaign against Israel. In fact, more than half of all the citations in the report are from these NGOs. HRW’s references are glaringly thin on primary documents, such as official Israeli government reports and statistics, Palestinian documents, court documents, Knesset transcripts, and interviews from leading officials, and much of the data is outdated, often well over a decade old. The omissions are even more egregious than the errors and misrepresentations, rendering HRW’s report as nothing more than propaganda.

In preparing this report, we examined and critically assessed every line of HRW’s publication and closely read the sources and citations provided. We divided the material into four categories: Errors, Misrepresentations, Omissions, and Double Standards. This systematic review conclusively shows, contrary to HRW’s claims, that the allegations of Israeli “apartheid” have no substance or merit. 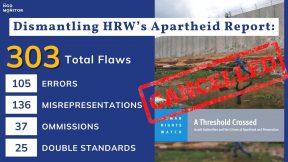 In February 2022, Amnesty released a 280-page report on Apartheid. As detailed in this report, the publication is fundamentally flawed, using lies, distortions, omissions, and egregious double standards to construct a fraudulent and libelous narrative of Israeli cruelty

On April 27, 2021, HRW will publish a report as part of a renewed NGO push over the past 18-months, attaching the term “apartheid” to discourse on Israel. The report adds to decades of HRW’s obsessively singling out of Jews and Israel, and rejection of the legitimacy of a Jewish nation state, per se and regardless of policies or borders