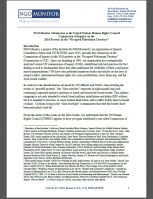 NGO Monitor, a project of the Institute for NGO Research,1 an organization in Special Consultative Status with UN ECOSOC since 2013, presents this submission to the Commission of Inquiry on the 2018 protests in the “Occupied Palestinian Territory” (Commission or COI). Since our founding in 2002, our organization has systematically analyzed various UN commissions of inquiry (COIs), identifying both best practices for fact finding as well as fundamental flaws that often undermine the credibility of their conclusions and recommendations.2 We have also published numerous books and articles on the laws of armed conflict, international human rights law, arms proliferation, terror financing, and the Arab-Israeli conflict.

In contrast to the disinformation advanced by UN officials and NGOs, characterizing the events as “peaceful protests,” the “Gaza marches” represent an eight-month long (and continuing) organized military operation to attack and breach the Israeli border. This military campaign is not only intended to attack Israeli military installations and abduct IDF soldiers, but it is intended to terrorize, to cause wanton destruction, and to inflict bodily harm to Israeli civilians. Civilians living in the “Gaza envelope” (communities that abut the border) have been particularly hard hit.

Given the nature of the events on the Gaza border, it is unfortunate that the UN Human Rights Council (UNHRC) appears to have yet again established a one-sided Commission of Inquiry targeting Israel, aimed at cementing false narratives about the Gaza operation. Under UNHRC auspices, past commissions have had a poor record in providing objective and constructive reports regarding Israel. In our many publications (selections listed in footnote 2), we have highlighted several concerns plaguing UNHRC commissions of inquiry and fact-finding missions (FFMs) relating to the Arab-Israeli conflict. These issues include biased mandates; lack of transparency; lack of IHL and military expertise; extensive reliance, without verification or corroboration, on claims made by highly politicized and terror linked- NGOs; faulty legal analysis; omission of relevant facts; and ignoring of Palestinian violations.

In light of this history, we urge the current COI to strictly implement best practices, and avoid and prevent yet another biased report without credibility. Doing so will enhance policy development and civilian protection and help improve the tarnished reputation of the UN Human Rights Council. We hope that our submission will make a valuable contribution to this effort.

Background on Members of UNHRC Commission of Inquiry into Gaza Riots

On July 25, 2018, the UN Human Rights Council appointed three individuals to serve as members of a Commission of Inquiry (COI) into what has been predetermined to be Israel’s “military assaults on the large-scale civilian protests” along the Gaza border.

Topics in this Submission