Lawfare Defeat for NGOs at ICC

The Office of the Prosecutor of the International Criminal Court decides that it does not have jurisdiction to begin an investigation over cases related to the 2008-09 Gaza War, rejecting NGO lobbying and echoing NGO Monitor's legal brief. 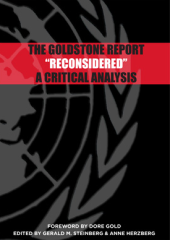 NGOs, soft power and demonization in the "lawfare" strategy

NGOs, the UN, and the Politics of Human Rights in the Arab-Israeli Conflict

Trocaires involvement in the Arab-Israeli conflict has focused on accusations of Israeli violations. Lobbies for sanctions against Israel, including suspending the EU-Israel Association Agreement, blocking Israels acceptance into the OECD, and "action"

In July 2010, Salil Shetty became the Secretary General of Amnesty International. His appointment follows a major decline in Amnesty's moral reputation and influence. NGO Monitor wrote to Shetty, asking him about the Gita Sahgal incident, Amnesty's bias in the Arab-Israeli conflict, the calls for an arms embargo against Israel, and the blog post of Amnesty-Finland's executive director referring to Israel as a "scum state."