Norway has joined Sweden, Denmark, Switzerland and the Netherlands in funding the Human Rights & International Humanitarian Law Secretariat, allocating to the framework NOK 5 million (over $600,000) in the second half of 2016. The HR/IHL Secretariat is an intermediary that distributes funds to non-governmental organizations (NGOs) active in BDS (boycott, divestment and sanctions) campaigns and other forms of demonization against Israel. It is managed by the Institute of Law at Birzeit University (IoL-BZU) in Ramallah and the NIRAS consulting firm, based in Sweden.

According to an internal report, 80% of the HR/IHL Secretariat’s distributions are allocated to core NGO funding. NGO Monitor research shows that out of 24 core recipients, 13 support BDS, receiving $5.78 million (more than half) out of an operating budget of $10.38 million over the course of four years. Some grantees have also promoted antisemitic rhetoric and have apparent links to the PFLP terrorist organization. Core group members receiving funding include BADIL, Al-Haq, Addameer, and MIFTAH, all vehemently anti-Israel NGOs at the forefront of BDS campaigns.

Norway’s decision to join the HR/IHL Secretariat on June 1, 2016 contrasts sharply with the criticism and debates in the Swiss and Dutch Parliaments regarding the donor framework. In June, the Dutch government passed a resolution calling for a review of its funding to the Secretariat due to its support of BDS. The Swiss Parliament is due to vote in its Fall session following a motion signed by 41 Members of Parliament questioning its funding to the Secretariat.

According to Prof. Gerald Steinberg, president of NGO Monitor, “The objectives stipulated in the Norwegian agreement — promoting gender equality, good governance and democratization — are entirely disconnected to the realities of the HR/IHL framework. None of these terms applies to the activities of BDS grantees, leaving major questions regarding the Norwegian government’s decision making process and the requirement for due diligence.” 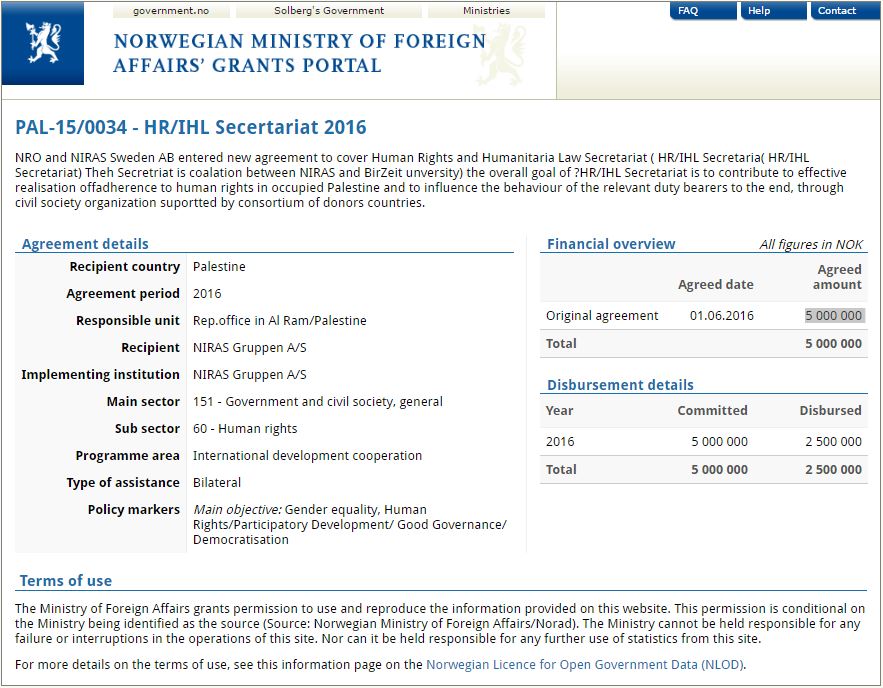 The Norwegian government is a major donor to the IHL Secretariat, which in turn funds NGOs that promote BDS and demonization campaigns against Israel.