On May 5, 2010, the Palestinian “right of return” NGO known as BADIL announced the winners of its 2010 “Al-Awda Awards” at ceremonies in Ramallah and Gaza. Second place in the “Best Caricature” category and $600 were awarded to a blatantly antisemitic cartoon, featuring a grotesque caricature of a Jewish man standing over a dead Arab child and holding a pitchfork dripping with blood. 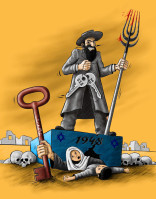 BADIL’s funders include a number of European governments and church groups, including Trócaire and DanChurchAid (DCA), even though this type of incitement violates the European Union Agency for Fundamental Rights’ antisemitism guidelines. The guidelines explicitly refer to the employment of “sinister stereotypes and negative character traits,” as well as the use of “the symbols and images associated with classic antisemitism (e.g., claims of Jews killing Jesus or blood libel) to characterize Israel or Israelis.”

BADIL’s caricature features a stereotypical representation of a Jewish man in traditional Hasidic attire, with sidelocks and a hooked nose. Reflecting blood libel accusations, he has a menacing grin, and is surrounded by dead and dying Arab children and skulls. He is standing on a platform with “1948” on it, and the symbol of the State of Israel (Star of David), labeling the establishment of Israel as murderous and evil.

The offensive cartoon was displayed at an exhibition in Ramallah, and then published on BADIL’s website. In August, NGO Monitor included reference to this cartoon in correspondence with DCA, one of BADIL’s partners, and the image was removed from parts of the website; following further correspondence on this matter, by October it had been completely removed and was replaced with a disclaimer: “This cartoon does not meet BADIL standards, and measures have been taken in order to ensure that future winning entries to the Awda-Award will comply with these standards.” There is no indication that the award was withdrawn from the producer of the cartoon.

BADIL’s funding is entirely non-transparent. Independent research reveals that BADIL received $100,000 via the NDC (joint funding of Switzerland, Sweden, Denmark, Netherlands) in 2008-9. BADIL has also received funding from DanChurchAid  (DCA) and Trócaire (the Irish Catholic Church’s humanitarian aid organization that receives most of its funding from the Irish government).

(NGO Monitor requested information from DCA and Swiss Aid regarding their funding for BADIL, but did not receive a response at publication time.)

The larger framework of BADIL’s ideology is premised on promoting a so-called Palestinian “right of return,” and rejecting Israel as a Jewish state. BADIL’s website describes the establishment of the State of Israel as follows: “Forced displacement which created the refugee issue, has been yet another dimension of the Zionist project to establish the state of Israel as a racist colonial entity” (emphasis added). Like the cartoon, this rhetoric is a political variant of antisemitism, as defined by the EU Agency for Fundamental Rights: “Denying the Jewish people their right to self-determination, e.g., by claiming that the existence of a State of Israel is a racist endeavor.”

BADIL is a leader in the global BDS (boycotts, divestment, and sanctions) campaign, featuring a “BDS campaign update” on its website.  In 2007, BADIL published a strategy document aimed at antagonizing Jews, advocating efforts to “[e]nlist journalists to organize a targeted campaign to expose the lies of AIPAC and the Anti-Defamation League and to expose the Jewish and Zionist community’s double standards regarding Nakba & Occupation.”

BADIL is similarly involved in lawfare attempts to prosecute Israeli military officials in international and European courts, and has accused Israel of “genocide” and “slow genocide.” Another focus is submitting condemnatory written and oral statements to the UN Human Rights Council.

One of BADIL’s most prominent supporters and funders is DanChurchAid (DCA), a major Danish “faith-based and ecumenical, non-missionary organisation rooted in the Danish National Evangelical Lutheran Church.” In a 2006 evaluation of BADIL, conducted by DCA and Trócaire, BADIL was praised for its “important role in the coordination and launching of the BDS campaign.”

On August 25, 2010 NGO Monitor wrote to DCA officials, asking whether they were familiar with the cartoon and whether DCA had funded the contest. DCA claimed that they did not fund the Al-Awda Awards, and were unaware of the cartoon. The regional DCA representative, however, agreed that the cartoon was antisemitic, but attributed “this unfortunate incident” to “a misjudgment or error on behalf of Badil management.”(Click here to read the full correspondence.)

NGO Monitor also raised the problem of DCA support for radical NGOs that obstruct peace efforts and reject a “two-state” solution, such as BADIL, in a September 14, 2010 op-ed in the Danish-language Berlingske Tidende.. In a follow-up article (September 23), NGO Monitor showed how BADIL’s antisemitic cartoon was an example of the immorality of some of DanChurchAid’s partnerships.

BADIL Director Ingrid Jaradat Gassner responded (September 25) by calling on “the populations and governments in Europe” to “support the BDS Campaign because it advocates a just peace” (translation by NGO Monitor).  She also alleged that “For decades, Israel has stolen and colonized Palestinian land, displaced millions of our people and imprisoned, tortured, wounded , maimed and killed hundreds of thousands of Palestinians.” Gassner completely ignored the cartoon and did not deny that it was antisemitic.

DCA General Director Henrik Stubjkaer also replied to NGO Monitor’s analysis. He affirmed that BADIL’s cartoon is antisemetic, but also reiterated that DCA considers the partnership with BADIL “important” because DCA was able to “call BADIL and criticize the poster, which was then removed. In our opinion, such a dialogue also contributes to peace” (translation by NGO Monitor).

In contrast to peace and compromise, BADIL’s political agenda focuses on extensive advocacy for a Palestinian “right of return,” rejection of normalization with Israel, and demonization of Israel as a “racist state.” As demonstrated by the highly offensive cartoon, which won an award as part of a “mobilization” campaign for commemorating the “Nakba” (catastrophe) of 1948, this agenda is rooted in an antisemitic ideology, manifested in classic and modern forms, that precludes and vilifies Israel and Jews.

By funding and supporting BADIL’s activities, NGOs such as DanChurchAid and Trocaire are facilitating incitement, including classic antisemitic themes. It is immoral to partner with an organization that rewards blatant antisemitism and uses highly offensive images as part of its anti-Israel campaigns.

The governments and taxpayers of Denmark and Ireland, respectively, which heavily fund these organizations, are also implicated. This example further highlights the need for an independent and systematic examination of all funding for political advocacy NGOs active in the Palestinian-Israeli conflict.