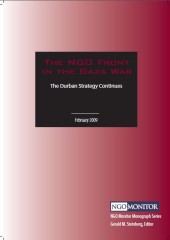 On February 4, 2009, NGO Monitor released a detailed report — The NGO Front in the Gaza War: The Durban Strategy Continues — analyzing NGO activity during the Gaza war (December 27, 2008 – January 18, 2009). This monograph is an expansion of NGO Monitor’s coverage of the conflict.

NGOs and the Exploitation of International Law

This summary is available as a PDF. To read the PDF of the Executive Summary in Hebrew, click here.

Throughout Israel’s operation in Gaza, from December 27, 2008 to January 18, 2009, and in its immediate aftermath, over 50 NGOs claiming to promote human rights and humanitarian agendas issued more than 500 statements on the fighting. These statements exhibit severe bias and double standards, focus overwhelmingly on condemning Israel, and ignore or give minimal attention to Israeli human rights and casualties. Under the façade of morality and universality, they exploit international legal terminology and erase Hamas’ violations of international humanitarian law, such as the “reckless and cynical use of civilian installations.” [1]

This vilification and delegitimization of Israeli anti-terror tactics is part of the “Durban Strategy,” crystallized at the NGO Forum of the UN’s 2001 World Conference Against Racism in Durban, a process of attempting to isolate Israel internationally to achieve Palestinian political goals. Since the conference, the NGO network has applied the Durban Strategy repeatedly: in promoting the myth of the Jenin “massacre” (2002); campaigns against Israel’s West Bank security barrier (2004); the attempt to impose an academic boycott on Israel (2005); the church-based anti-Israel divestment campaigns (2006); and the 2006 Israel-Hezbollah war in Lebanon. [2]

From late 2007 to December 2008, the focus of the Durban Strategy was on condemning Israel’s policy regarding Hamas-controlled Gaza. Numerous NGOs active in the Arab-Israeli conflict issued reports, press releases, and “urgent calls” in condemnation of Israel (over 300 statements in 2008 alone). In general, these documents misrepresent international humanitarian law by labeling the policy “collective punishment,” and largely parrot a PLO “legal opinion” claiming that Israel remains responsible for the welfare of the population in Gaza. [3]

A wide range of groups were responsible for implementing the Durban Strategy during the Gaza conflict: international “superpowers” – including Amnesty, Human Rights Watch (HRW), and Oxfam; Israeli NGO, B’Tselem; Israeli-Arab organizations, Adalah, Ittijah, and Mossawa; and Palestinian NGOs in Gaza, PCHR and Al Mezan. Under the cover of the “halo effect” – where NGOs’ human rights claims are accepted without question by virtue of their self-stated humanitarian mandates – these organizations accused Israel of “war crimes,” “disproportionate” and “indiscriminate” attacks, and “targeting civilians.”

This was accompanied by campaigns, also under the guise of universal human rights, to criminalize legitimate forms of self-defense, weaponry, and warfare. According to these re-definitions of international humanitarian law, if Hamas fights from and hides within the civilian population of Gaza, a military response by Israel would be impossible and illegal.

These NGOs publicized their claims despite not having access to Gaza to conduct their allegedly “independent, impartial investigations,” and relied on Palestinian “eyewitnesses,” whose testimony, objectivity, and even identity could not be verified or corroborated. As opposed to objective reports on the human rights situation, the Palestinian groups in Gaza promoted the Palestinian narrative in their political attacks on Israel. Moreover, the NGOs are unqualified to evaluate whether Israeli strikes were “disproportionate” and “indiscriminate”: they do not possess the necessary military expertise and detailed information on the dispersal of weapons by Hamas, and they are not privy to Israeli targeting decisions.

The implementation of the Durban Strategy in the Gaza war can be summarized under three headings: the exploitation of international humanitarian law, threats of “lawfare,” and delegitimizing Israel in the media and at international forums.

First, the exploitation of international legal rhetoric is a major weapon in the political war to delegitimize Israeli anti-terror operations.  The terminology of international humanitarian (IHL) and human rights law is selectively applied to charge Israel with “violations of law,” “crimes against humanity,” “war crimes,” “disproportionate force” and “indiscriminate attacks.” NGOs use the legal language to increase the credibility and seriousness of the charges, and, according to Washington attorneys David Rivkin and Lee Casey, to “criminaliz[e] traditional warfare,” rather than promote universal human rights.  [4] In one case, Israel’s “guilt” and “responsibility” were pre-decided: even before the first strikes of the operation, several NGOs including Oxfam and CARE International, released a statement that “called on the international community to speak out against the disproportionate use of force by any side.” [5]

Second, calls for “war crimes” investigations and trials are part of the NGO anti-Israel “lawfare” strategy, to harass Israeli officials with civil lawsuits and criminal proceedings and to promote a negative media image of Israel. [6]  The Palestinian Center for Human Rights is leading the Gaza lawfare attacks. Other NGOs calling for lawfare include the Alternative Information Center, Adalah, Amnesty International, Ittijah, and the Arab Association for Human Rights. Rather than obtaining “justice” for victims, these cases are intended to punish Israel for its anti-terror methods, to prevent future operations, to interfere with Israel’s diplomatic relations, and to advance boycotts and other aspects of the Durban Strategy. Although the vast majority of previous lawfare cases have been dismissed, the damage to the legitimacy of Israel’s self defense is considerable.

Third, at the UN Human Rights Council Ninth Special Session to address “the grave violations of human rights in the Occupied Palestinian Territory including the recent aggression in the occupied Gaza Strip” (January 9-12, 2009), [7]  NGOs such as PCHR, FIDH, MRAP, Union of Arab Jurists, EAFORD, and Nord-Sud XXI used demonizing language in their attacks, accusing Israel of “massacres” “apartheid” and “racism” rhetoric, “genocide,” and “first class war crimes against Palestinian civilians.”

This appears to be a prelude to NGO activity at the Durban Review Conference scheduled for April 20-24, 2009, and mirrors how pro-Palestinian activists at the 2001 Durban conference used the so-called “Second Intifada,” including images of 12-year old Muhammad al Dura who was allegedly killed by Israeli soldiers, to represent Palestinian suffering and resistance. Indeed, at a January 20, 2009 Intersessional Working Group meeting, Badil, a Palestinian NGO that promotes the “Right of Return,” reportedly introduced the “atrocities taking place in Gaza” in an attempt to include the Palestinian people on a “list of victims of racial discrimination.”

Such highly biased and politicized NGO campaigns prevent any genuine assessment of Israel’s human rights record and erode the moral foundation and universality of human rights.

[5] “Aid agencies warn of humanitarian catastrophe if Gaza is attacked,” December 28, 2008. Available at http://alertnet.org/thenews/fromthefield/217440/50d54fb73b647865c4d50628b3748274.htm.  Although the statement was not published online until after the war began, it was released on December 27 and clearly was composed before the outbreak of violence.