On May 29, 2017, European Union (EU) Ambassador to Israel Lars Faaborg-Andersen responded to questions via a live chat on Facebook. Many users posted questions concerning EU funding to non-governmental organizations (NGOs) that promote anti-Israel agendas and/or support BDS (boycott, divestment, and sanctions) against Israel. NGO Monitor posted a question about a Palestinian NGO that promotes violence, but was funded to raise awareness of “EU core values.” 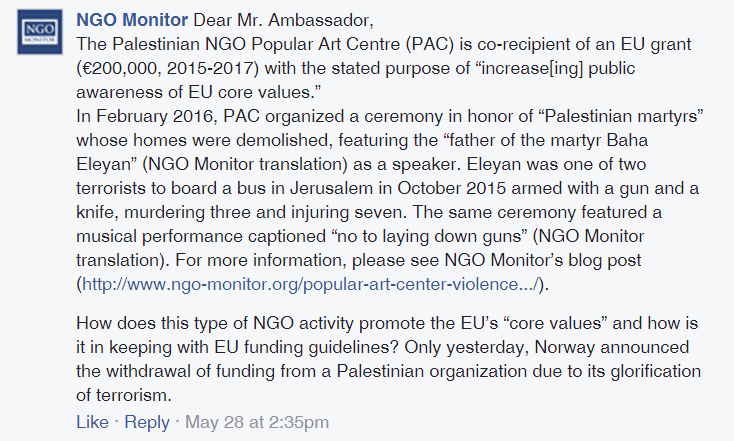 While the Ambassador did not respond specifically to NGO Monitor’s question, he addressed the general issue of funding to NGOs, claiming that “the European Union is not funding BDS supporters,” and that the EU supports “various NGOs and civil society organizations that are engaged in important activities that are part and parcel of the cooperation between Israel and the European Union, including the issue of promoting human rights” (12:19). The Ambassador concluded that “none of the organizations that we are supporting here or funding are illegal organizations or organizations that are not registered with the Israeli authorities, so I fail to see what criticism really can be launched against the EU on this particular issue.”

However, in referring only to Israeli NGOs, the Ambassador fails to address the EU’s significant financial support of several European and Palestinian NGOs that, contrary to the Ambassador’s statement, support anti-Israel BDS campaigns, incite to violence, justify terrorism, and/or promote antisemitism.

NGO Monitor reviewed a number of EU regional funding programs designated for Israel, the West Bank, and Gaza, and found that 29 out of 100 EU grants administered through these frameworks distribute funds to organizations that support BDS campaigns against Israel (€16.7 million out of €67.1 million – roughly 25%). 42 out of 180 EU grantees in total support BDS – either through participation in activities and events, signing of petitions and initiatives, and/or membership in explicit BDS platforms.

One of these organizations, Popular Art Center (PAC), is the co-beneficiary of a €200,000 “Cultural Diplomacy” grant (2015-2017), with a stated purpose to “increase public awareness of EU core values.” In February 2016, PAC organized a ceremony in honor of “Palestinian martyrs” whose homes were demolished, featuring the “father of the martyr Baha Eleyan” (NGO Monitor translation) as a speaker. Eleyan was one of two terrorists to board a bus in Jerusalem in October 2015 armed with a gun and a knife, murdering three and injuring seven. The same ceremony featured a musical performance captioned “no to laying down guns” (NGO Monitor translation). PAC was also a co-beneficiary of an EU Cultural Programme grant, “Performing Arts: A Pathway Towards Self Expression and Democracy” (€965,970, 2014-2016).