On August 22-26, 2018, “The solidary and rebellious summer university of citizens and social movements” will take place in Grenoble, France. The summer institute is organized by 70 organizations, including many that support politicized anti-Israeli campaigns against Israel such as BDS France, Platform of French NGOs for Palestine (PFP), Association France Palestine Solidarité (AFPS), CCFD-Terre Solidaire, la Ligue des droits de l’Homme (LDH), and Oxfam France.

This event, which is funded by France’s Agency for Development (AFD) and the Grenoble municipality, will focus on “the creation of activists and new audiences” and the “convergence of organizations.”

Participants will take part in dozens of workshops such as “Done with the European Union! But how and what else?,” “How to investigate multinationals?,” “What are the responses of social movements to the authoritarian and neoliberal powers in place?,” “Free trade in Africa, an economic neo-colonialist construct,” “How to resist creatively? Action and civil disobedience training,” and “Rethinking governmental assistance to development – In order to achieve the decolonization of North-South solidarity, rethink development aid by focusing on the achievements / successes of South-South cooperation.”

In addition, during the five-day institute, the program will feature several anti-Israel workshops promoting BDS (boycott, divestment, and sanctions) campaigns against Israel, despite the fact boycotts are illegal in France. BDS workshops include: 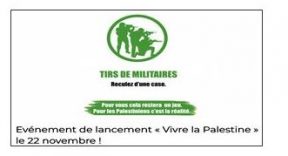