The evidence provided by NGO Monitor clearly demonstrates that as Executive Director of Human Rights Watch (HRW) from 1993-2022, Roth transformed HRW into a platform for tendentious targeting of Israel, systematically distorting international law, the laws of armed conflict, and responses to terrorism. Efforts to isolate the Jewish state through false allegations of “war crimes”, “collective punishment” and “apartheid” were central to HRW’s agenda.

In 2009, HRW founder Robert Bernstein, writing in the New York Times, condemned the NGO for helping “to turn Israel into a pariah state.” 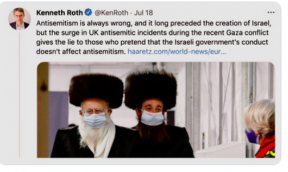 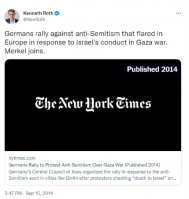 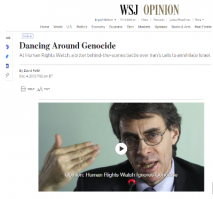 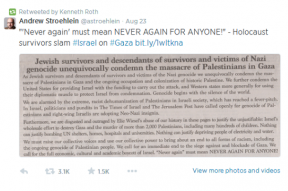 In his 29-year reign as head of HRW, Ken Roth has obsessively distorted and exploited human rights to demonize Israel. His language reflects a deeply personal hostility to Judaism and Jewish self-determination, and in applying double standards, Roth has caused major damage to the principles embodied in the Universal Declaration of Human Rights.

HRW director Ken Roths obsessive targeting of Israel during the Gaza war highlights his lack of credibility and personal animus towards the Jewish state.