On November 21, NGO Monitor sent a letter to High Representative of the EU for Foreign Affairs and Security Policy/Vice-President of the EU Commission regarding his usage of DCI-P as a credible source.

To: The Honorable Josep Borrell Fontelles

HRVP of the European Commission

In your November 18 response to a parliamentary question submitted by Belgian MEP Marc Botenga (The Left), you cited the Palestinian NGO Defense for Children International-Palestine (DCI-P) regarding the deaths of Palestinian teens in 2022.  We are writing to inform you that DCI-P is not a valid source, both due to its links to an EU-designated terrorist organization, and to its false reports.

In October 2021, Israel designated1 DCI-P as a terrorist entity over its ties to the Popular Front for the Liberation of Palestine (PFLP), reinforcing the detailed and independently verifiable open source evidence. In 2018, Citibank and Arab Bank closed DCI-P accounts and the online donation platform Global Giving stopped providing services following terror-financing concerns.

As the record clearly demonstrates, in its accusations, DCI-P regularly ignores or minimizes violent attacks perpetrated by Palestinian teenagers. Similarly, the NGO rarely acknowledges that many of these Palestinian teens are affiliated with designated terrorist organizations – in blatant violation of the international legal prohibition on the “recruitment and use” of children by armed groups and a clear violation of their human rights.

In erasing this essential context, DCI-P seeks to criminalize Israeli self-defense measures intended to protect the lives of Israeli civilians and personnel. The murder of three Israeli civilians by 18 year-old Muhammed Soof in a November 15 stabbing spree underscores the phenomenon of Palestinian teenagers launching terror attacks.

As documented by NGO Monitor, these distortions not only appear in DCI-P publications, but the NGO contributes to and shapes UNICEF’s distorted reporting and data – also cited in your November 18 response.

DCI-P claims that 53 Palestinian minors have been killed in the West Bank and Gaza in 2022. NGO Monitor’s analysis found that 36 of them were killed by Israeli forces while engaging in acts of violence, including attempting stabbings, and hurling explosives, Molotov cocktails or stones at Israeli civilians and security personnel. Moreover, at least fourteen of them were affiliated with EU-designated terrorist organizations, including Hamas, Palestinian Islamic Jihad (PIJ), PFLP and Fatah’s Al-Aqsa Martyr’s Brigades, while at least thirteen others were affiliated with other Palestinian factions. A review of social media also highlights abundant evidence of many of these teenagers carrying automatic weapons and ammunition (see annex below).

For instance, NGO Monitor research has revealed several such photos of Odai Salah, referenced by MEP Botenga in his original question, but from which this fundamental fact was erased. 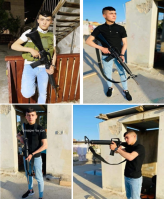 We call on European Commission officials to better vet the organizations they rely on regarding such important issues, and to ensure that EC policy reflects objective fact-based analysis, and not the politicized advocacy of a terror-linked NGO actor.

We look forward to your response.