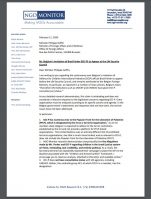 I am writing to you regarding the controversy over Belgium’s invitation of Defence for Children International Palestine (DCIP) official Brad Parker to appear before the UN Security Council, and remarks attributed to the Belgian Foreign Ministry. In particular, as reported in a number of news articles, Belgium notes “that other UN institutions such as UNICEF and UNESCO have given DCI-P consultive (sic) status.”1

As our detailed research demonstrates, this claim is misleading and does not constitute a relevant response to the legitimate concerns regarding DCI-P. Every organization must be analyzed according to its specific actions and agenda. In the Belgian government’s statements and responses that we have seen, the central issues have not been addressed.

Given DCI-P’s links to the PFLP terrorist organization and its distortions regarding Children and Armed Conflict, it is my expert opinion that failure to rescind the invitation to Mr. Parker will discredit Belgium and the UN Security Council. I urge you to reconsider.

My staff is available to you for further clarifications regarding DCI-P and on other NGOs related to the conflict.