A major element of NGO propaganda consists of accusing Israel of targeting and killing civilians in Gaza. NGO Monitor has examined the use of this subterfuge during the May 2021 Gaza conflict, as well as in previous confrontations. One method used by NGOs to inflate civilian casualty numbers, accompanied by allegations of “war crimes,” is to obscure or omit essential details about specific incidents – thereby erasing the role of terrorist groups. NGOs falsely classify Palestinian terrorists as civilians and ignore evidence that implicates terror groups in the deaths of Gazan civilians. NGO Monitor research has identified 50 incidents in which Hamas and Islamic Jihad operatives killed in Gaza were falsely labeled by NGOs as civilian casualties, or in which civilians killed by Hamas were implicitly attributed to Israel. (Approximately 15 percent of the 4,300 missiles fired towards Israel fell short and impacted in Gaza.) In failing to report accurately, Palestinian NGOs amplify the demonization strategy, ignore the commission of war crimes by Palestinians, and distort the reality of Israeli efforts to limit civilian casualties during the fighting. These manipulated NGO accounts also serve as the basis of inflammatory media projects, such as the infamous New York Times front page story with pictures of children, and for international “investigations”, such as a forthcoming UN Human Rights Council commission of inquiry. To choose an incident, click on a circle next to a particular date and time.

Similarly, Al Mezan reported that two “residents of Jabalia” were killed in an Israeli air raid on farmland east of Jabalia. Additionally, Al Haq claims that the two were killed “as they worked their agricultural fields in the Jabal Al-Kashef area, east of Izbt Abd Rabbo.” Omission of Hamas ties: According to Hamas, Suliman was a field commander in the Izz Ad-Din Al-Qassam Brigades. Photographs have been published of Mohammed (15) dressed in military clothing carrying automatic weapons.  A video of Suliman instructing his son in the use of automatic weapons is revealing, and indicates that the son was a victim of the crime of child recruitment. 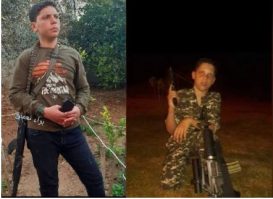 Notably, the reported Israeli strike occurred at the very beginning of hostilities, just 10 minutes after Hamas launched a rocket barrage toward Jerusalem. This timing – when Israel was responding narrowly to the initial attack and had yet to widely strike targets throughout Gaza – combined with the location of the incident in an isolated area reflects a precision strike on individuals engaged in military activity.

PCHR reported that the area where Kalloua was killed contained a military site belonging to “Palestinian armed groups,” adjacent to a municipal park.  Its Arabic language report also refers to Kallousa as a civilian. Omission of Hamas ties: According to Hamas, Kallousa was a combatant in the Izz al-Din Qassam Brigades. Neither NGO explained why a military installation was located next to a municipal park, or why Kallousa, a confirmed Hamas member, happened to be “passing by” at that precise moment.

Al Haq reported that the Al-Mansi house was targeted “as residents tried to leave the house.” Al Mezan reported that the three were killed when a missile was “fired at a front yard next to a mosque.” According to PCHR, “3 civilians, including 2 brothers, were killed.” (emphasis added). Omission of Hamas ties: According to Hamas, Ahmed Mansi and Ahmed Mohammed Sabah were both combatants in the Izz ad-Din al-Qassam Brigades, while the Hamas Ministry of the Interior referred to Yousuf Mansi as a “soldier.” Notably, Al-Mezan’s claim that munitions were “fired at a front yard next to a mosque,” further suggests that Hamas members were exploiting civilian objects to shield their military activity.

In addition, NGO Monitor checked incidents involving Palestinian casualties that were caused by Palestinian rockets. There is no correlation between the incidents listed below and in Table 1 and the ones mentioned above in the database.

PCHR and Al Haq both reported that “a missile” killed the civilians, while Al Mezan originally reported that the incident was an airstrike, later revising to say instead that the casualties were the result of a “shell” hitting the house. Omission of Hamas role: The significant discrepancies in NGO reporting regarding the incident, combined with Al-Mezan’s correction and DCI-P’s cautious language, strongly suggest that these casualties were the result of Palestinian weapons that fell short and landed in Gaza. In many other reports, these NGOs consistently and regularly attributed attacks to the IDF.  The lack of such attribution in this instance is conspicuous.

Similarly, Human Rights Watch (HRW), claimed that “a guided missile struck near the town of Beit Hanoun and killed 8 people, including 6 children, all apparently civilians, and reportedly injured 18.”

PCHR and Al Haq both reported that Buthaina Mahmoud ‘Issa ‘Obaid (6) was killed after being hit with shrapnel in the right side of her head when she was in front of her house. DCI-P acknowledged that it was not yet able to confirm the source of the rocket-propelled grenade. Omission of Hamas role: None of the NGOs reported the origin of the alleged rocket-propelled grenade. Moreover, RPGs are typically used for low to mid-range targets by infantry, there was no known Israeli ground incursion into Gaza, and these weapons are not a regular part of the IDF arsenal. These factors suggest that this incident is the result of Palestinian munitions: Either one of the RPGs fired by Palestinians towards Israel misfired, or an Israeli strike on a weapons cache led to secondary explosions.

Al Haq and PCHR both reported that the circumstances of the incident were still under investigation, but “coincided with the firing and interception of homemade Palestinian rockets from the Israeli Iron Dome system, and the firing of Israeli artillery shells.” Omission of Hamas role: Al-Haq’s and PCHR’s explanations are inconsistent with Iron Dome’s capabilities and deployment in intercepting rockets, which could not conceivably have intercepted a rocket over Rafah. Furthermore, as noted above, Al-Mezan’s statement demonstrates that while Israeli attacks are clearly labeled as “Israeli” in its reports, the attacker is not mentioned when Palestinian rockets cause fatalities – a recurring theme throughout NGO reporting on the conflict.