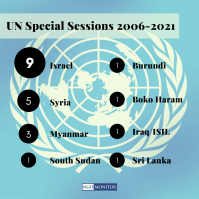 On May 27, 2021, the UN Human Rights Council (UNHRC) convened a special session on Israel (since 2006, the Council called 9 special sessions focusing on Israel, out of 30 total, and more than on any other topic). The Council was to discuss “violations” allegedly committed by Israel since April 13, 2021 (relating to Sheikh Jarrah, Gaza, Temple Mount and Al-Aqsa Mosque, and mixed Israeli cities), to “place responsibilities on all business enterprises to respect human rights” by updating the update the discriminatory UN database of businesses operating across the 1949 Armistice line, and to establish a permanent Commission of Inquiry to investigate “all underlying root causes” of “recurrent tensions, instability & protraction of conflict including systematic discrimination and repression based on national, ethnic, racial or religious identity.” Resolution [A/HRC/S-30/L.1] passed 24 Yes, 9 No, and 14 abstentions.

During the session, numerous non-governmental organizations (NGOs) condemned Israel for allegedly committing “war crimes” and accused Israel of committing “crimes against humanity,” acting with “impunity,” and pursuing “colonial” policies; NGOs also called for sanctions and an arms embargo against Israel. Reflecting the intensification of the NGO “apartheid” campaign to advance a narrative of unparalleled Israeli immorality and to promote demonization through BDS and lawfare, this term was used repeatedly (read NGO Monitor’s report “NGOs Intensify Apartheid Demonization Campaign”).

In the past 18-months, at least 15 political NGOs involved in anti-Israel advocacy, as well as their UN allies, have issued publications accusing Israel of “apartheid.” This offensive term is used to advance a narrative of unparalleled Israeli immorality, and to promote demonization through BDS and lawfare, including in the International Criminal Court (ICC).