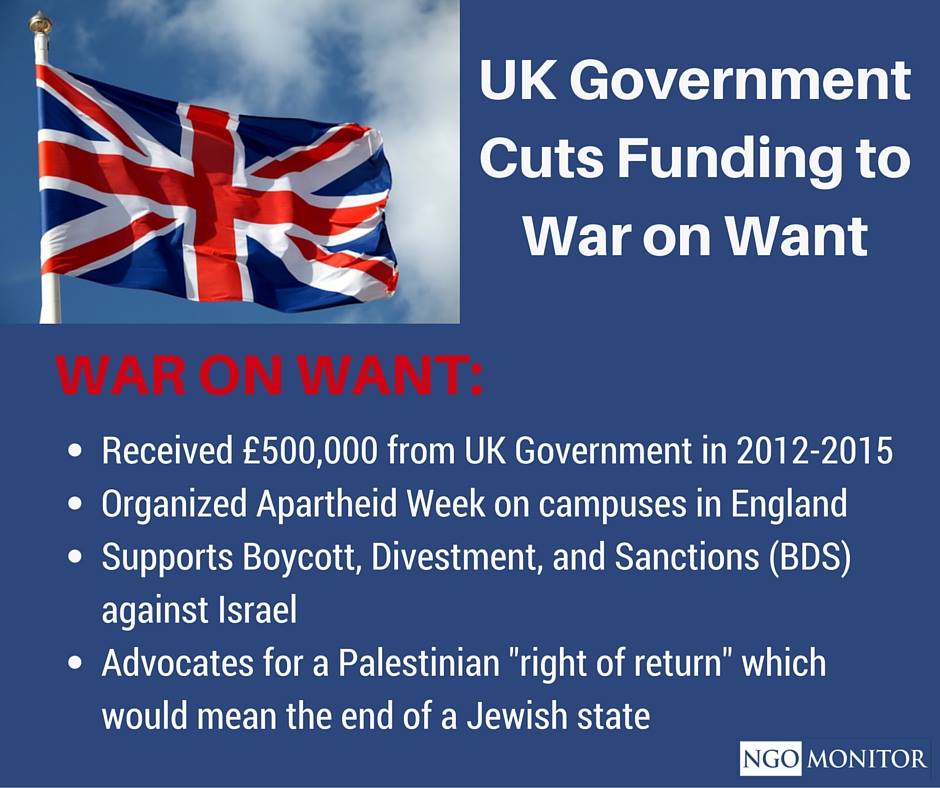 Jerusalem – The end of UK government funding for a radical anti-Israel group and accompanying disclosures of antisemitism at its events highlight the urgent need for due diligence, transparency and accountability in all NGO funding frameworks, stated NGO Monitor. According to media reports, War on Want, which is leader of boycott campaigns against Israel and companies that do business with the Jewish state, is no longer being funded by the British government.

“This is an important, albeit belated, step by the British government,” said Prof. Gerald Steinberg, president of NGO Monitor. “Other institutional donors, in particular the European Union, should follow suit and immediately end their funding for this anti-human right organization.”

NGO Monitor research shows that the British government, via the Department of International Development, had provided War on Want with almost £500,000 in 2012-2015. The EU provided an additional £211,000.

For more than a decade, NGO Monitor has been tracking the crude anti-Israel campaigns of War on Want, in direct violation of requirements for a UK-registered charity. Documentation containing such information was submitted to the DFID and presented to Members of Parliament.

“Governments should not be funding hate, nor should they support NGOs that contradict and undermine their policy goals.” continued Prof. Steinberg. “Unfortunately, the British government has other NGO problems to address.”

In addition to War on Want, the British government funds Irish Catholic aid organization Trócaire – which campaigns for economic sanctions against Israel and partners with Palestinian NGOs such as BADIL and Palestinian Centre for Human Rights (PCHR) – both of which accuse Israel of “ethnic cleansing” and “apartheid.” Another NGO funded by the British government is the Norwegian Refugee Council (NRC), which promotes “lawfare” campaigns against Israel.

See NGO Monitor’s website for more on War on Want.