On Thursday, July 6, 2017, the European Parliament’s European Delegation for Relations with Palestine (D-PAL) will host members of the terror-linked organization Addameer. According to Palestinian sources, Addameer is an official “affiliate” of the Popular Front for the Liberation of Palestine (PFLP), a terrorist group banned by the EU, US, Canada, and Israel. The organization is a leader of campaigns in support of Palestinian prisoners convicted of security offenses, referring to them as “political prisoners” and altogether omitting the context of violence and terror.

Addameer counts several PFLP members and affiliates within its ranks. Addameer’s vice chair, Khalida Jarrar, was arrested earlier this week, on July 2, on charges of incitement to terrorism. Jarrar was arrested and served a six-month prison term on similar charges in 2015-2016.

Also scheduled to speak at the EU Parliament event is Addameer’s director Sahar Francis, who has made statements supportive of BDS (boycott, divestment, and sanctions) campaigns against Israel. Likewise, under her leadership, the organization is involved in numerous BDS activities.

The PFLP is a Marxist-Leninist Palestinian terror group founded in 1967 by George Habash. It is infamous for pioneering armed aircraft hijackings in the late 1960s and early 1970s, and has also carried out suicide bombings and many other attacks against civilians. 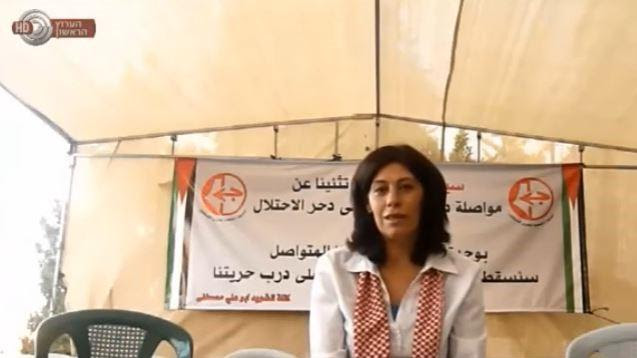 Khalida Jarrar speaking on behalf of Addameer in front of a PFLP banner. (Screenshot, Israel Channel 1)