On June 21, 2020, the Palestinian NGO Network (PNGO) reported that Defense for Children International-Palestine (DCI-P) had elected a new board. Individuals who celebrated convicted terrorists, posted violent images, and made antisemitic statements (per the International Holocaust Remembrance Alliance [IHRA] working definition of antisemitism) were appointed, including to the important position of treasurer.1

The composition of the new board demonstrates that the organization continues to embody and promote values that are entirely inconsistent with the ostensible mission of human rights and work with Palestinian minors. This raises serious concerns about the messages of incitement they communicate to Palestinian youth, and recruitment to and use of minors in terror activity.

The new members are in addition to the at least 12 current and former DCI-P officials, board members, and employees with ties to the Popular Front for the Liberation of Palestine (PFLP) – designated as a terrorist organization by the US, EU, Canada, and Israel.  Notably, as a result of such ties, on June 26, 2018, UK Lawyers for Israel (UKLFI) announced that Citibank and Arab Bank PLC “no longer provide banking services” to DCI-P. Global Giving, a US-based crowdfunding resource, also removed DCI-P from its website.

The troubling rhetoric and connections reinforce the important questions regarding continued European- and UN-supported partnerships with DCI-P, including UNICEF’s NGO Working Group.

Yaser Amouri was appointed Treasurer. He has posted in support of terrorists who attacked Israeli civilians and police officers:

Amouri has also glorified leaders of other terrorist organizations:

Adla Nazer was appointed Secretary. She has used Facebook to honor terrorists and promote violent rhetoric: 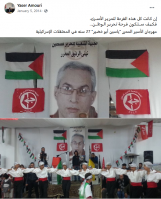 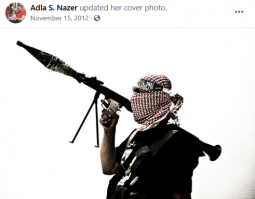