Civil society organizations (CSOs) are considered important actors in the implementation of international humanitarian assistance and development aid, with local non-governmental organizations (NGOs) seen as on-the-ground issue experts and thus relied upon by foreign governments to implement policies and projects abroad. According to the 2018 Global Humanitarian Assistance Report, 20% of international aid (amounting to $4 billion) was distributed to CSOs, with a majority going to international NGOs and 2.7% to local NGOs.1  Most of the money for local NGOs is distributed via UN agencies and international NGOs.

There are, however, a number of shortcomings in relying on NGOs for this purpose – primarily a lack of accountability, transparency, and oversight. In December 2018 and January 2019, the EU published two reviews of its funding to NGOs, with both concluding that proper accountability is largely lacking.2 The reports encourage donor governments to establish nationally-based monitoring mechanisms that are independent of both donors and beneficiaries. Such mechanisms would provide democratic ownership and accountability within a legal framework and would provide meaningful auditing of donors and beneficiaries.

Germany is a global leader in providing development aid (referred to as “cooperation” in Germany) and was the second largest bilateral donor in 2017 (after the US), at $24.7 billion in official development assistance.3 At the same time, however, Germany has the least transparent development aid system among major aid donors. German citizens appear to recognize this problem, and according to a 2018 public opinion poll conducted by the German Institute for Development Evaluation (DEval), “about 25% consider [German] development cooperation to be ineffective…citizens assume that about 50% of the money is lost through corruption.”4 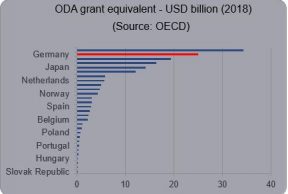 In 2011, Germany altered its foreign aid policy, changing it from “development aid” to “development cooperation,” in an effort to emphasize collaboration with partners. This change also led to the establishment of new instruments, with a focus on peacebuilding and peacekeeping. Within Germany’s Federal Ministry for Economic Cooperation and Development (BMZ), new funding and implementing instruments were created, including the German Corporation for International Cooperation (GIZ) and the Engagement Global (EG) (see below).

Currently, BMZ and the Ministry for Foreign Affairs (AA) are the primary federal authorities responsible for managing German development policy. This ministries are, however, only responsible for the political aspects of international aid, with the actual implementation of projects being outsourced to state-owned limited liability companies (GmbH) and NGOs. This decentralized system makes it nearly impossible to follow the flow of taxpayer money, or to provide the oversight necessary to prevent diversion of aid to counterproductive partnerships, including with groups that promote antisemitic activities, as defined by the International Holocaust Remembrance Alliance’s (IHRA) definition of antisemitism. 5 6

Specifically, BMZ lists 34 groups involved in Germany’s development cooperation policy, including NGOs, political foundations, and church aid organizations, among others. 7Individual ministries, agencies, and NGOs publish some information about the projects for which they receive funding, but the available data are often randomly reported, incomplete, and/or out of date, and only made publicly available on a voluntary, and not systematic, basis.

Furthermore, the involvement of advocacy-based civil society organizations in government-level policymaking and implementation in Germany is unique, both in its extent and its nature. Through the multiple mechanisms, actors with often divisive political agendas are granted millions of euros by the federal government, which are then redistributed to local civil society groups around the world. NGOs, foundations, and other government-funded institutions that often take the role of the middleman in implementing development cooperation therefore function as policy enablers and representatives of the German government.

The aforementioned severe lack of transparency in the German development cooperation system leads to discrepancies and/or to a complete absence of information regarding the amounts granted and recipients of government funds.

In practice, Germany provides funding to a select group of highly interconnected NGOs that share board members and are part of common umbrella groups and networks. These NGOs also conduct evaluations for and provide information to the government, while there is no indication of independent external actors providing evaluations of the NGOs’ activities and effectiveness. This tight relationship results in a closed echo chamber in which the political NGOs exert immense influence in a way that does not necessarily reflect public interest or democratic norms.

The limited number of independent evaluations, when conducted, of Germany’s various development programs and projects reveal significant shortcomings. Most disturbing is that these reports are rarely made publically available, and when they are, they often fail to disclose details or analyze the roles of local implementing partner NGOs.

Furthermore, making a Freedom of Information (FOI) request is not always an option in Germany, as public sector organizations are allowed to charge very large fees for providing information (up to €1000 per request), and requests can be refused or remain unanswered without indicating the reasons. Actions carried out by government-funded NGOs are not subject to FOI requests.

The multiplicity of German funding frameworks for NGOs results in “double-dipping” – in which an organization is funded by more than one governmental framework, often for very similar activities and during the same timeframe.

Germany’s Federal Ministry for Economic Cooperation and Development (BMZ) and the Federal Foreign Office (AA) are two pillars of Germany’s development cooperation, with each ostensibly responsible for varying areas of policy.8 Specifically, AA has the formal role of overseeing activities related to humanitarian aid and BMZ is responsible for activities related to structural assistance in “fragile states.” However, there is clearly significant overlap in these agendas, specifically in the areas of crisis prevention and conflict resolution. For example, both BMZ9 and AA are currently supporting “media awareness” and “advocacy” projects in the field of conflict management in the Ukraine.10 In the absence of transparency, the extent of coordination, if any, is unclear.

Another example of double dipping occurs when local NGOs receive German government funding from multiple agencies during the same time period. For instance, in 2017, the Israeli organization Physicians for Human Rights – Israel (PHR-I) received funding from the government ministry AA as well as from the government-funded NGOs Bread for the World and Medico International (see below). 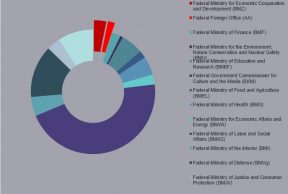 In order to ensure that funds for development cooperation are used efficiently and appropriately, and without waste, corruption, or counter-productive political results, both donors and recipients must be accountable for aid expenditures. NGO Monitor recommends the following: 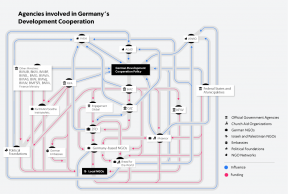 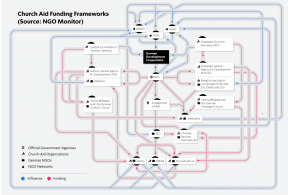 Germany has a longstanding tradition of granting public financial support to independent organizations, as well as to several quasi-governmental organizations that implement government policies but are managed independently. These practices further blur the line between direct and indirect government funding in Germany. Several grantees are well-established, independent NGOs that take part in government programs and initiatives in addition to receiving public grants for their own activities. Aside from nurturing partnerships with highly politicized local NGOs, these organizations engage themselves in political activities in Germany and foreign countries. German and international NGOs publish their project information voluntary and therefore lack transparency and accountability.